Yeah, it was a pretty good week.  For a change.

First off, I mentioned last week that I was going to stop in to a little thrift that I had never been to.  Turned out to be not worth the trip.  It was a tiny little place, mostly women's and children's clothes.  But it was run by dear little Church Ladies, so it was fun to at least visit.

Anyway.  We usually do the bulk of our thrifting on Sundays, but this week we went to the Hubster's office and we filed and shifted files and basically worked our tails off instead.  The reward, of course, was to go thrifting on Monday since we were both off.

What we weren't expecting was the mob as Savers.  I had gotten an email saying they were having a 50% off sale on clothes and bed/bath, departments neither Hubs nor I are interested in.  Turns out, they were giving 50% off everything and word must have gotten around because the parking lot was jammed.

Well.  So back to the Hubster's office for a minute.  While we were there, I took a couple of pictures of his glass collection, in case anyone's interested: 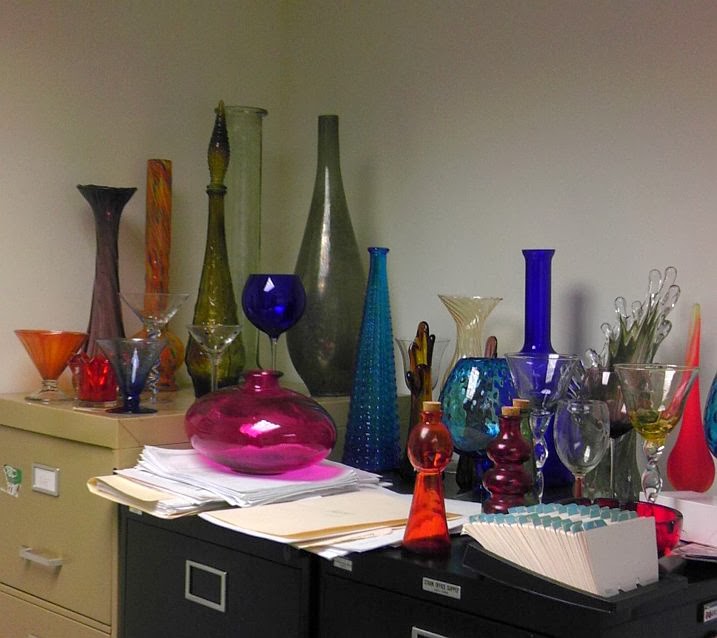 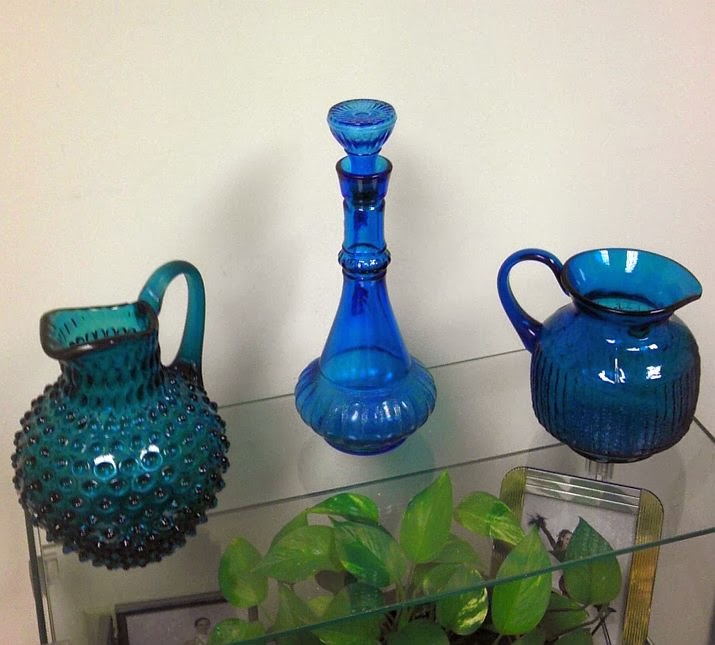 As I told him Sunday, "If you ever decide to have a Margarita party, you're set."

We did hit our usual stops on Saturday.  Nothing at the Goodwill, but I did find a couple of things at the Rescue Mission thrift.  I always feel bad when we go there because we hardly ever buy anything.  It's one of those places where you pick out what you want, take it up to the front, and the person there makes up a price.  Not my favorite way of doing business, but the people there are nice, so I don't mind. 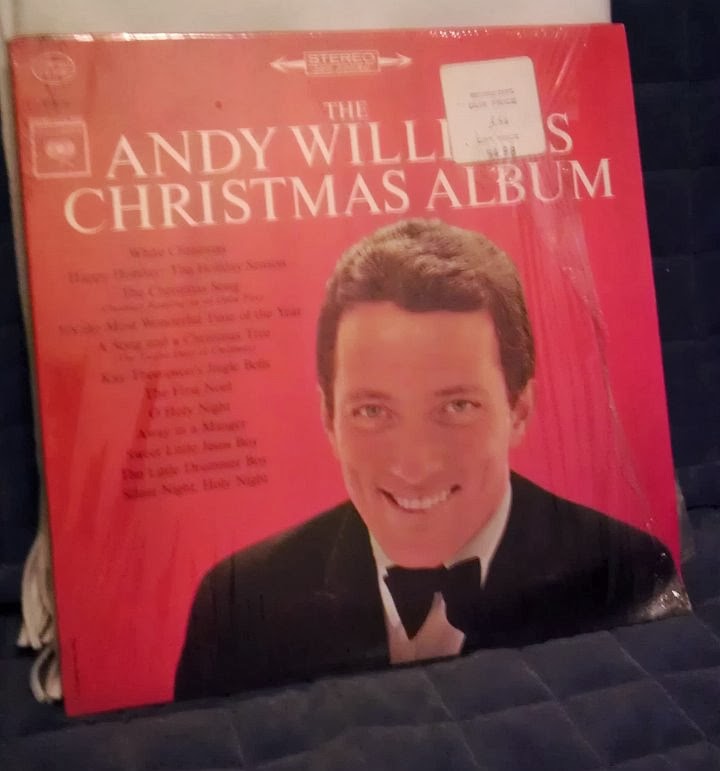 1.  Andy!  Again!  Yeah, I realize I just bought this album a couple of weeks ago, but I saw it sticking out and thought I could finally make a purchase. Plus, the cover's in better shape than the other one and still has the plastic on.  Rescue Mission thrift, $1.00 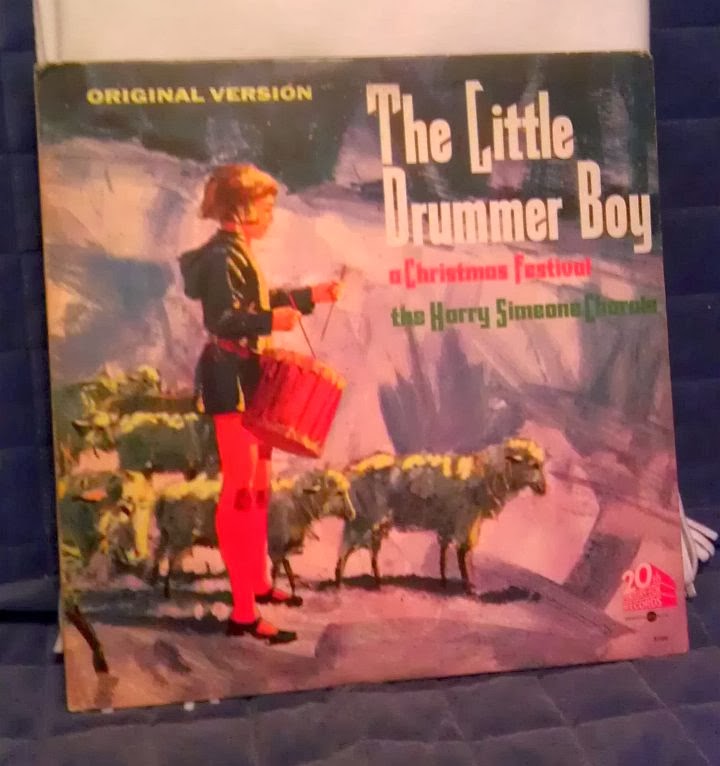 2.  Little Drummer Boy!  While I was grabbing Andy, Hubs started flipping through the records and came across this.  His family used to own it when he was but a tiny tot, so we bought it.  The jacket isn't in  very good condition and the record itself has a lot of wear, so we got it mainly for sentimental reasons.  Rescue Mission thrift, $1.00 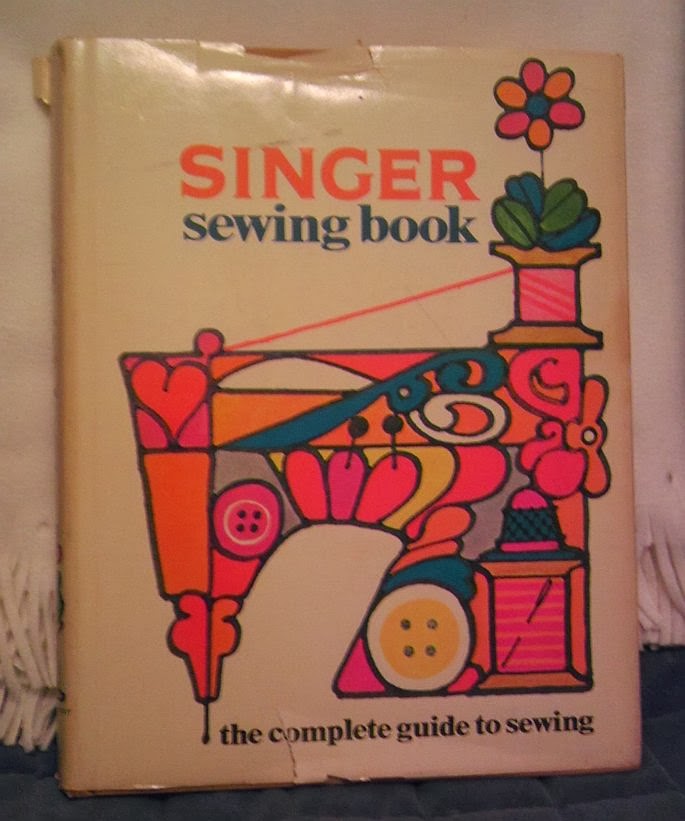 3.  Singer!  I had seen this book last week and meant to check whether I already owned it or not.  Of course, I totally forgot, so I just up and bought it because I figured it wouldn't hang around forever.  Turns out I don't own this particular one, but a slightly newer edition.  Well, no big deal.  I can either try to sell this on ebay or just re-donate it because it was only a buck.  Rescue Mission thrift, $1.00.

And remember--"What's new for tomorrow is at Singer today!"

I just realized that I saw two individual end tables this weekend that I totally would have bought if they had been pairs.

I'm going to save the best for last, so here's what I got on Sunday. 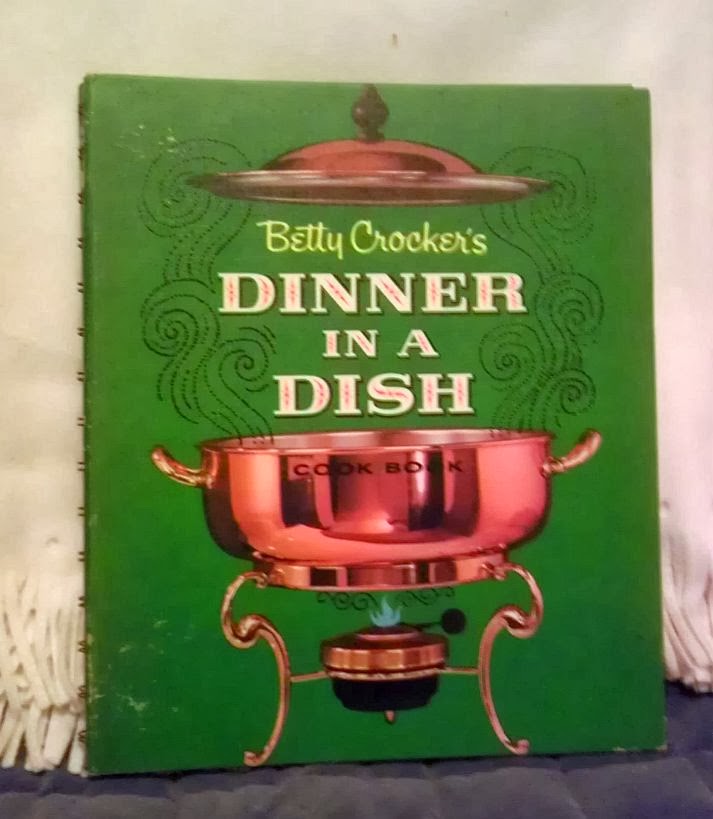 4.  Dinner in a Dish!  Here's another Betty Crocker cookbook that I just had to have.  I've seen some recipes from this book on some of the foodie blogs I read, and it looks like there's a lot of hilarity inside.  I picked it up and told Hubs that I was only going to get it if A) the checkout lines weren't too bad and B) I found something else.  Savers, $1.00 (half-price day.)

4a:  Disappointment!  I have been on the lookout for one of those microwave turntables because my microwave is quite old and doesn't have one (it's a genuine Radar Range, and when you close the door, it's like closing a vault.)  So I was pleased as punch when I found one in a plastic bag on Savers' Wall O' Crap.  Unfortunately, it didn't work, so it's getting tossed.  Well, you win some, you lose some, right?  Plus, it was Half-Off day, so it was only $1.50, and there were two random spoons in the bag as well.

Have you seen what those turntables go for on ebay?  Crazy.

Okay, now for my Big Find.  Well, big for me. A lot of you find really cool stuff all the time.  Me, not so much.  So I was quite pleased to bring this home: 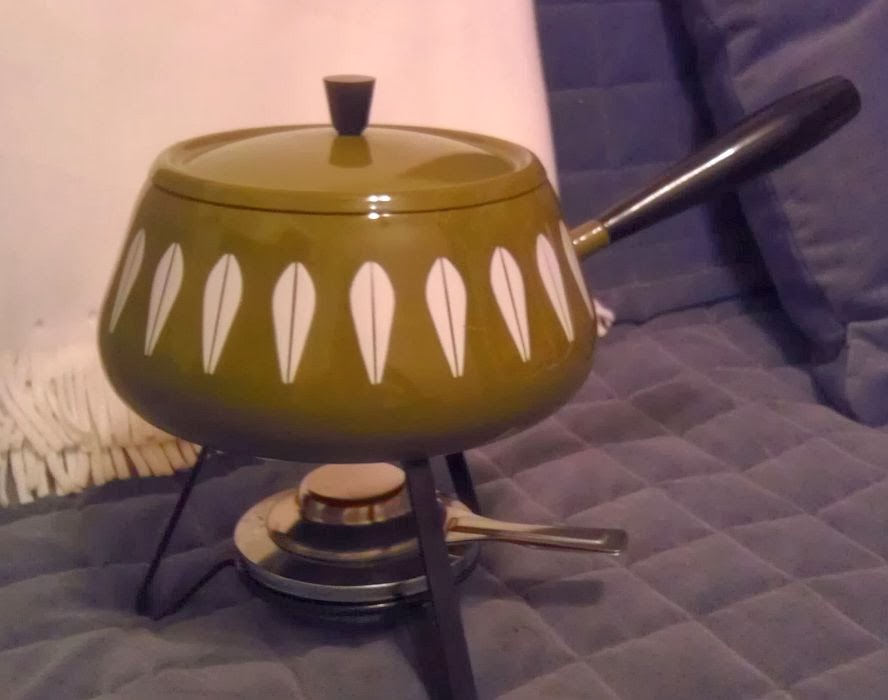 5.  Cathrineholm!  I saw this out of the corner of my eye and immediately thought "That's not Cathrinholm, it's some Japanese knockoff, right?"  So I picked it up and nosir, it's the genuine article!  No chips, no dents, one small scratch on the side.  The lid and stand were taped to it and the burner was inside.  I did a little happy dance!  It looks kind of pea-green here, but it's actually avocado.

I guess you want to know how much I paid, huh?  Well, I'll tell you.

Are you sitting down?

Second happy dance!  And that's not even the best part!  The best part is that I managed to grab it before Douchebag Guy* got his grubby mitts on it!  I kept wanting to prance around, waving it in his face and singsong "I got it and you didn't!"

Yes, I'm a terrible, terrible person.  I'm not proud of myself.

And you can bet I've already posted this puppy on ebay!  Special thanks to the Hubster, who determined that I spelled the name wrong in my listing (I thought it was Catherineholm.  Turns out it's not.)

And while I was at it, I posted a couple of other things on ebay, including the patterns I got a couple of weeks ago.

*Douchebag Guy:  This is a guy who is always at the Goodwill, checking the value of things on ebay, scarfing up everything before anyone else can get to it. Clearly, he's a reseller and this is how he stocks his store.   I once stood behind him in line while he bought--literally--$429.83 worth of stuff.  At the Goodwill.  So you can imagine the sheer volume of stuff.  I had one item in my hand, and he didn't say "Why don't you go first?", as I would have done.  Hence his name.

Well, so kind of exciting, no?  This was the best week of thrifting I've had in quite some time.

Oh, wait.  I almost forgot.  Time for our

Weekly Dose of WTF  Saw this at the Goodwill and at first I couldn't figure out what it was.  I think it's a monkey.  I always like when people leave the batteries in things like this.  Enjoy the video.

What with one thing and another happening this week, I hardly had to do any cooking at all.  So I made 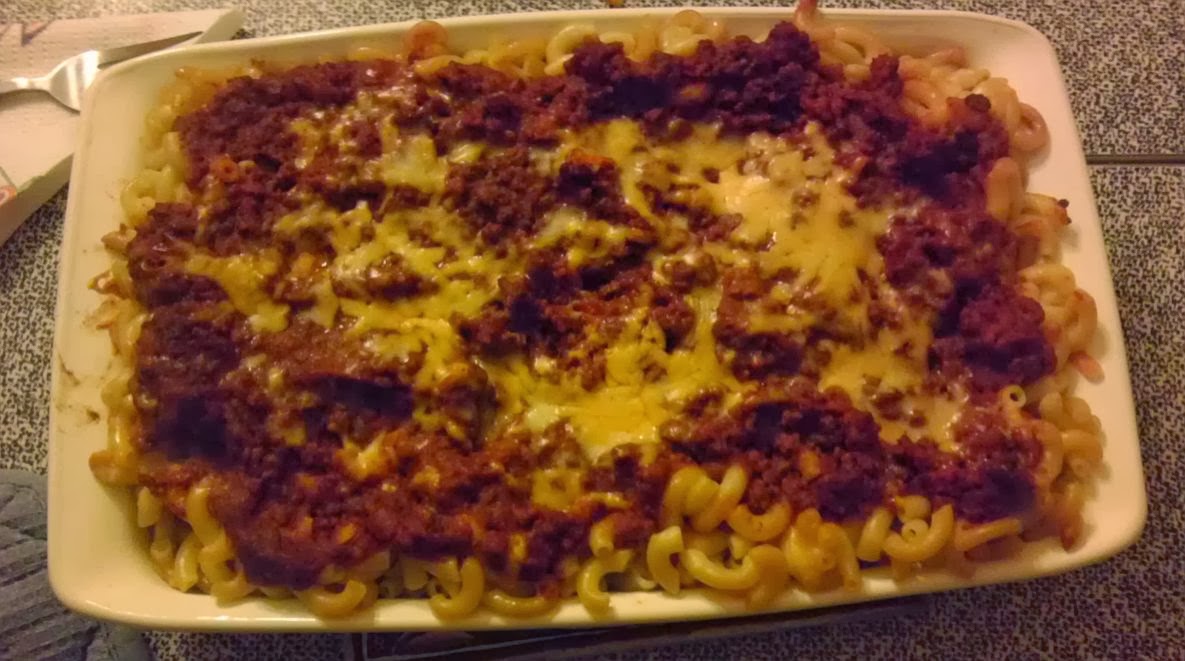 Renae's Taco Bake!  This recipe came from (I think) a Taste of Home cookbook.  It's basically Chili Mac, so nothing to get excited over.

Meanwhile, it was 50 degrees yesterday.  Today, they're calling for 6-10 inches of snow.  Sheesh.

Since I actually found cool stuff this weekend, I'm proudly linking up with Sir Thrift A Lot, Thrifter/Maker/Fixer/Farm, The Nifty Thrifty  and We Call It Junkin.