Wowsers.  Saturday (two Goodwills and the Rescue Mission thrift) yielded nothing at all, and I was a bit disappointed.  On the other hand, I do have this potential for being a hoarder, so I decided it was a good thing that neither Hubs nor I found anything.  On a positive note, I returned my equipment to the cable company and it took less that 15 minutes, so I'm happy about that.

Then we made our Sunday rounds, and things started picking up.  Hubs is getting really good at spotting cool stuff from across the store, which is paying off well for both of us!  I'm only going to show what I bought, but Hubs got a number of small colored glass pitchers, an enormous amber glass bottle, a smaller blue-green bottle, and I forget whatall else.  Here's my haul:

Stuff too mundane to take a picture of!  I got a couple of paperback books not for reading, but to prop up the head of the bed.  Supposed to help with reflux. I also picked up one of those button attaching gadgets so you don't have to sew on buttons.  That was .99 at Savers. 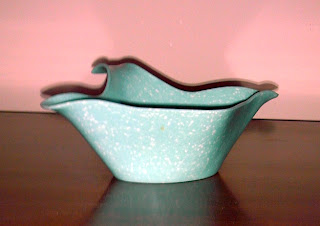 Gravy boat!  I've been looking for a gravy boat that can go in the microwave.  Unfortunately, 99% of the ones I've seen have a gold or platinum band.  This is (unmarked) melamine in a lovely aqua and white spatter pattern.  We used it last night.  I can't remember what I paid.  Maybe $1.00 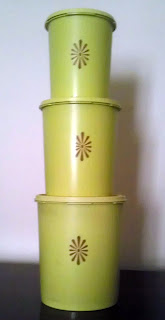 Tupperware!  Tupperware sightings have been few around here, so I was really glad to find this set of canisters.  I've been wanting something to keep coffee, brown sugar, and my cereal at work in, and managed to cover all three bases with this one purchase.  They look green, but they're really yellow (I need to stop using the camera in my phone.)  The big one had some grime on the outside that resisted scrubbing and dishwashering, but it succumbed to the mighty Mr. Clean Magic Eraser.  There's still a funky smell inside the big one  and what looks like some residue.  It's soaking in a baking soda solution right now and I think I might scrub it out with some Dip-it as well.  $5.00

Blue bottle!  This is one of the treasures that my wonderful husband found.  If I didn't want it, he was going to keep it for himself, but the color is right up my alley.  I'd say it's a good 18" tall.  It's currently on top of my bureau and it looks great.  There's a small chip on the neck, but it's not noticeable.  I'm pretty sure I've seen this exact bottle (in amber) in an old Montgomery Ward Christmas catalog.  Again, apologies for the crappy pic.  $4.00 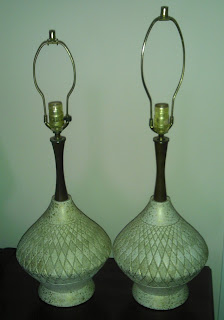 Lamps!  These babies were nothing short of a miracle.  I'm always on the lookout for cool lamps, but most of what I find in the thrifts are just downright ugly.  On the off chance that I do find a cool one, it's always a single and I'm always looking for pairs (I like matchy-matchy: sue me.)  Wellsir, we popped into the "Disappointing Goodwill" where we never find anything, and it was here that I managed to snag these lamps and that gravy boat.  This is also where hubby got the gigantic glass bottle.  So you never know.  But aren't they great?  These will go on our nightstands.  And now here's the best part--they were $14.00.  For the pair.

They need shades, obviously, and I kind of dread doing that because picking lampshades is not a talent I have.  Isn't there some formula for determining the size?  Like "twice as wide and half as high" or something?  Can anyone help?  They're sort of beigey and off white and I put a plain white shade on to see what it looked like, and it looked too white.  So maybe a tan shade?