Thrifting Finds #31: Have yourself an absolutely horrifying little Christmas!

Once again, hubs and I didn't find much on our rounds this weekend, but something I stumbled across turned out to be the highlight of the day.

But first, let me rant a bit.  What is up with the Christmas stuff around here?  I keep reading all these blogs where people come across the mother lode of Shiny Brites or shelf after shelf of Lefton elves, or blowmolds up the wazoo.

And I'm totes jelly, as the kids say.  (Actually, do they still say that?  I'm kind of behind the times.)

We hit seven thrift stores this weekend, and while I found a lot of Christmas stuff, 99% of it was recycled dollar store crap.  The rest of it was just ugly.  Where's all the good stuff?

Other than crappy Christmas stuff, I also came across a bunch of Pyrex, most of it horribly abused.  I even saw a couple of pieces of English Pyrex.  I didn't take a picture, but it seems a little more opaque than the typical American opal glass.  Closer to Corelle, actually.

Anyway, on to what I found. 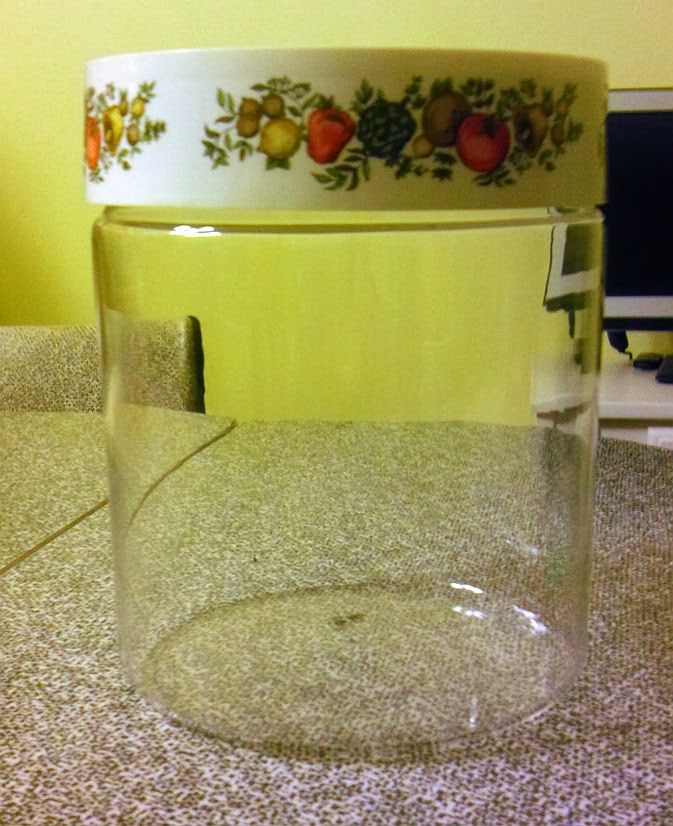 1.  Pyrex!  It's been a while since I bought a piece of Pyrex, and I'm glad I came across this.  I already have a couple that Mom bought back in the '70s.  These are really great storage jars.  I needed something to keep flour in and was looking for some Tupperware, but I got this instead.  Pretty sure it won't hold a whole 5 pound bag, but it should fit in my freezer.  $3.00 Goodwill

I almost got a Scumbuster at Savers, but the lines were so long that I didn't feel like waiting.

Speaking of Savers, I did find something there of note.  I didn't buy it, but I took a video of it

Because it's so horrifying.

This thing is horrifying on so many levels--the club foot, the creepy voice.  But the face--that scary, I-want-to-eat-your-soul face--just really did me in.  How fortuitous that the person who donated it left the batteries in so you can get the full effect.

What I Made This Weekend department 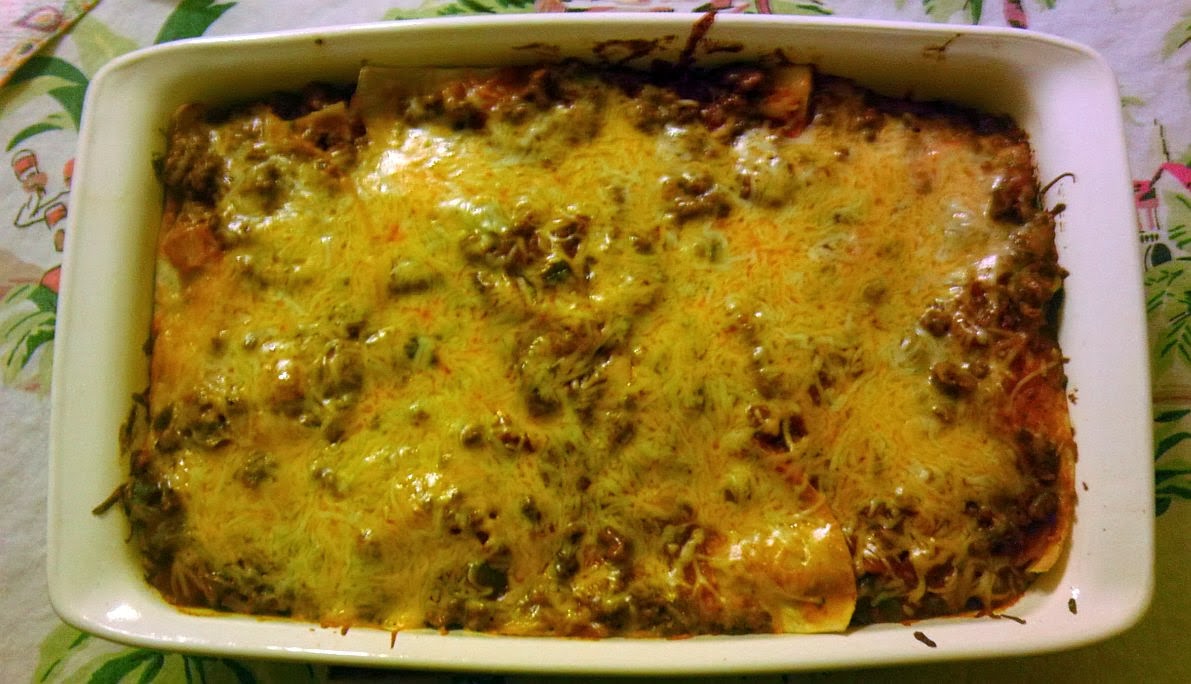 A.  Dan L's Enchilada Casserole  My friend Dan sent me this recipe a while back and I love it not just because it's from my friend, but because it originated in the Mexican food capital of the world:  Council Bluffs, Iowa.

Brown ground beef with the onion.  Drain and return to pan.  Stir in refried beans, enchilada sauce and salsa.  Simmer a few minutes.  Put a little of the sauce in the bottom of a greased 9X13 inch baking dish (vintage Corningware preferred) and add a layer of corn tortillas.  Layer sauce with tortillas until you run out of materials, ending with the sauce.  Put cheese on top and cover with foil.  Bake 30 minutes at 350 degrees.  Take off foil and bake another five.  Let sit at room temperature 5-10 minutes before attempting to serve.

*I leave the beans out because ew. 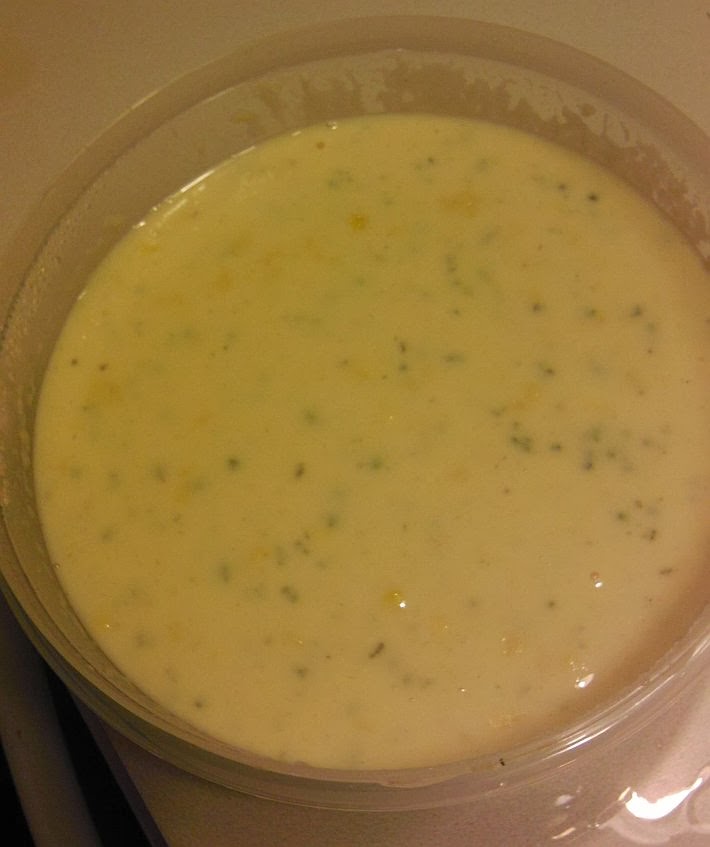 B.  Potato, bacon and corn chowder  Okay, I'll admit it--this isn't the best picture.  I'll take another one tonight when we actually eat it.  It'll have bacon bits on top and some lovely cheese melting in.  I got this recipe from Carnation evaporated milk and it's so easy it's embarrassing.  Still, there's something to say for an easy recipe that's delicious and made with stuff you're likely to have in your cupboards.

EDIT:  Here's what it looked like last night when I served it: 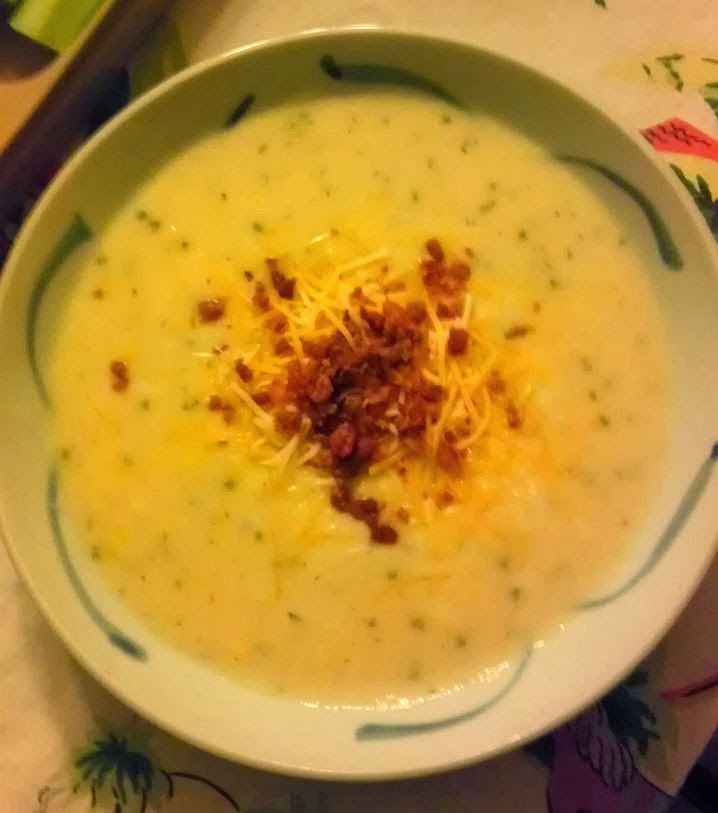 In other news  I had my car detailed last week!  I always thought that sort of thing was only for self-indulgent BMW drivers.  Then a while ago, hubs got a coupon for a free (!!) detailing, and man, what a difference!  He liked it so much that I got him a gift certificate for detailing last Christmas.  (There's an impossibly cute story about hubs and me giving each other identical presents last Christmas, but it's so nauseating that I'll spare you the details.)  Anyway, I finally got to use the gift certificate that hubs gave me last year.  Man, oh man, it's like having a brand-new car again!  Everything is so clean and shiny--and they totally got the coffee stains out of the mats.  The only problem is that they go kind of crazy with the Armor All.  There's a plastic mat/tray thing in the back of my car to protect the carpeting from dirt and stuff, and with all the Armor All they put on it, it's slippery as Teflon.  We did the marketing this weekend and every time I turned a corner, our groceries did a little Indy 500 thing back there.  If you're looking for a gift for a hard-to-buy-for person (hubs knows I am way too cheap to ever buy this for myself), I recommend this.

Also  I finally put the Eames coat rack and the free laptop I got up on ebay this weekend.  I already have bids on both!