As you can probably tell by my light 'n breezy tone, this was a significantly better week for thrifting than I've had lately.  I didn't get anything that I could resell for a fortune, and everything I got was useful and practical, but I'm happy with each and every purchase.

We did not go to the second part of the estate sale that I reported on last week.  Not for any moral reasons you understand, we just got a late start yesterday.  We would have arrived at the sale a half-hour before it closed and it didn't seem worth making the side trip.  I'm still signed up with estatesales.net, so if anything comes up, we'll give it another shot.

Anyway. On to what I got! 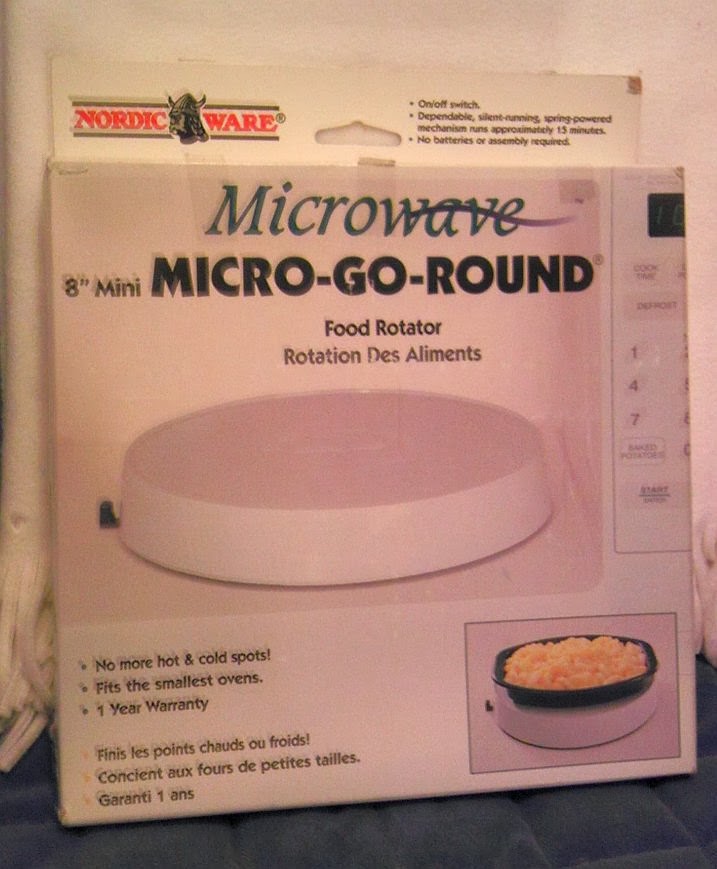 1.  A Food Merry-Go-Round!  I've noticed that the food in my microwave just isn't having a very good time, so I got it a little ride.  This is actually the second one I bought, the first turned out to be a dud.  This was just on the shelf so I could open it up and test it before purchasing.  I don't think it had ever been used. Savers, $4.00 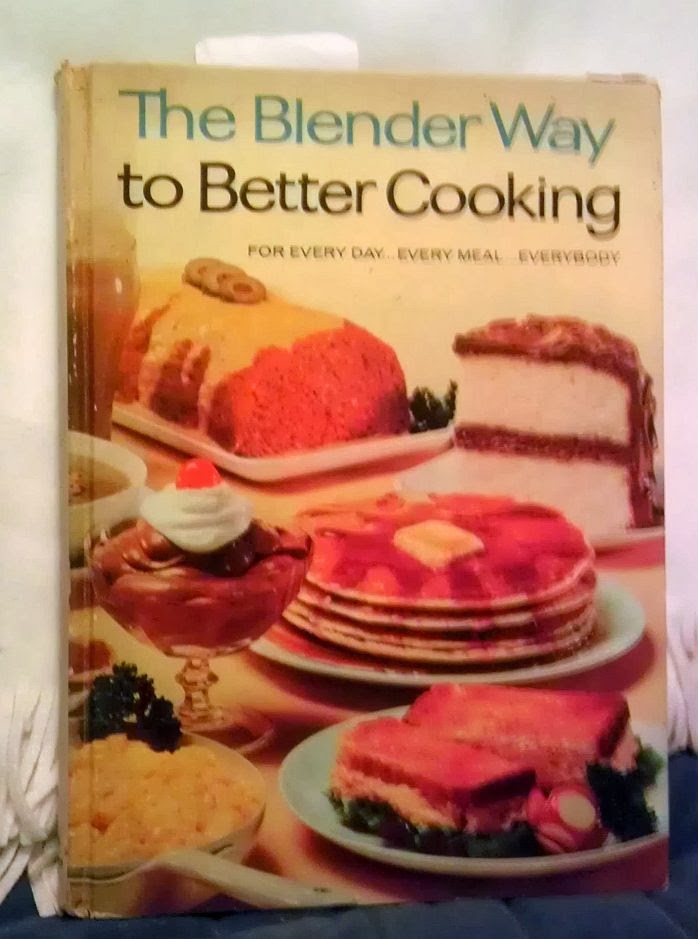 2.  Another cookbook? Yeah, but look--it's not just any old way to Better Cooking: it's the Blender way!  I don't use my blender very often and I ran across this cookbook in an old ad somewhere and thought I'd see if I could find it.  Well darned if it wasn't just staring at me from the shelf at the store.  It's one of those typical blender cookbooks that has recipes for things like Cornish Game Hens--22 ingredients, only three of which actually become acquainted with the blender.  And even then, it'd be easier to just pull out a knife and chop by hand.  Once I stopped paying attention to the strained blender involvement, it turned out to be not half-bad.  Couple of things I want to try, actually.  Rescue Mission Thrift, $2.00 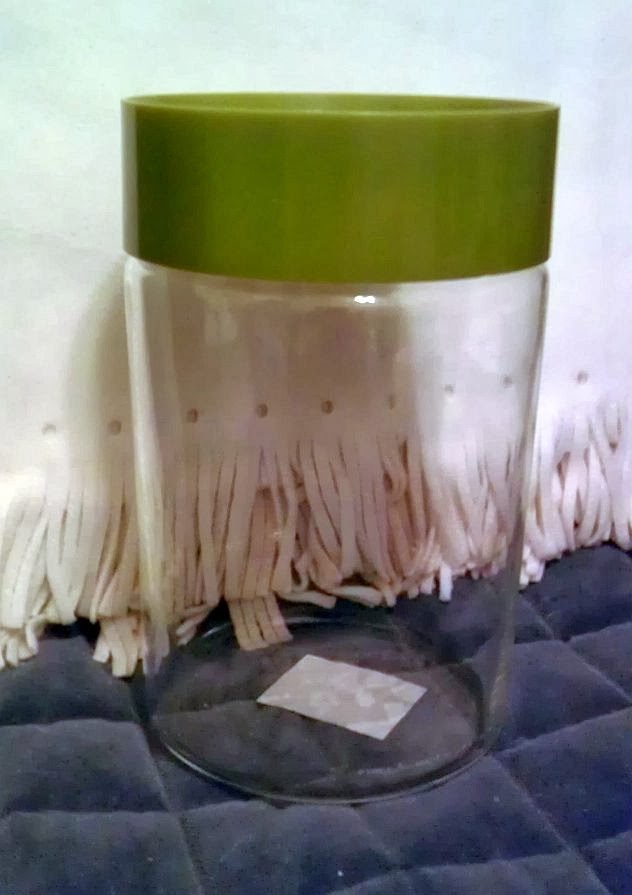 3.  Pyrex!  After making the rice that went with last week's Lemon Chicken, I discovered that the jar I had been using to store it smelled funky.  Perfect excuse to buy another piece of Tupperware, right?  I thought so too, until I came across this which is the right size, I think.  Savers, $3.00
Oh, P.S.:  Regular rice is kept in Tupperware.  Converted rice in Pyrex.  See how organized I am? 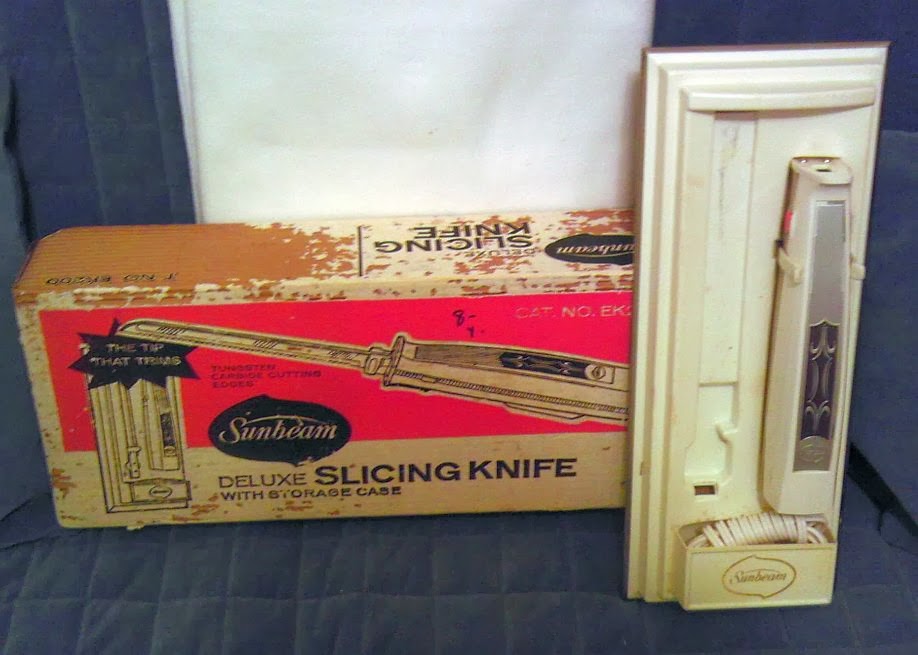 4.  New Electric Knife!  I was pretty pleased to find this baby--new in box, never opened.  The box was in kind of bad condition--clearly stored in a hot attic for years, which started dry-rotting the paper, but it's not like I'm going to keep the box anyway.  I loved my old Sunbeam electric knife but it died and I've been using some soulless Black and Decker horror that was made in China.  So I'm really glad to have this back in stock.  The storage rack is going because I don't need it and have no room for it.  Goodwill, $8.00 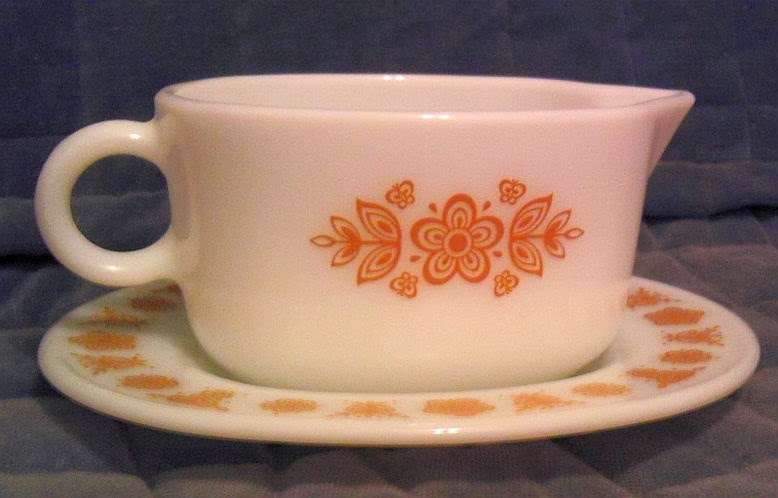 5.  More Pyrex!  I'm always on the lookout for a gravy boat that can go in the microwave.  So many of them have a gold or platinum band (that makes a dramatic display when you microwave it. Ask me how I know.)  Butterfly Gold isn't a pattern I collect (or even really like), but I couldn't pass up this little beauty with its matching saucer, especially when they also had a Spring Green gravy boat without the saucer for a buck more.  Naturally, I'd prefer blue cornflowers, but one can't always have what one wants.  Goodwill, $3.00. 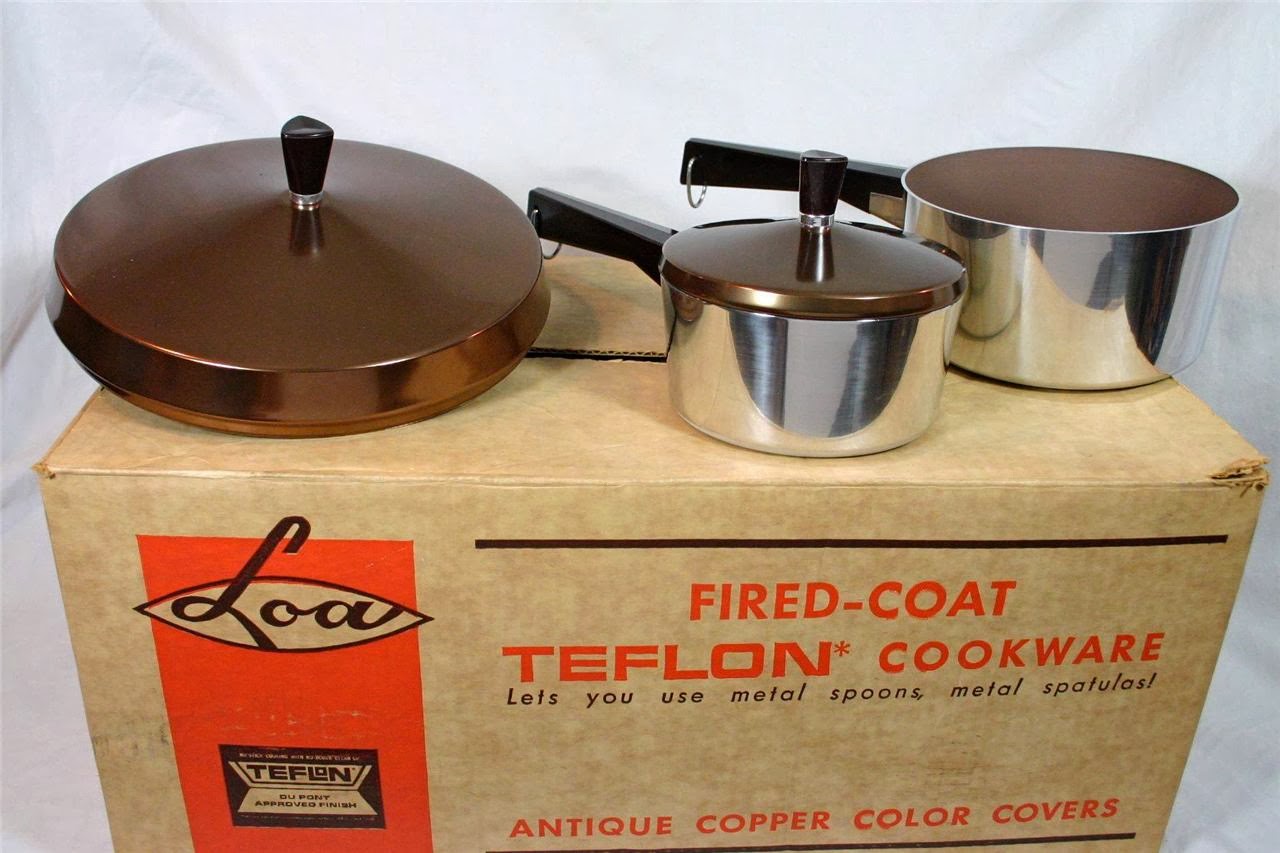 It's always a good day when the vintage cookware arrives!  I had a set of Wearever Bounty cookware that said you could go ahead and use metal utensils.  Unfortunately, I did, and it didn't turn out well.  So I found this set on the 'bay and won it.  With shipping, it came to like $31.00, which I think was pretty good. One, two, and three-quart saucepans, small and large skillets and a 5-quart Dutch Oven, all with matching lids.  Brand new, never used. I'm really liking cooking in them, and despite what the instructions say, I will not be using metal utensils.  I've also learned not to put shiny aluminum in the dishwasher.

A:  Guacamole!  I've spent quite a lot of my life scraping guacamole off things under the assumption that I don't like it.  Well, when Aldi had avocados for 59 cents, I got one, thinking that they're really good for you and that maybe I should just suck it up:  one avocado ain't gonna kill me.  Once it got ripe, I pulled down my BH&G Cookbook and sort of followed the recipe--it called for lemon juice, salt, and chili powder.  I added some brown mustard as well for a little kick.  Wellsir, it was delish.  I had to force myself to not eat the whole bowl.  The Hubs said it was good, but unlike any guacamole he had ever had.  Unfortunately, I made the rookie mistake of thinking that closing up the leftovers in some Tupperware would keep it from discoloring.  Not so.  The next day it was sort of brownish-purple, the color of a really dandy bruise.  Ugh.  I'll know better this time. 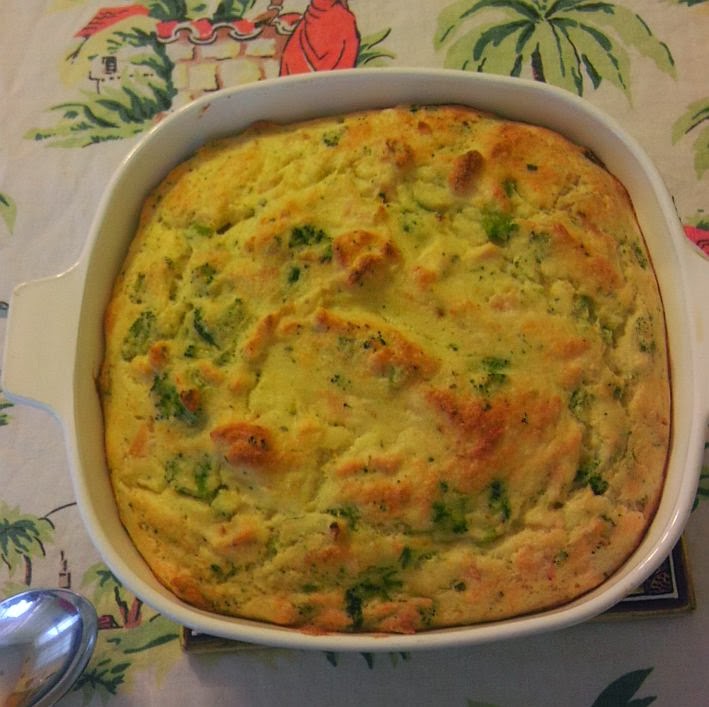 B:  Potato Puff!  This recipe came from Dinner in a Dish that I got a while ago.  How to describe it?  Well, it's chicken, cheese, and broccoli (the recipe called for carrots) mixed in with mashed potatoes and egg yolks, then lightened with stiffly-beaten egg whites.  Sort of a souffle for imbeciles.  Odd, no?  Naturally, I had to try it.  And really, once we got over the initial shock, it was darn tasty!  I'll tell you though, I had some doubts about serving this.  Once plated, it was ugly.  I mean really bad.  Like something the dog couldn't keep down.  Luckily, it smelled good, so that was a plus.  And I got to pull out the MIghty Kenmore to whip those egg whites. so another plus.
On the other hand, I had to whip egg whites, and then fold them in.  I don't fold; it's too much work.  And I don't normally go to that much trouble for an ordinary dinner. Plus, it had to be baked in a bain marie.   And it took forever; after an hour in the oven, the middle was still jiggly.
It was good enough to try again, though Hubs and I decided next time to forego the eggs entirely.  And I think I'll sprinkle more cheese on top.

And that's it for this week, kids.  I'm proudly linking up with Sir Thrift A Lot, Thrifter/Maker/Fixer/Farm, The Nifty Thrifty  and We Call It Junkin.