I often lament the fact that I hardly ever find anything at the Goodwill.  Maybe every 20th trip or so I'll find something that's worth buying.  I can't complain too much, though, because space in my house is limited and I have definite hoarder tendencies anyway, so I'm probably better off with things the way they are.
So what changed this weekend?  I found several things at a couple of different Goodwills, something that never happens.  Sorry for the varying quality of pictures; sometimes my phone takes really good pictures, other times not so much. 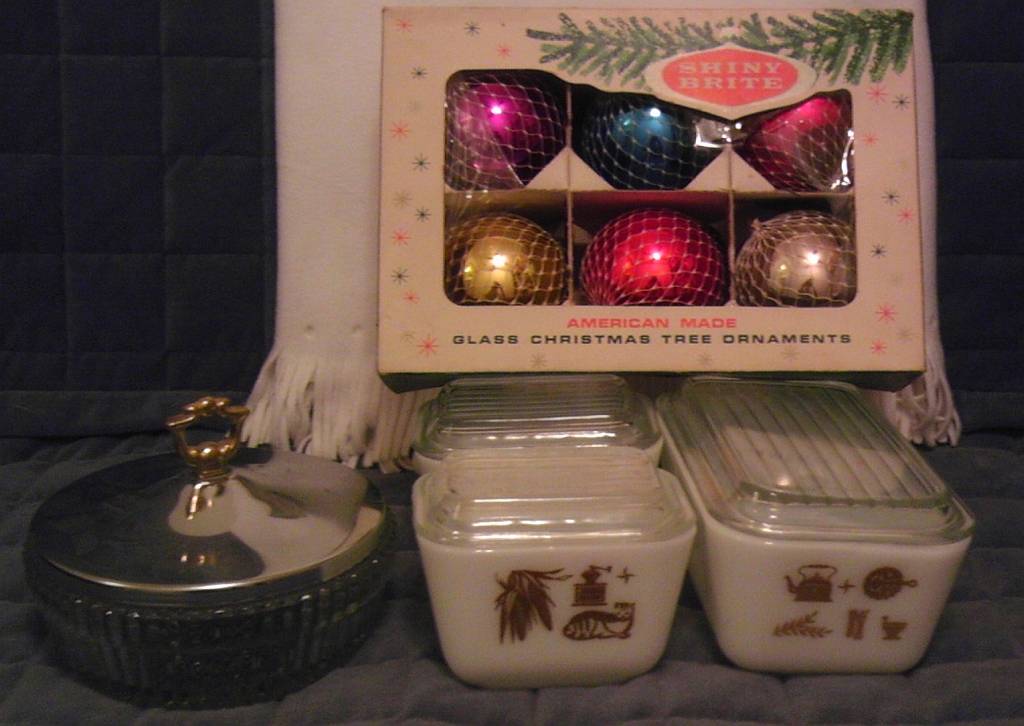 Shiny Brites!  Can you believe it?  First sighting in a GW ever.  There's a nice purple one in the group (Hubby's fave color) so I think I'm going to keep these rather than resell 'em.  Not sure how I feel about the netting, but I think it'll be okay.  $3.00

Kromex!  This little covered bowl fits the middle of a lazy susan I already have (also thrifted) that I actually use for entertaining, so I'm keeping it.  $3.00

Pyrex!  Made two huge mistakes with these suckers.  First, I went out to the car to get my $5.00 coupon and while doing that, some old guy beat me to the biggest container of the set.  Lesson learned:  grab first.  Later, I looked at a Pyrex book and the author said (and this is almost a direct quote)  "Nobody collects this pattern because nobody likes it."  Yikes.  Well, I guess I'll eventually throw 'em up on ebay unless I hear from someone who wants them.  Kind of a shame really.  Though they're really not my style, wouldn't they have looked great in Betty Draper's knotty pine kitchen?  $2.00 each for the small ones, $3.00 for the big one.

Floorbuster!  Wow, this picture came out really bad, and I'm not sure why.  Anyhoo, this baby was absolutely immaculate, which is why I bought it; the thought of using someone else's grungy old vacuum kinda skeeves me out.  I'm guessing it was a wedding gift used once to try it out, then tucked away. We had one of these years ago and it was really handy; Mom used it when lugging out the big vacuum got to be too much for her.  It's got a beater brush so it does a decent job on carpets if you just want to give them a quick once-over.  Came with two sets of batteries and a charger, but I fear the batteries are no good.  I'll have to buy some replacements but I don't mind because Black & Decker discontinued this some time ago and you can't get it any more.  $15.00, but I used my $5.00 coupon on it. 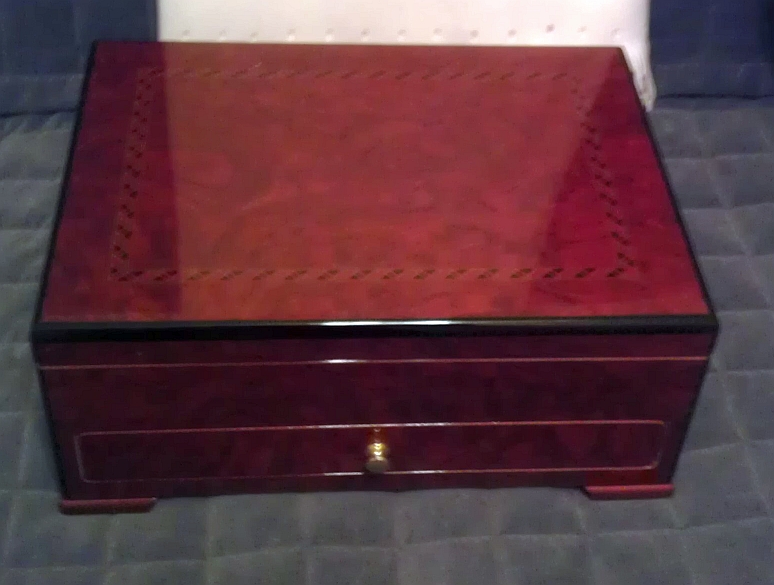 Jewelry box!  I have been looking forever for a plain, simple jewelry box that isn't A) ugly or B) girly.  It's been a longer quest that you'd think.  I came across this beauty in one of the carts of stuff that hadn't been put on shelves yet. The lady in front of me at checkout said that if she had seen it first, she'd have pounced on it.  It's beautiful burled wood (elm?) with a simple inlaid border.  It's way bigger than I need, but I couldn't pass it up.  Like almost everything I picked up this weekend, it looks to be unused.  $8.00.

Hoping I can talk the hub into going thrifting again this weekend, as we have a couple new places to try. There's a Savers opening up in the area (the first one) and it's right on our regular thrifting route.  Also, while we were doing the marketing, our favorite checker at Weis told us about a mission thrift store that I never knew about, so we're going to hit that one, too.
Posted by veg-o-matic at 1:02 PM