Whew.  It was a busy week here at Fondue Headquarters and frankly, I'm pooped.

It was the Hubster's birthday last week, so I surprised him by importing The Girl Child for a visit.  I tried surprising him on his birthday a few years back and it turned into an absolutely hideous nightmare, so you can imagine my surprise when I managed to pull this one off.

There was a lot of eating.  On Thursday, we drove up to PA to have lunch with some friends,  Delicious food, and lots of it.  Now, hubs and I generally only have one meal on the weekends or when we're not at work, but The Girl Child was having none of that.  So I had kind of a bad idea that we carried through.  Dinner Thursday consisted of hot fudge brownie sundaes.

Yeah, I told you it was a bad idea.

But see, we didn't get to have dessert with lunch, so we just kind of had it later.  So that makes up for it, right?  Right?

Side note:  Betty Crocker gluten-free brownies are pretty good, but they don't keep well.  Despite being tightly sealed, by last night they were brown concrete.

Friday was a big day because we got to meet The Boyfriend at lunch.  He's still kind of new on the scene, but we liked him immediately.  More important, he is officially Weiner Dog Approved.  Lunch was delicious and large, but that didn't stop us from going out to dinner on Friday night.  This was the hubster's official birthday dinner.  It was another lovely meal, and more calories than I care to admit to.

Saturday, we got to do our usual marketing and thrifting, as the GC was visiting some other family at the time.  We also got to make the rounds on Sunday, as the GC and Boyfriend weren't due for dinner until late.

Anyway, here's what I found this weekend: 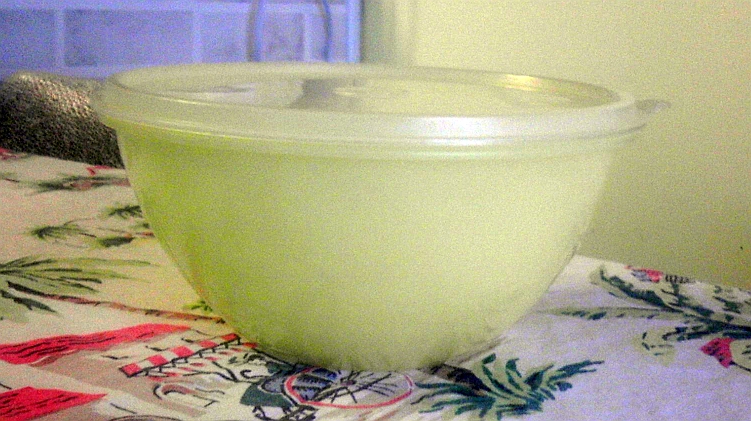 1.  Tupperware!  Sorry the picture came out so pale.  This is my first Wonderlier bowl.  Despite the millions of these that were made, they're really scarce, at least around here.  My goal, of course, is to collect them in all the sizes and colors available.  There was also a slightly smaller blue one, but it had the wrong lid and I decided long ago that I wouldn't buy any Tupperware without the proper lid. $1.25. 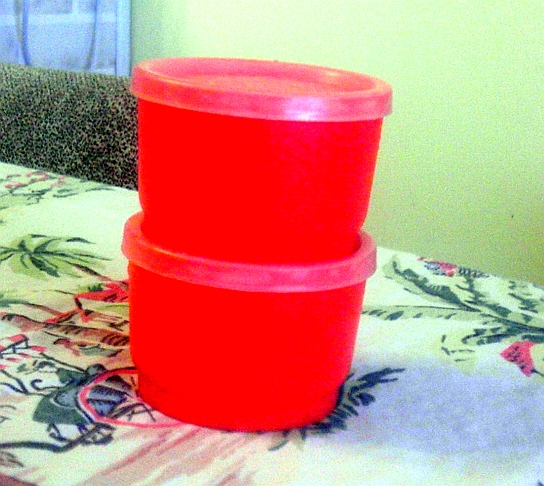 2.  More Tupperware!  I don't know why these are displaying as red, because they're really orange.  These are pretty small. holding maybe a couple of ounces?  I got them to carry salad dressing to work and they're the perfect size for that.  $.50 each. 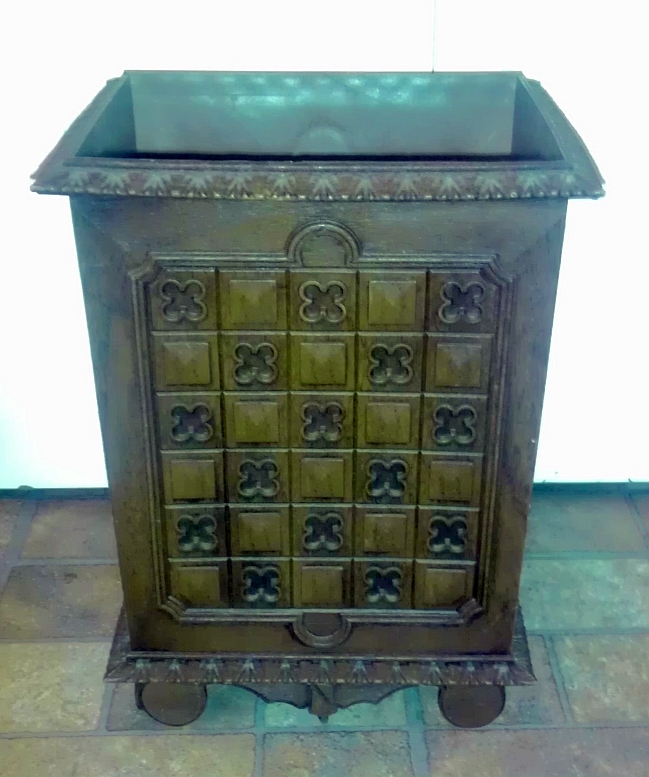 3.  King Arthur's trash can!  Again, I'm not sure why this is showing up the wrong color.  It looks pretty green in the picture but in real life, it's definitely brown.  I've been looking for a wastepaper basket to keep next to my desk that would sort of blend in, and this fit the bill perfectly.  Yeah, I know it's kind of sketchy to buy a used trash can, but this was nice and clean.  Oddly, they had another one exactly like this, but that one was really green.  Doesn't it look like something they'd have at Camelot?  $3.00

This was kind of a good week for Pyrex collectors, too.  In our travels, we spotted two of the big Cinderella bowls, one in pink Gooseberry (I'm pretty sure; the memory is the first to go...), the other in turquoise.  I don't know what the pattern is called, but it's the one with the hot-air balloons on it.

Linking up with all the fabulousness at Sir Thrift A Lot, and The Nifty Thrifty,