Wow.  It feels like it was a really busy weekend, when in fact it wasn't.  Maybe I'm just getting old.  Okay, definitely getting old, but you know what I mean.

We managed to cover almost all of our usual stops this weekend.  Didn't get to go to the Salvation Army because it was closed for Labor Day.  I kind of don't like shopping there because of their politics, but apparently, I'll sell out completely for a bargain.  Don't judge.

Yesterday was Half Price day at one of our Goodwills.  Gloriosky, I hope I never walk into that scene again!  The store was mobbed, every single customer had an overflowing cart full of crap, and people were just plain rude.  It was kind of like a summertime version of Black Friday.  Yikes.

Anyway, while I didn't get much at the thrifts, i did manage to pick up a couple of things that made me quite happy.  On with the show. 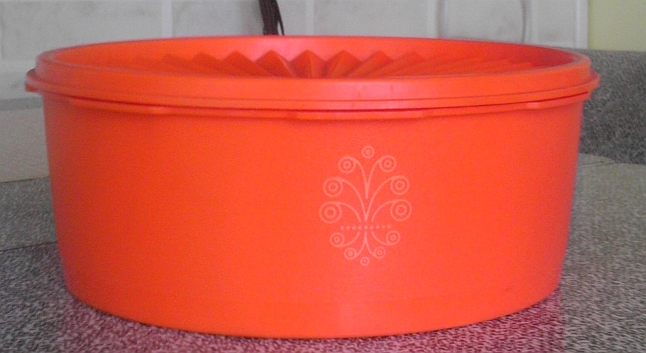 1.  Tupperware!  Okay, is anyone really surprised here?  I already have this size in lovely Avocado, but I'm really digging this orange.  I'm trying to up my consumption of vegetables and lower my consumption of potato chips at lunch, so I'm using this to tote a buttload of crudites to work.  Why?  Because I'm huge.  Hopefully, there's a wedding in my future, and I'd prefer not to look like a heifer.  Plus, it was only a buck at the Rescue Mission Thrift.  As an aside, this same canister in yellow was $3.00 at the Goodwill just down the street. 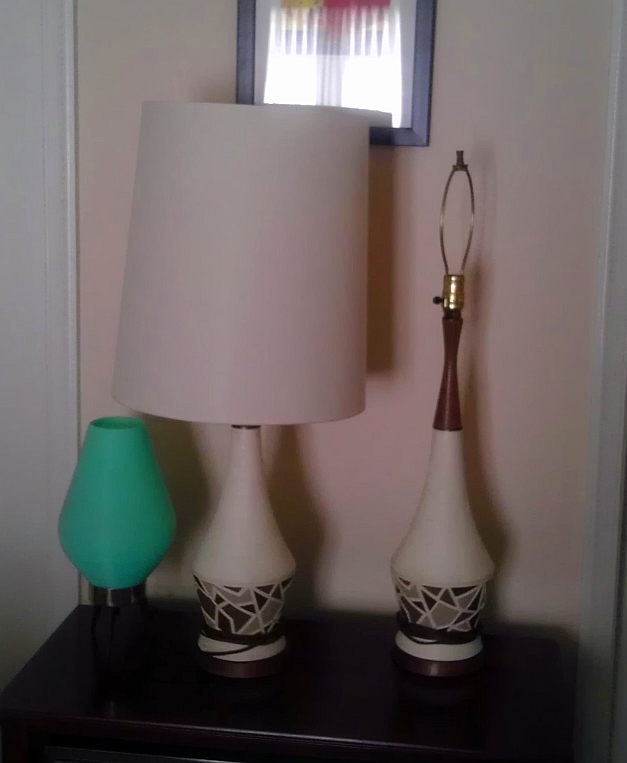 2.  Lampshades!  Can you believe it?  I thought I had used up our lampshade mojo, so you can imagine my surprise when I ran across these in the GW on Sunday.  I looked up on the top shelf where the lampshades are and saw what I thought would be a perfect shade for our new lamps.  Too bad there was only one.  Wait a second--it's really two shades stacked together!  I threw my keys at Hubby, said "Hold these" and scaled the display fixture.  Yeah, I have no shame.
Oops.  Wrong picture.  Let me just Photoshop in the other shade: 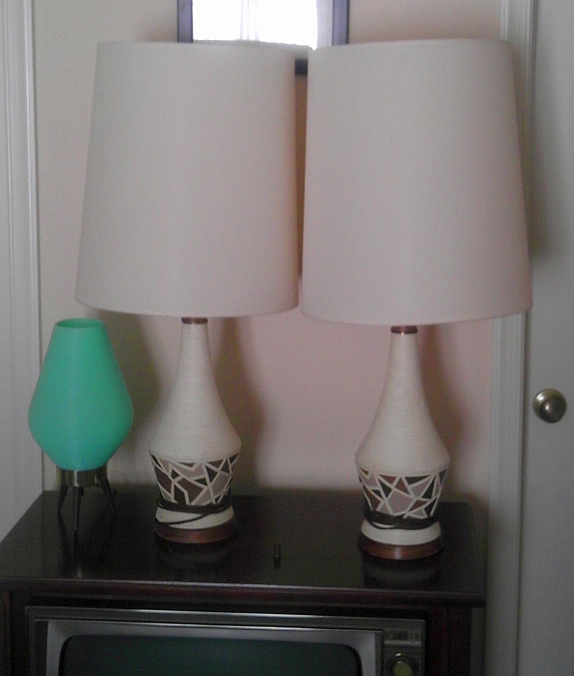 There.  Better.  Anyway, they were in great shape and only $4.00 each!  There may or may not have been a little happy dance; I'll never tell.  GW staff, in their wisdom, chose to mark the price on these in black indelible marker.  Does nobody have any common sense any more?  Luckily, the base of the shades is plastic and I was able to almost completely remove the price with some acetone.  Sheesh.  Of course, the harps that came with the lamps were far too small so I had to pick up some new ones.  Here's what it looks like in finished form: 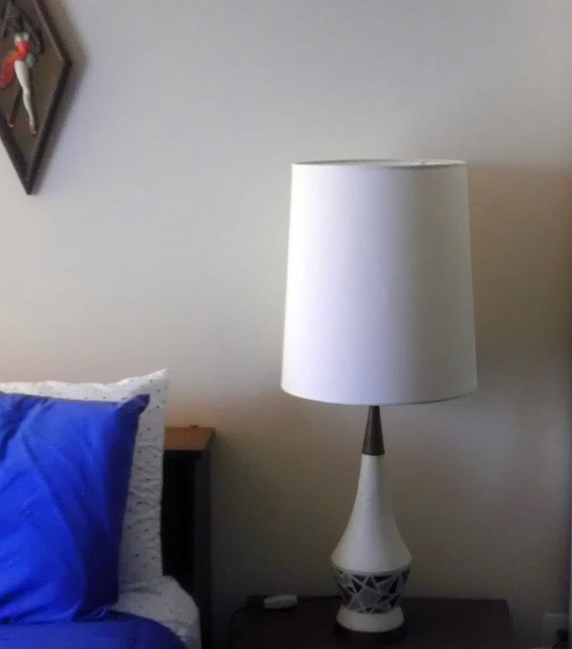 You like?  I like.  I also added inline switches to make turning the lamps on and off easier.  So I think I'm done with lamps for a while.  I hope so, anyway.

That's actually it for thrift finds, but I have a couple of other purchases I want to mention. 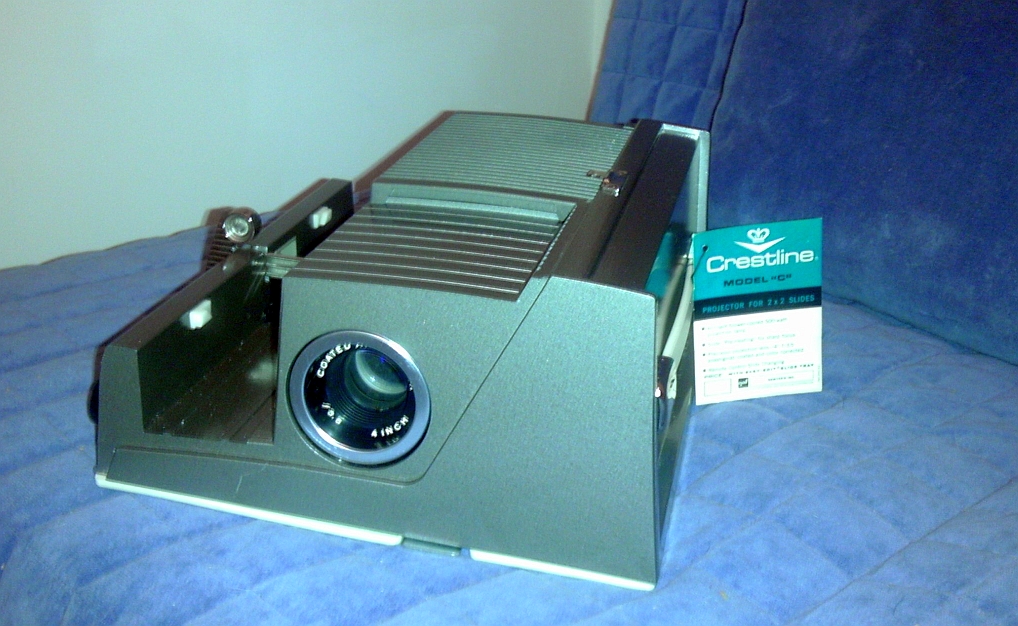 3.  Slide Projector!  This was actually an eBay purchase.  I had been toying with the possibility of buying some of the slides I keep seeing at the thrifts and basically snooping into other peoples' lives.  Unfortunately, I didn't own a slide projector.  So I was reading the 1961 volume of Consumer Reports (don't judge) and saw the Crestline Model C was highly rated.  I really liked the name "Crestline" so I searched for it on ebay, saw this and won it for my bid of $5.00.  It works beautifully, came in its original box with all paperwork (see the hang tag still attached to the handle?), and even had a tray of slides with it.  Okay, they were kind of boring, but it's a start.
Naturally, I found NO slides at the thrifts this week!  I have a movie projector too, but I don't think I've ever seen home movies at the Goodwill. 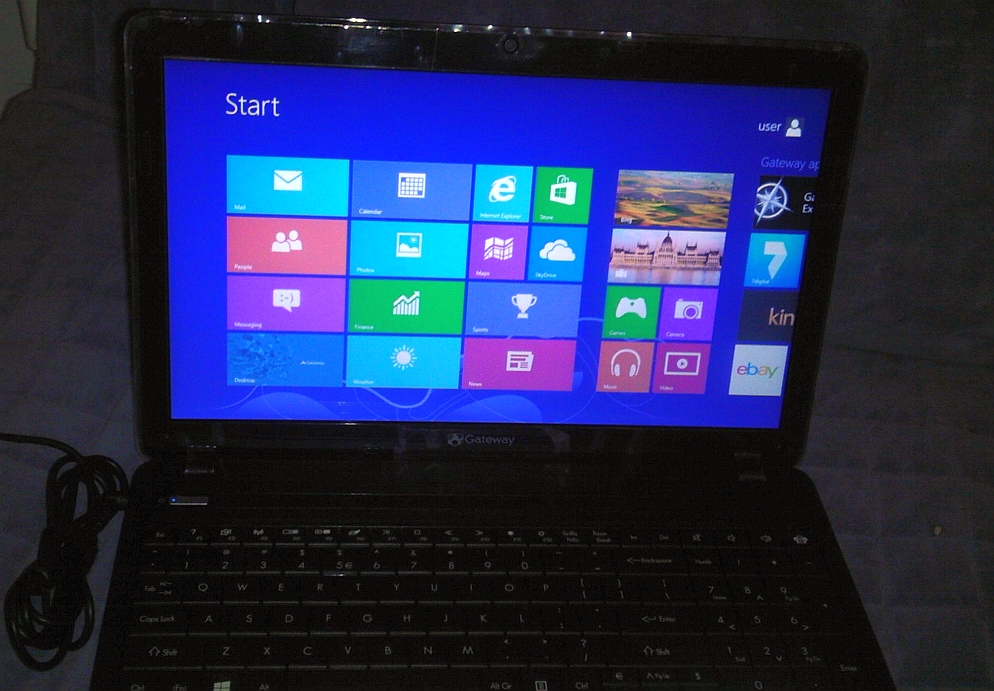 4.  Free laptop!  So here's the story behind this.  A while ago, there was a Class Action Suit against EMachines, the computer company.  Something about the floppy drive; I can't remember the details.  Well, I joined the suit, as I had owned an EMachine that was included.  When it finally got settled, they sent people a voucher for $365.00 worth of stuff from a certain website (tablets, laptops, PCs and monitors, mostly refurbs); you could also convert the voucher to cash--$62.50.  So I saw this Gateway laptop on the site, factory refurbished, decent specs and only $300.00.  When I went to order it, I got the notice that any unspent balance on the voucher was forfeited.  Hmm.  That left $65 bucks for me to do something with.  I couldn't find anything around that price.  Bummer.  So I went ahead with the order and when it asked how I wanted it shipped, I automatically checked the cheapest method.  Then I saw that overnight delivery was $38.00, so I figured Sure, why not? So I got my free laptop the next day!  I've only fired it up to make sure it works.  I already have a laptop and a netbook and don't need another one.  I haven't decided whether to save this in case one of the kids needs a computer or to flip it on ebay.  Thoughts?

P.S.  Still haven't put the Eames coat rack on ebay yet because I can't find a box big enough to ship it in!

Linking up with all the deliciousness at Sir Thrift A Lot and The Nifty Thrifty,