What is it around here?  It's like absolutely nothing good is showing up at the thrifts.  Nothing, at least, that I want to buy.

The Rescue Mission had a really nice selection of Tupperware this week, but nothing in a size or shape that I could actually use.  Goodwill had a coffee table with a drawer (more on that later) that was acceptable in size and style, but it was wobbly.  I found a nice Pyrex fridgie in the big square size, but it was the Early American pattern which I don't want.

Not that the weekend was totally without purchases, you understand.  Just not anything spectacular. I did find a small folding table for my neighbors.  I put it outside their door to put the newspaper on in the morning.  My neighbors are elderly and they have a hard time bending down, so that should make things easier.  And I got Hubs a purple (his favorite color) travel mug to replace the one that the Girl Child made off with when she went back home to New York.

And I got this:

"This yellow Fluffo is such a short shortening..."  LOL I don't even know what that means.

I haven't really looked through it yet, but it's copyright 1956 and published by Procter & Gamble, so I'm confident that it's going to be a good one.  There's a chapter on salads though, and I'm looking forward to seeing how the Registered Home Economists in P&G's sparkling test kitchens incorporate shortening into, say, coleslaw.  This is 1956, remember, so they'll do it.

Okay now, coffee tables.  I've been on the lookout for one that has a drawer for keeping remotes and stuff in.  I really hate having crap on top of the coffee table and so far, we have three remotes (which we hardly ever use) and once I change out the ceiling fan in the den, there will be another one.  Not to mention the folders for our FIOS internet, TV, and phone that require periodic reference.

Naturally, I've been on the lookout for a suitable table at the thrifts but have been coming up with nothing.  So I decided to take a peek at Overstock.com and found this one: 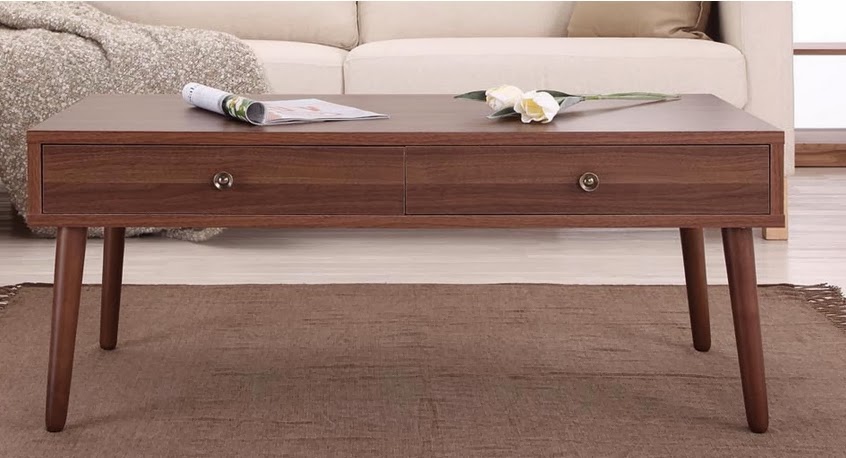 It's certainly the right style and as a bonus, it has two drawers.  Plus, it's reasonably cheap ($104.05) and the right size.

So, asking for your opinions--should I get this or wait to see if I can find something in the thrifts?  Post in the comments or email me--for some reason, people like to email me rather than posting comments.  That's fine, I just don't know why people do that.

Linking up with all the fabulousness at Sir Thrift A Lot, The Nifty Thrifty, and We Call It Junkin though I kind of feel bad about it.