Well.  Did you all have a wonderful Christmas?  We sure did here at Fondue Headquarters.  There were a lot of presents, a lot of food, and a lot of family, which is just the way it's supposed to be, no?

And frankly, your ol' Uncle Veg is pooped.  I'm not going to go on about how Christmas seems to approach with the speed of a freight train, as opposed to when I was young and I thought it would never get here.  I believe that's been covered before.  But let me tell you this--Christmas comes a lot faster than it used to!

Anyway, I have a bit of a Thrift Find to report. Only one, but since Hubs and I are both off this week, we may make a few more stops. 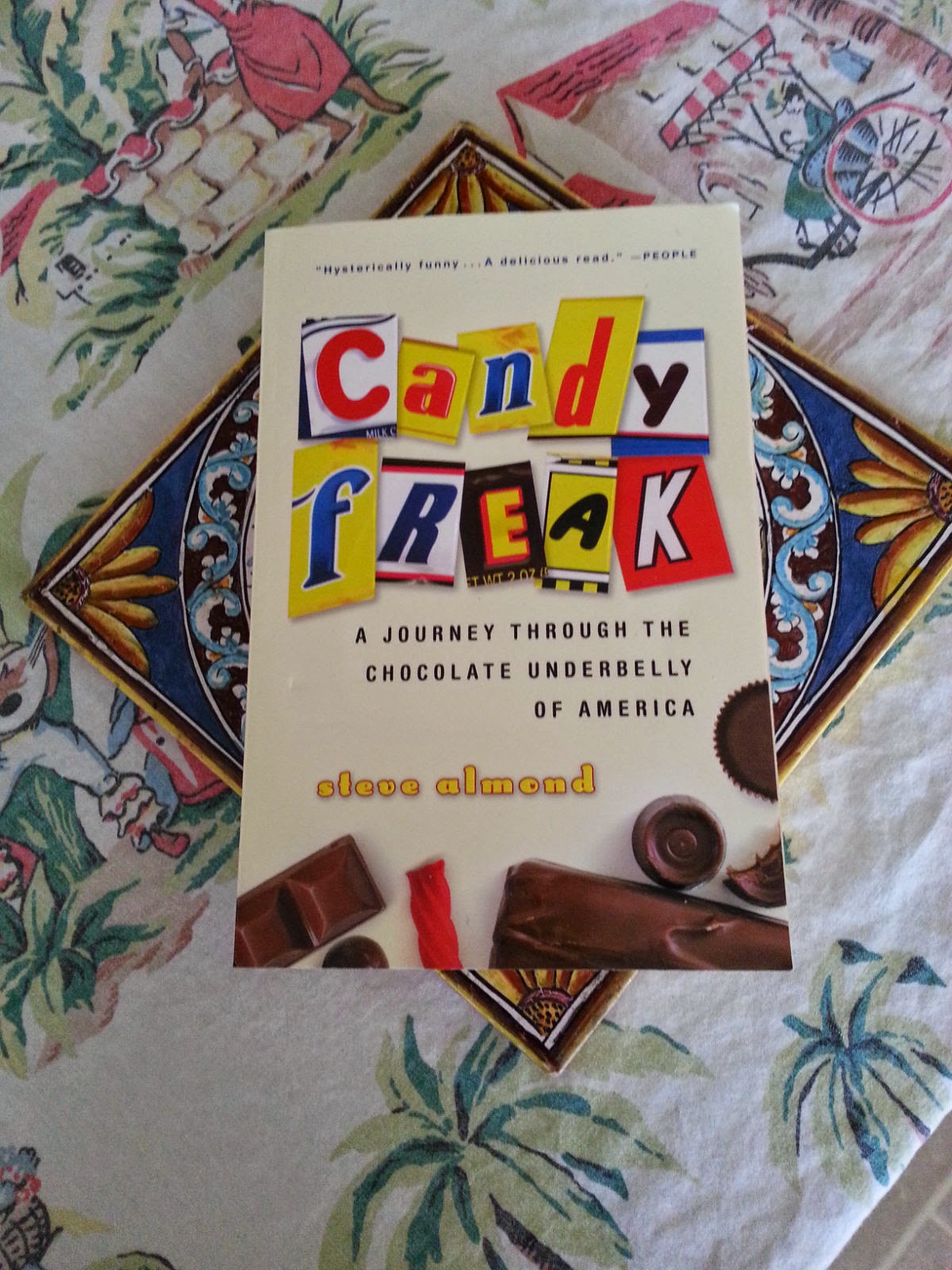 Book!  Not a cookbook this time, but still kind of about food.  It's all about the history behind different candies, mostly regional.  It's a funny and insightful book, and if you don't have a sweet tooth, you will after reading this,  Savers, $3.00

And that's it for the thrifted finds.  We did get a couple of new things at retail, but first let me explain:

After realizing that we only have white trees in the house, Hubs and I had a discussion:  Should we alternate between white and green trees?  Or should white trees be our "thing"?  We decided that white trees would, indeed, be our thing.  So to add to the collection, I got these: 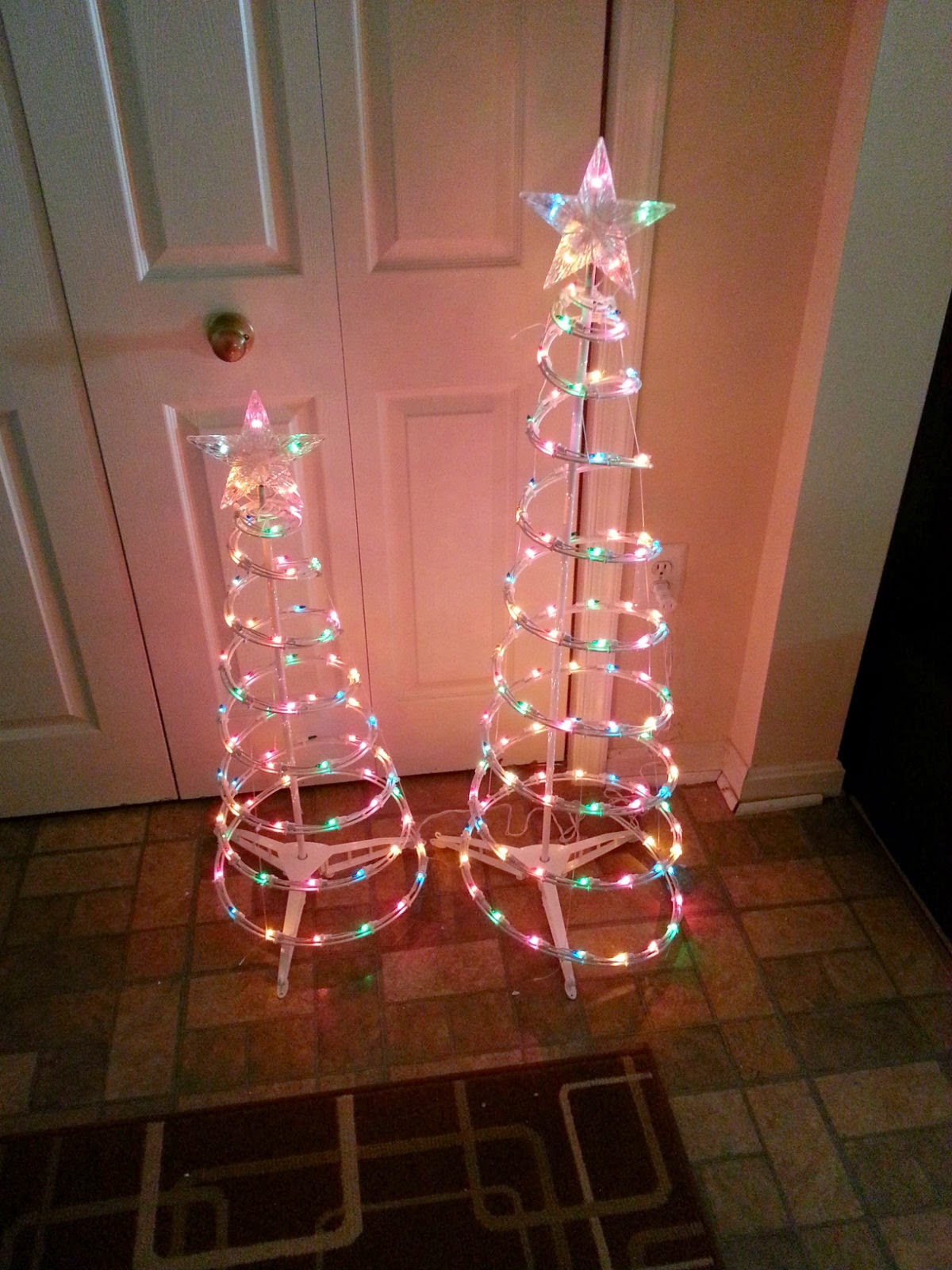 Yeah, they're super garish, but I still love them.  Love them so much, as a matter of fact, that I was willing to pay full price for them on Christmas Eve (they were the last ones left.)  At Walmart, no less.  I mean, come on Walmart--can't you start discounting on the last day of the shopping season?  Geez.

This is one of those pop-up trees that looks very "all the Whos down in Whoville..."  I like that it stores in a minimum of space, since that comes at a premium around here.  Like the trees above, this was the last one in the store (Target), but at least I got it half price.

I want to share one more thing I got.  It wasn't a gift, since I bought it myself, but I have high hopes for it.  Again, let me explain first:  I have a high tolerance for mess.  Unnaturally high, some would say.  But there are two things that send me right over the edge:  dishes in the sink, and Christmas wrapping stuff.

We keep the wrapping stuff in a big Rubbermaid container, but not all of it fits, and there are certain people who have to have every roll of paper, every bow, every roll of ribbon, every box, and every gift bag out.  I looked into getting a gift wrap cart, but they were like over $180!  But then I stumbled across this one at Bed Bath and Beyond: 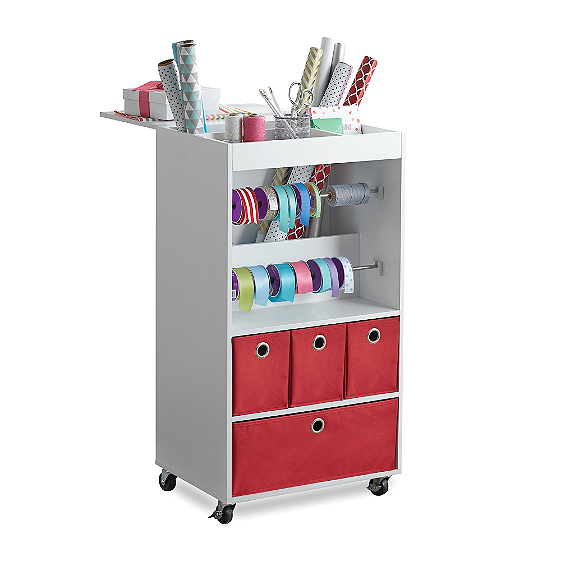 It was only $120, and by signing up for emails or something, I got their usual 20% off, bringing it down to $95, and free shipping.  As I say, I have high hopes for it.  But.  And that's a big "but".  Couple of things make is not so great:  Not all the parts fit well.  I had to do a little "persuading" to get the thing together (which took forever, by the way, and I'm good at assembling things.)  One of the pieces had 4 dowels missing, so I had to wait until the next day when I could go get some replacements.  When I finally had it mostly together, I discovered that one of the casters was missing.  Geez.  On a positive note, the gal I spoke to at BB&B was very friendly and helpful and she promised to get my caster out in 7-10 days.  We'll see if that happens.  Also, I ordered this on Christmas day (Thursday) and it got here on Saturday!

In Other News Department:  Last week's question about whether to buy a used microwave is moot:  it was gone when I went back.  So it looks like I'll get some soulless made-in-China piece of crap at Walmart.

I also decided to mount the new TV on the wall.  It was a pain to do, but I like it much better than just sitting on top of the old set: 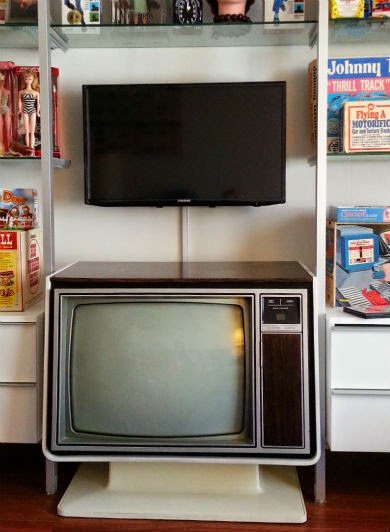 Huh.  It looks kind of wonky in the picture, but not in person.  Tribute to my mad skillz as a photographer, I guess.

We're having The Girl Child and The Boyfriend for dinner tonight, and frankly, I'm nervous about cooking this $50.00 piece of meat.  I got a small beef tenderloin, and it intimidates me;  I have the tendency to turn meat into shoe leather.  Keep your fingers crossed for me, won't you?  Alongside, we're having roasted potatoes, broccoli, and creamed onions.

And so, before I start straightening up for company, let me take this opportunity to wish you health, wealth, and happiness in the New Year!