Annnnnd...it's over.  All the decorations are put away, so it's like Christmas never happened.  Normally, I don't take things down until January 6 (Twelfth Night), but it was just easier to do it this past Saturday.  And I didn't want to do it on Sunday, as that was the last day of Hubs's and my 2-week vacation, and the day was depressing enough!

In good news, the thrifts were a little kinder to me this past week than usual, so I have a couple of things to report on, but first, indulge me a bit as I wax philosophical for a moment.  Or you can skip down a few paragraphs and save yourself from hearing me complain.

It's probably obvious that I love shopping.  I'm sure some of you can identify with that.  In particular, I love Christmas shopping.  "Loved" is probably a better word since

Oh, that's not to say it isn't convenient, because it undeniably is.  I did  the lion's share of my Christmas shopping online this year, and you just can't beat free shipping (the only kind I get.)

Still (and yes, I realize how stupid this is going to sound), it's not as much fun as when I was young.

Growing up in New England, you could pretty much count on there being snow on the ground starting around Thanksgiving.  We'd go downtown to Parke-Snow and R. H. White (our local department stores) and look at the elaborate display windows.  The sales floors were decorated to within an inch of their lives and to a little kid, the sparkle was nothing short of magical.

Then a quick stop at the lunch counter at Woolworth's or Grant's for some hot chocolate, and maybe a little 8-year-old shopping for Mom & Dad (wow, look at the size of that bottle of perfume!  And it's only 98 cents!)

As a rule, we'd make at least one trip to Boston and go to Jordan Marsh to get our pictures taken with Santa.  I don't remember going to Filene's--we were definitely a Jordan Marsh family.

Even when they built the new mall (Searstown), they did a wonderful job of decorating (well, except for that one unfortunate year they tried to change the Christmas colors from red and green to pink and chartreuse.  This was the late '60s, so...)

Now when you go to a mall, there's a Santa in the center court and that's about it.  Sears will throw up a faded red tinsel tree and call it good.  Department stores (meaning Macy's, because that's all that's left) will hang a few signs and that's all the effort they put into decorating.

Am I the only one who misses the Toyland that sprang up in every single store, no matter how improbable?  I'm thinking about the hardware store and the auto supply place.

It all came to a crashing halt, I think, when Woolworth's went out of business.  Once they were gone, the whole season seemed a little less Christmassy.

(And yes, I realize that the whole point of Christmas is a spiritual one, but I'm not addressing that here.  I'm only talking about shopping.  Even I'm not that insensitive!)

There was just something about Woolworth's.  All the cheap & cheerful decorations for sale, the ugly artificial trees, the lunch counter, the smell of the store...  And always, there was at least one canary flying around, an escapee from the cages in the pet department.

How I miss Woolworth's.

So that's my little Diatribe du Jour.  Thanks for sticking it out this far.  Sorry it's not very well written, but I'm trying to do this quickly at work and it's noisy in here with a lot of distractions.

On to the thrift finds! 1.  Little Golden Books!  I haven't looked too closely, but I'm pretty sure these are reprints, not the originals.  That's fine with me.  I only have two, so not a collection yet.  But I'm expecting to get more!  I got the idea to collect them from reading this book.  Goodwill, $1.62 each. 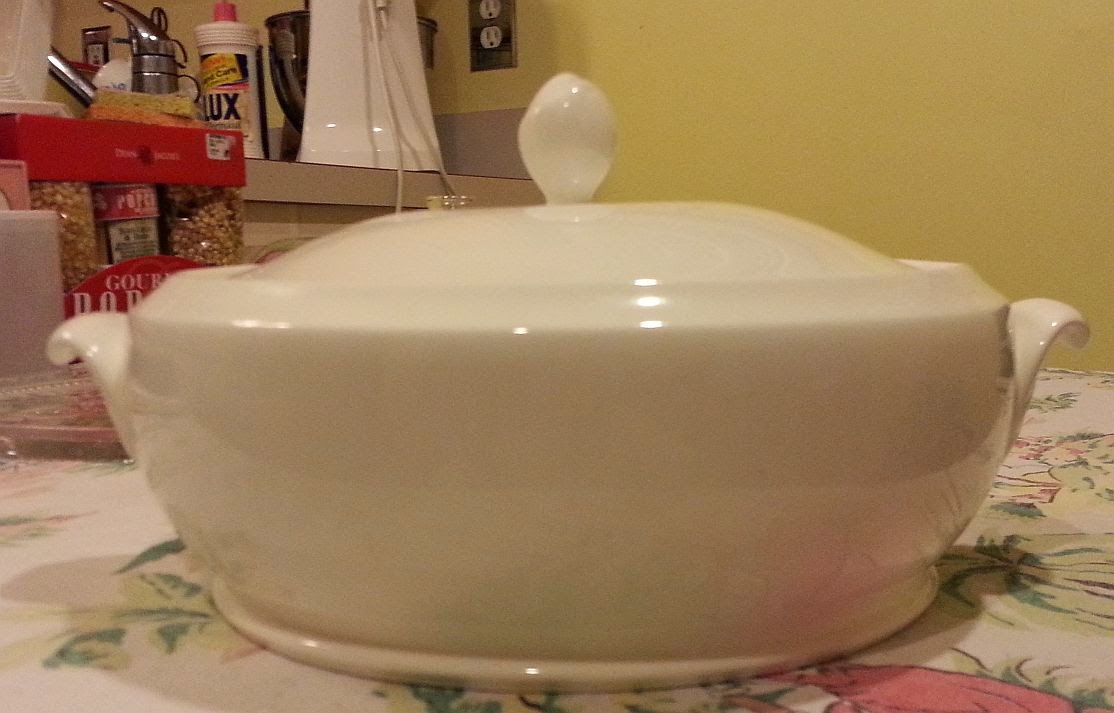 2.  Covered Vegetable Dish!  I really needed this a few days before I got it, but at least I'm set for the next time we have company.  This is completely generic--there's no mark whatsoever on it.  I think it's pretty, though, and plain enough that it will go with whatever china I'm using at the time.  Rescue Mission Thrift, $3.00

3.  Pyrex!  As promised!  This is the shape I love, and the first time I've seen it in the wild.  Does anyone know the pattern name?  The design is in perfect shape, even after pulling off the tape holding the lid on.  Pretty sure it's an 033, 1.5 quart.  Unfortunately, there's some weird stain on the handle:
Anyone know what to do about this?  I tried steel wool figuring that would work, but it had no effect whatsoever.  Then I tried Bar Keepers' Friend, but that did nothing either.  I was afraid to try anything else before asking for help.  Help!  Goodwill, $3.00 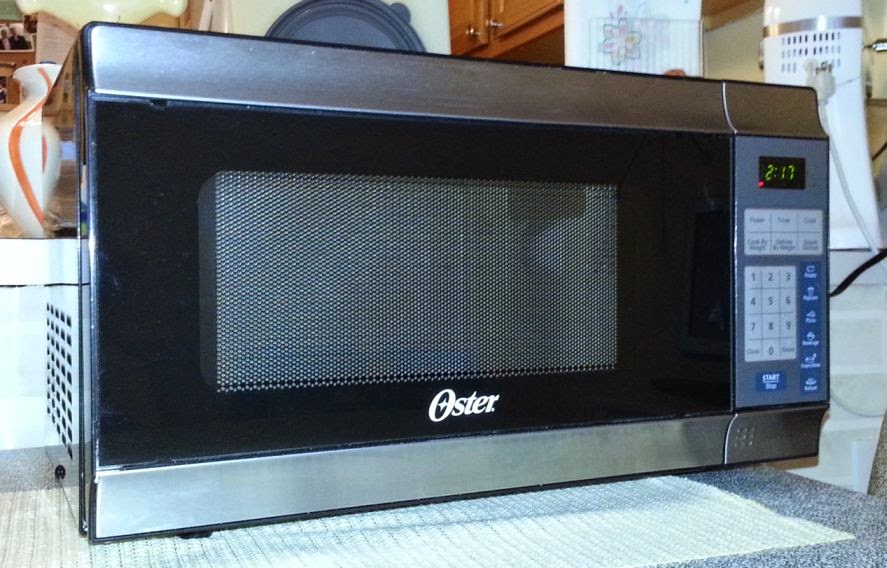 4.  Microwave!  Well, the one I was considering last week got sold, naturally, but I found this one that was reasonably clean and the right size.  One Salvation Army we went to wanted 40 bucks for a similar Sunbeam model that was missing the turntable.  I guess people don't know that without that little glass plate, the microwave is useless.  Anyway, I tried this out in the store by running out to the car and getting Hubs' water bottle, and pouring some into a glass from the shelf.  It cleaned up nicely without too much work, so I'm pleased.  Goodwill, $20.00.

I also bought a battery-operated pencil sharpener, but it turned out not to work, so I'm not posting a pic.  It was only a buck, so no biggie.

In Other News Department:  I got tired of waiting for the caster to arrive for the gift wrap cart I got last week, so I picked one up at Home Depot.  I haven't had the opportunity to use it yet, since I got it after Christmas, but I can tell you that it holds a crap ton of stuff!  That corner of the closet looks so much better now.  I consider it money well spent.

And that's it for this week, kiddies.  Sorry this is so disjointed--I'm trying to do too many things at once and I'm really not good at multitasking.