I know it's been a long time, kiddies, but really, your old Uncle Veg has been having the most dismal luck at the thrifts.  Week after week, Hubs and I hit the stores and come home empty handed.  It's been really discouraging.

But all that changed yesterday.  Not only did I find something, I found two somethings.  Maybe three, depending on how you do the math!

So let's not waste any time.  Here we go! 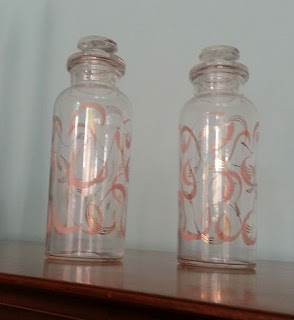 Pink Swirly Apothecary Jars!  It's kind of hard to see (because I'm a terrible photographer) but these two jars have pink and gold swirls on them.  I'm pretty sure I've seen them in other people's vintage blogs, but I never thought I'd find one, much less two of them.  I need to fill them with something, and I'm thinking bubble bath, since that's what probably came in them originally.  What do you guys think?  One's going in the powder room which is already pink, so I should probably put blue bubble bath in that one.  Haven't decided whether hubs or I get the other one.
Goodwill, $2.00 each.  Yeah, kind of pricey, but worth it. 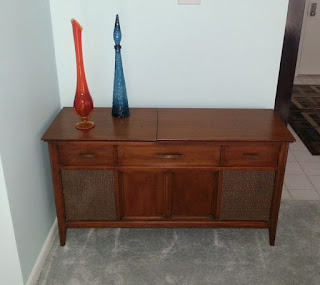 Fabulous Mid-Century Stereo!  I originally saw this three weeks ago and tried to convince myself to forget about it.  Then  two weeks ago, I thought What the heck? and went back and poked at it a little (there was stuff on it and around it.)  I noticed that the cloth on one of the speakers was pushed in, so I told myself that's that, I don't want it in my living room if it's not perfect.  Then Saturday morning, as Hubs and I left the house, I said "I don't think I'm quite finished with that stereo..."  So we went and measured it.  If it was too big, I'd have to give up on it.  Nope, just the right size.  Then I asked if it worked.  They said it hadn't been tested, so they plugged it in while I went to find a record.  We fired it up and it played.  Beautifully.  I was flabbergasted.  Of course, the changer needs cleaning and greasing and it needs a new needle, but I couldn't have been more pleased.  It sounds really good, too.  Oh, it's a Truetone (Western Auto) from 1966.  I found it in my 1966 Western Auto catalog.  It's next to the top of the line.
When I asked how much, the guy said 40 bucks, which I thought was extremely reasonable, particularly because it worked.  So I forked over the cash and two guys put it in the back of my car for me. Needless to say, I'm tickled.  Rescue Mission Thrift, $40.00