Well, butter my butt and call me a biscuit.

Here I am again for the second week in a row with some actual thrift finds to report.  When was the last time that happened?  'Bout a million years ago, I guess.

Anyway, Hubs and I started out the weekend by going to an estate sale.  It was already in day 3 of a four-day run, but it's so rare that there's a sale close by, not to mention one that's operating while we're out and about, that we went anyway.  Judging from the pictures I saw online, there wasn't much I was interested in, but you never know.

Hubs and I loved the house.  I'd guess it was about 1960-ish (Edit:  Built in 1962.)  We lost track of the number of bedrooms and bathrooms, and neither one of us could make heads or tails of the floorplan.  It seemed kind of like a maze.  It looks like the owners did a good job of decorating it when it was new but unfortunately, they just didn't keep it up.  Everything needed replacing, which is a shame, because whoever buys the house is just going to rip everything out and destroy all the mid-century goodness with granite countertops and stainless steel appliances.  Oh, well.

On to the finds! 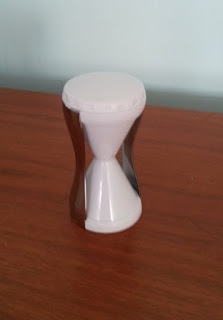 Vegetti!  I'd been meaning to try this, but in the stores, it's like 15 bucks.  I didn't want to spend that much on something I might end up using once, so I was pleased to find this for a buck at the Goodwill. Even more pleased when I found out it was half price!  Goodwill, $0.50

Tissue Box and Guest Towel Holder!  These came from the above-mentioned estate sale.  Hubs and I weren't pleased with the tissue box we have in the powder room and this metal one was a nice upgrade.  And when we have guests, they can use the guest towels I will provide, just as soon as I buy some!  Now get this: the tissue box had the original price sticker inside--32 bucks!  Is that outrageous?  Maybe it was for the set, but still, that seems a lot of money for these.  I'm guessing they're late '60s, early '70s.  Estate sale, $3.00 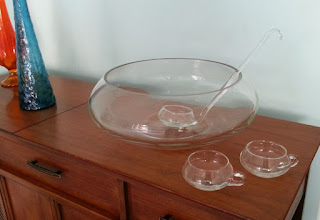 Super Cool Punch Bowl!  I passed on one of these at Savers last year and have regretted it since.  So you can imagine my pleasure when I saw this at the Goodwill.  There are a couple of chips in the punch bowl, but who cares, you know?  It has all 12 cups and the ladle, and it came in the original box: 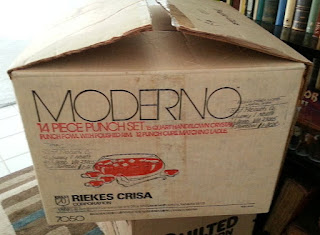 So as you can see, it's a Moderno.  Whatever it's called, I love it!  Now that we're in the new house, Hubs and I were thinking about having an Open House next month, and now that we have this punch bowl, I guess we're going to have to go through with it!  I don't want this baby to go to waste.  My original plan was to get a crappy punch bowl set from the Goodwill and then give it back after the party (like I did last time), but this one's a keeper.