Thrifting Finds #78: Not So Thrifty!

Got that song in your head now?*  YOU'RE WELCOME.

So Hi, Kids!  I just checked and it's been a while since your ol' Uncle Veg posted anything here.  Want to know why that is?  Two reasons:  we missed our usual rounds a couple of times, and when we did manage to get out, the thrifts had NOTHING.  I figured they'd be overflowing with stuff since everyone unloads their stuff at the end of the year for the tax write-off, but nope.  Maybe they're sending it all off somewhere else. I don't know.  All I know is that the pickin's have been slim.

I did find one thing, though.  It's not particularly exciting, but here 'tis: 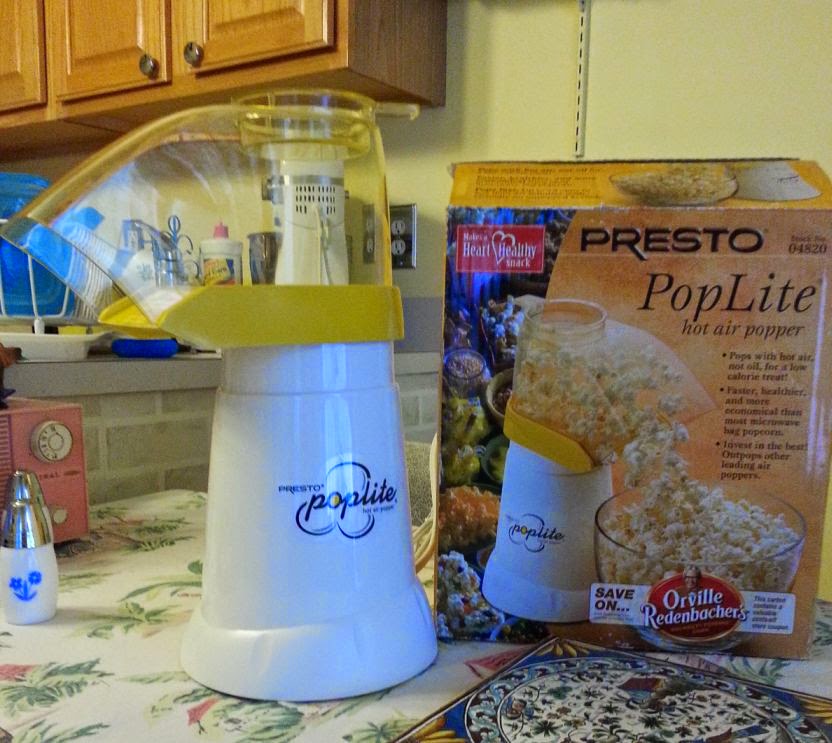 1.  Popcorn Popper!  For a while there, I had a terrible craving for popcorn.  I have no idea where that came from.  The real kind is too messy to clean up after and the microwave kind tastes really chemically to me, so I thought I'd go back to air-popped.  P.S. It still tastes like Styrofoam.  Anyway, the Goodwill had two of these: One without the all-important measuring cup/cap, no box, no instructions for 6 bucks, and this one, with all the pieces the other one didn't have (not to mention a little bit of ooky stuff on the bottom of the other one), also six bucks.  I guess it's obvious which one I bought.  I don't think this had ever been used, as the wire tie was still around the cord.  Goodwill, $6.00

And that's it for thrift store purchases.  I'm kind of embarrassed to even show you that, since it's not even cool or vintage.

I did buy one thing this weekend, though not at a thrift store.  And a little more expensive than I'm usually willing to spring for: 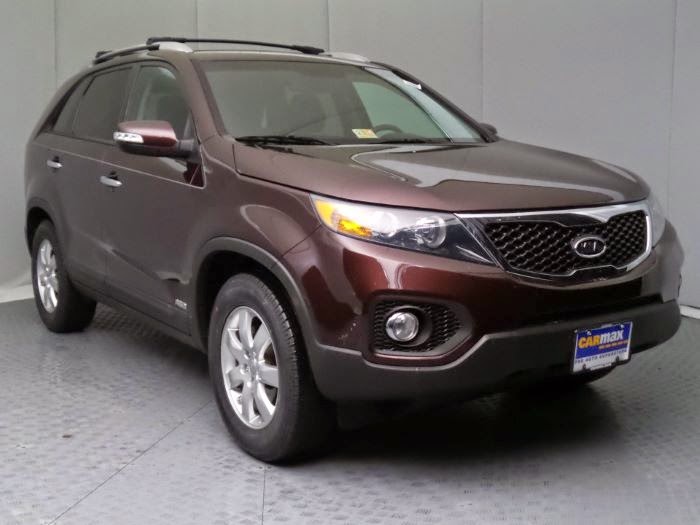 Kia Sorento!  Meet Oobie.  So yeah, I really wanted to go back to having 4-wheel drive (I used to have a Kia Sportage) and I so I got it into my head, and look what I went and done.  It has all kinds of fancy features I'm not used to--backup camera, downhill brake assist (huh?), Sirius XM radio, and on and on.  And the best feature of all:  butt seat warmers!  Talk about delightful!  Where have you been all my life?
If the Average MPG thing in the dashboard can be trusted, I'm getting the same mileage I got with my old car (Kia Rondo.  Seeing a theme here?  Hubs has a Kia Forte), but I won't be sure until after a couple of fill ups.  It's a 2012 model, by the way, and I got it at Carmax, and overall, it was a decent experience.  Word of warning, though:  when they say "no haggle", they mean it!
Picture is from the Carmax site--the weather here has been too awful to take a good picture of it.

Stuff I Didn't Buy Department
Hubs and I saw a couple of things yesterday that needed to be reported on.  Scroll down if you dare! 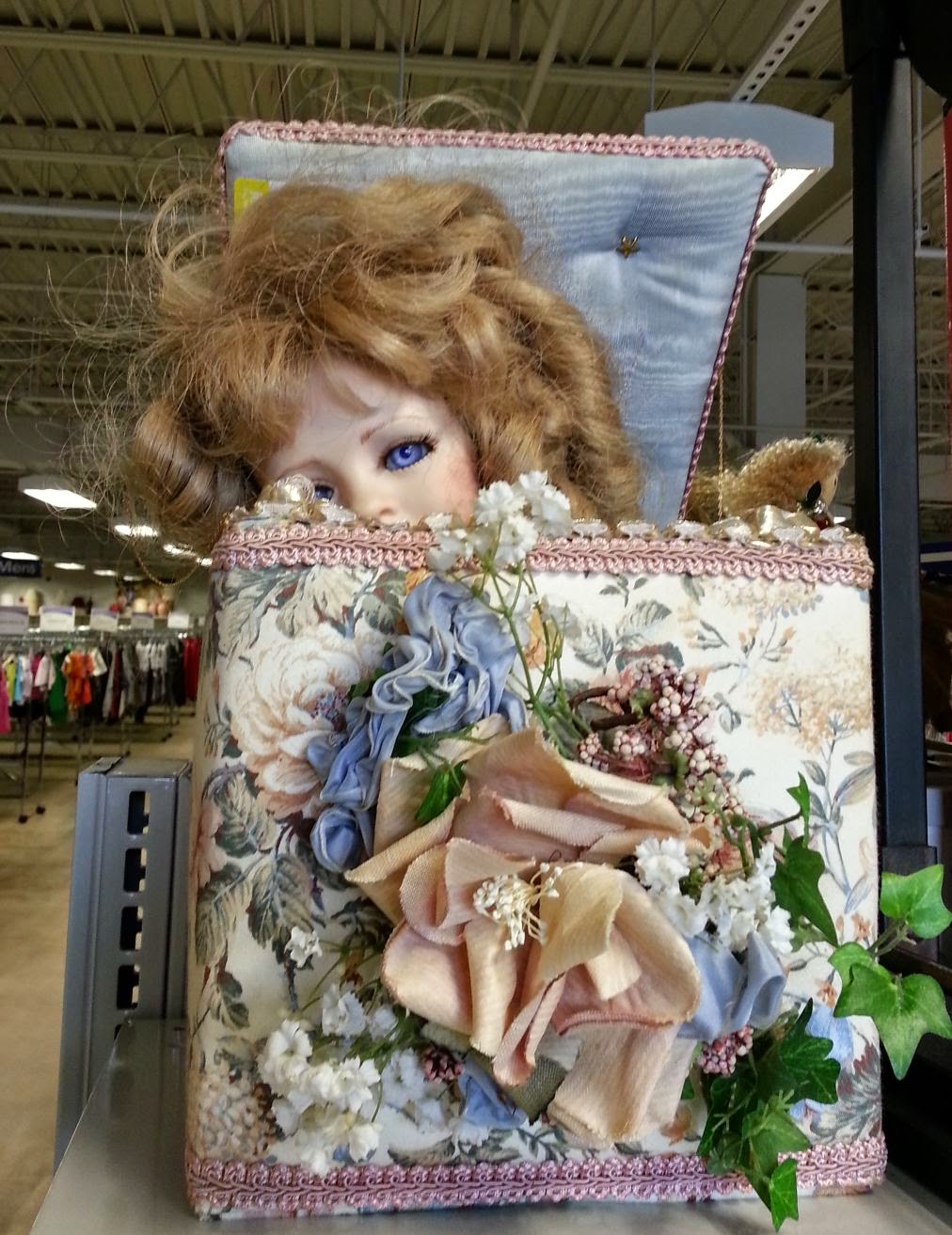 World's Creepiest Jack-in-the-Box!  I actually gasped and did a double-take when I rounded the corner and saw this peeking at me.  Who would want this in their house?  And is it me, or do the eyes look kinda squinty and evil?  Shudder.

WHAT IS THIS I DON'T EVEN  Words fail me.  Hubs spotted it first, and I could tell from the expression on his face that he found something...interesting.  I kept the picture kind of big so you could experience the full horror of it.  Who thought this was a good idea?

I should totally buy this and give it to someone as a gift.

Tragedy Strikes Department:
Way back at the beginning of this blog, I had some electrical boxes installed for ceiling fans.

Wellsir, I went to use the light the other day, and nothing.  Fan didn't work either.  I checked the other one in the room with both remotes, and that one's fine.  Dang.  So now I have to figure out what's wrong with this one.  I'm hoping it's something simple, 'cause it's going to be a royal pain to take it down.  It has one of those useless Lifetime Warranties--if something goes wrong, they'll send you a new part or something, but not until you uninstall it, dismantle it, and ship the whole kit 'n caboodle off to Sri Lanka or someplace.  Imagine how little I want to do that.

And that's it for this week.  Lame, I know, but at least it's something.  With any luck, we'll get to make our usual rounds next week and hopefully find something neat.  Linking up this week with  Sir Thrift A Lot, Hey What's For Dinner Mom?, and Vintage Bliss Tuesdays

EDIT:  For the youngsters out there.