Hubs had a work thing he had to do on Saturday and I went along with him.  This meant that we couldn't hit two of our usual Saturday stops (and the third yielded nothing at all.)  We planned errands, etc. for the rest of Saturday so that we could make our usual rounds on Sunday.

Well.  We pulled into the parking lot of Sunday Goodwill #1 and noted that it was not nearly as crowded as usual.  Turns out they were closed for their annual employee picnic.

Dang.  Once we were reminded of this fact, we remembered seeing the sign in the store last week.  Both hubs and I thought this was the only store we saw the sign in, so we headed to Sunday Goodwill #2.  Nope, they were closed, too.  Thwarted!

Luckily, the new Savers was close by so we popped in there and I made a single purchase.  We decided against trying Sunday Goodwill #3, as we were pretty sure they were going to be closed as well.

We did head out to The Goodwill Where We Don't Usually Get Anything because we had stuff to do out that way anyway, and hubs and I each picked up a couple of items.  I don't know why they weren't closed.  Maybe the employee picnic was regional?  Dunno.

Anyway, here's what I got:

1. Fire King!  I'm not much of a Fire King person, but I do like the Candleglow pattern and had been planning on picking up a couple of pieces (round cake pans and custard cups, maybe.)  I was so disappointed that we weren't going to make our usual rounds that I kind of grabbed this casserole in desperation.  It's filthy (even after a trip through the dishwasher) and the pattern is a little faded, but I still like it.  This was from the Savers we went to.  $2.99 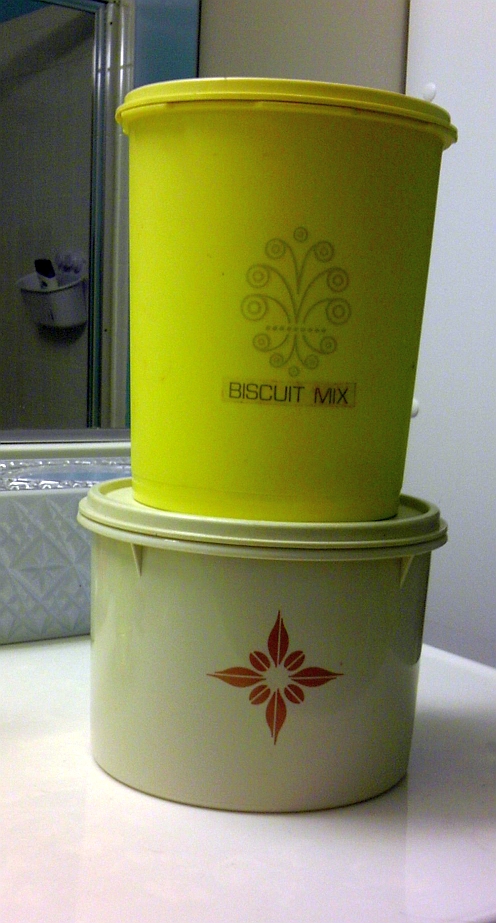 2.  Tupperware!  Yeah, I didn't think I was going to find any at all this week.  I needed something to keep rice in (other than the pickle jar I had been using) so these two canisters looked like they would fill the bill.  I got both because I wasn't sure which would fit in my cabinet better.  The top one has a label on it.  Does anyone know if these canisters came with pre-printed labels?  Or was this something added after the fact?  Goodwill $1.28 (huh??) each.

Oh, and note to the couple in front of me in line:  When you are buying two full carts of stuff at the Goodwill and part of that stuff is half-used bottles of nail polish, you are buying too much shit.  Take it down a notch.

Hopefully, next week will be better; we seem to be in the middle of a slow period here.  A couple of the Goodwills we go to look like they just cleared out all their stuff and restocked with about 1/3 of what they usually have.

Linking up with Sir Thrift A Lot, The Nifty Thrifty, Apron Thrift Girl and The Remnant
Posted by veg-o-matic at 1:57 PM