In order by height... 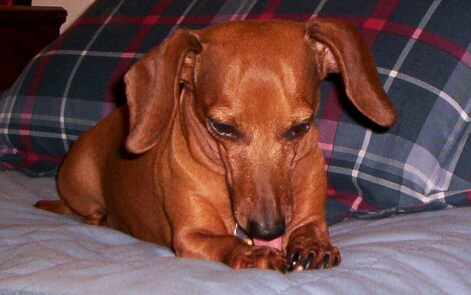 Official taste-tester and resident snuggle muffin, Honey is the shortest and youngest member of the Fondue family. This is kind of an old picture of her--she's much greyer in the muzzle now.

Honey came to me 10 years ago, courtesy of Coast-to-Coast Dachshund Rescue.  She is currently 13 14 years old and in many ways still a puppy.

In the last year or so, she has developed both pancreatitis and Cushing's disease. The former is treated with diet (the world's most expensive prescription dogfood), the latter with a twice-daily dose of Trilostane. 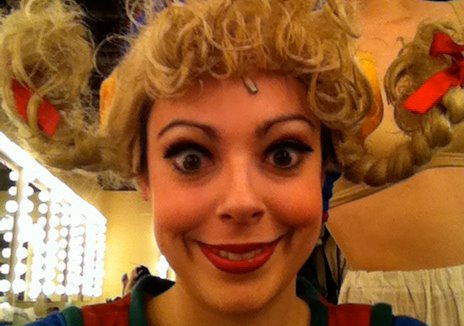 I should probably explain that this picture was taken while she was on tour with Spamalot. Normally, she's a brunette.
Currently living in New York trying to become a star on Broadway, The Girl Child was my "gift with purchase" when I married her daddy.  She is expensive, as girls tend to be, and I couldn't love her more if she were my own flesh and blood.
Singing, dancing, acting--she does it all.  I just wish her employment were a little more steady.  I certainly couldn't live like that, but for actors, it seems to be the norm.

...and that's as close as you're going to get to a real picture of me.  Trust me, I look just like that.
I'm an old codger with a goofy sense of humor and definite leanings towards being nine years old.  I collect stuff--Corningware.  Vintage countertop appliances.  Old toys.  Vintage haircare products.  Christmas catalogs.  Other catalogs.  Old magazines.  Check back next week and I'll have something else to add to the list.
I do IT for a public library system.  Yawn.
I'm far more interesting on the Internets than I am in Real Life.
Contact me at vegomaticbob at gmail dot com.

Not adding a picture at all because I'm not sure how he'd feel about it.  I could ask him, but I'm lazy.
Six foot two with blond hair and blue eyes, Mr. Handsome Hubby is the office manager for a large, metropolitan legal services bureau.  Also a retired actor, which is where The Girl Child gets her talent.
Hubster and I have been together for 6 years now, and until a couple of weeks ago, he never collected anything.
I know, right?
Recently, he has decided to start collecting clear glass barware for display in his office (because his job is driving him to drink, don'tcha know.)   I get such a kick out of watching him look over the stuff in the thrifts instead of just watching me, wondering what I'm going to pick up next.