Well, we didn't pick up a whole lot this weekend, but what we got was choice.  On Friday night I asked hubby if he wanted to go thrifting this weekend and his reply was "Of course.  I think I'm having withdrawal!"  This after only one weekend off!  He ended up getting a bunch more glass things on Sunday.

We also tried a new-to-us thrift store called The White Rabbit.  It's run by a hospital auxiliary.  It was nice, but much too frou-frou for us.  It was like one of those thrift stores that's run by the Junior League--very chichi stuff with price tags to match.  The whole second floor (it's in an old house) was clothes, something in which we have zero interest.

I really liked the house it was in, though!  As we walked through, I was mentally arranging the furniture.

So.  On to what we bought.  It was a weekend of coincidences.  I mean, what are the chances--two weeks ago I found a pair of lamps that need shades.  This week I find a pair of shades that need lamps! 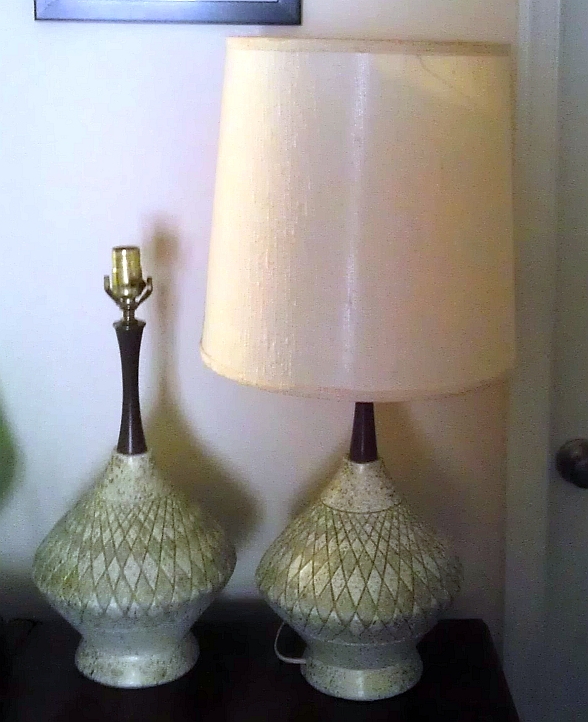 1,  Lampshades!  These were unmarked at the Goodwill, so I didn't know what to expect.  I know some places have a rule that if there's no price they can't sell it.  Luckily, the gal at the checkout said "These are usually 3 dollars each" which sounded like a good deal to me!  I like these shades because they're more off-white than pure white.  I tried a pure white shade on one of the lamps and it looked funny.  I don't know why these lamps look kind of greenish; they're really white with beige and gold.  As another coincidence (maybe), I saw similar shades at Lowe's this weekend for 15 bucks a pop which I thought seemed reasonable.  I like the price I paid better!  Still need to get some new harps for the lamps--the nine-incher is a little too short.  I think 11" would work much better.
Hubs and I also decided that these are going to take up too much real estate on our night stands, so they're headed for the den instead.  $3.00 each. 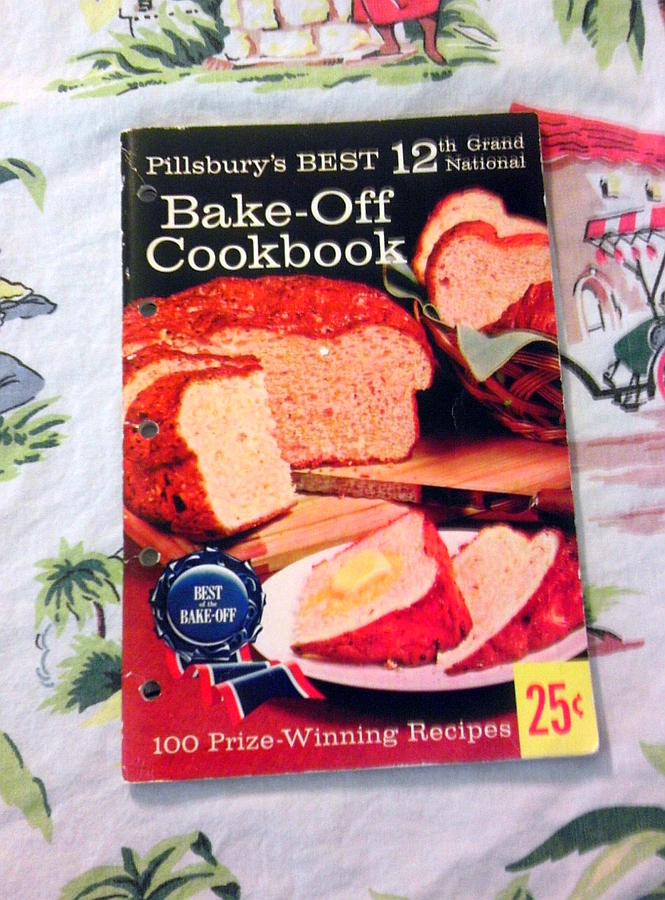 2.  Cookbook!  This is my second Bake-Off cookbook.  There's no date on it but I did a little research and it's from 1960 (a very good year!)  Grand prize winner was Dilly Casserole Bread.  It looks okay, but  a grand prize winner?  Really?  I love the mini-bios they attach to the big winners.  One gal's hobbies include singing in her church choir and dressing bride dolls.  Wouldn't you like to know somebody like that?

The other coincidence of the day was when hubby and I were headed into GW #2.  I remarked that I was looking for a coffee table with a drawer so we have a place to keep various remote controls and whatnot.  Well, damned if we didn't come across one the minute we walked in!  It was almost an exact duplicate of the coffee table we have now (also from the GW), but with that drawer.  Unfortunately, there was a funky spot on the top where I would see it all the time and I think it would have driven my crazy.  Apparently, those Mersman "Party-Proof" tables weren't quite as party-proof as they would like you to believe.  If it were half-price furniture day I would have bought it, but I just didn't feel like spending 20 bucks on a table that would have annoyed me.

In the world of retail (ugh), we also bought new tires for our hand truck.  Do we know how to live, or what?

Linking up with the healthy goodness at Sir Thrift A Lot, The Nifty Thrifty, The Thrifty Groove, and Remnant