So who found some Pyrex this weekend?

Not that I found a whole lot, mind you.  Hubs and I went to 5 Goodwills, a Savers, and the Rescue Mission thrift this weekend and I only picked up one item.  As I say, I'm okay with that due to my hoarding tendencies. Hubs on the other hand, cleaned up.  He found a whole bunch of his beloved colored glass (though there was an unfortunate incident with a red decanter that turned out to just be painted or something, as the color came off when he washed it...)

I almost didn't get my single item, as there was a woman handling it when I noticed it.  I said nothing out loud, but in my head I was saying PutitdownPutitdownPutitdown.  And when she did, I swooped in and scooped it up.  Sort of a swoop 'n scoop, if you will.  It was in a stack with a horribly dishwashered pink 403 and another dishwashwered yellow 403 (neither of which I bought.)

So what did I get? 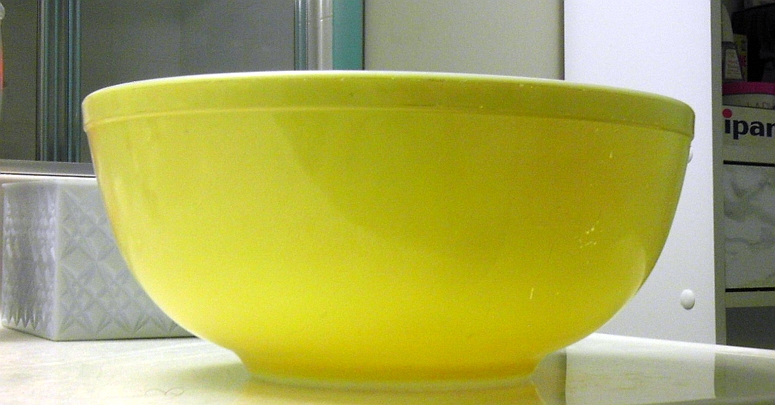 Pyrex!  I am now halfway to my set of Primaries!  I'm pretty sure this is the 404, even though it's unmarked.  It's about 10.25" in diameter--can anyone confirm that that's the size of a 404?  And because it's unmarked, does that make it older?    I have the red 402 that I got a month or so ago, but I didn't take a picture of it.  This bowl isn't perfect--there are some chips in the paint and it was pretty badly untensiled when I got it (though some BKF took care of the utensil marks nicely.)  Still, that's fine with me because I intend to use this bowl.  I don't have the space to collect stuff that's "just for show".  If I can't use it, I don't buy it.  And if it were perfect, I wouldn't use it.  So win-win.  And the best part?  It was only $3.00!

In other news, I got the second ceiling fan installed in the bedroom this weekend.  I know everyone was on pins and needles waiting for that news ;)

Linking up with Sir Thrift A Lot, The Nifty Thrifty and Remnant
Posted by veg-o-matic at 12:11 PM