I think we covered all of our usual spots but one this weekend.  I kept stumbling across things that were almost something I wanted but not quite--a lamp I would have bought if it had a mate, a coffee table that was the right size but the wrong style,  nice Pyrex in patterns I don't collect--that sort of thing.  I'm sure that happens to youall too, right?

I almost started having "Empty Hand Syndrome", when I spied this.  It was in a bin of stuff ready to be shelved, and a bunch of people passed it by.  It's like it was waiting for me. 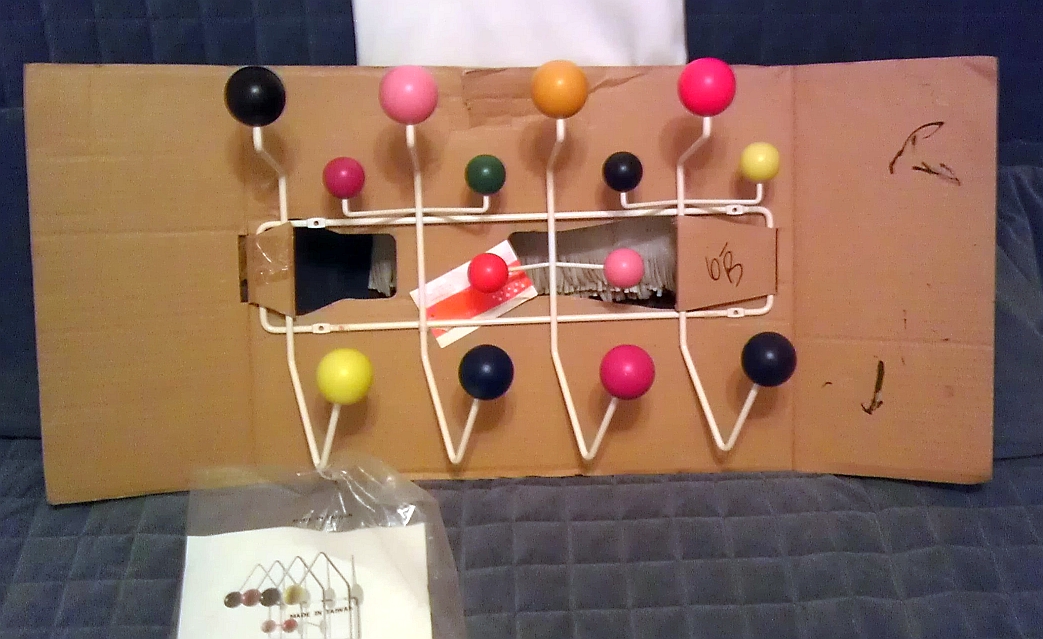 1.  Eames coat rack!!  When I first spied this, I thought "Huh.  That looks like one of those Eames coat racks."  So I sauntered on over and discovered I was right!  It's the genuine article, made by Herman Miller and still has the mounting screws and the instructions/certificate of authenticity attached!  There are scratches on a couple of the balls from being manhandled by Goodwill staff, but nothing major.
Unfortunately, cool as this is, and as much as I love it, I have no use for this and don't even have a good place to put it.
Well.  I couldn't let it languish in the Goodwill, could I?  Or worse, let it get purchased by someone who has no idea what it is.  So I up and bought it.  It's headed for ebay, hopefully to someone who will appreciate it.  They seem to go for 100 bucks or more, which would be great.
Wanna know how much I paid for it?  Are you sitting down?
Six dollars.
I know!
I'll have to get off my butt and take some pictures and come up with a description, but with any luck, this'll be posted this week.  Keep your fingers crossed that it sells for millions of dollars, won't you?

Linking up with the goodness at Sir Thrift A Lot.