Now that I think about it, this was probably the first weekend we didn't have any snow all year.

So I'm starting to think that maybe this whole thrifting business is cyclical.  Despite visiting our usual 6 thrifts this weekend, neither Hubs nor I found anything worth buying.  I didn't even give in to Empty Hand Syndrome, as I have done so often in the past.

I notice that a lot of people on other blogs I read have said the same thing, that the thrifts have had slim pickin's lately.

So we'll give it a couple of weeks and it'll pick up again, right?

You may have noticed how I've been whining reporting that pricing at the various Goodwills lately has been nothing short of insane.  I was pleased to have my opinion confirmed by another customer yesterday.  She walked up to her husband holding a large white-on-pink Butterprint Cinderella bowl and indicated her displeasure with the price thereon.

Or, as she succinctly put it, "This is bullshit."

I believe the bowl in question was marked $12.00.  It was in good, not perfect condition.  I know that pattern is popular, but I don't collect it so I don't know what the going rate for it is.  Does the price seem out of line?

Well actually, no matter what the going rate is, I think the GW is out of line. I mean, it's a bowl for heaven's sake.  And a used one at that.  Isn't the point of the GW to actually move the merchandise? They seem to be thinking they're an antique mall lately.

Okay, enough of that little rant!

Now then.  Even though we didn't get anything at the thrifts, we didn't come home empty handed.  We got these: 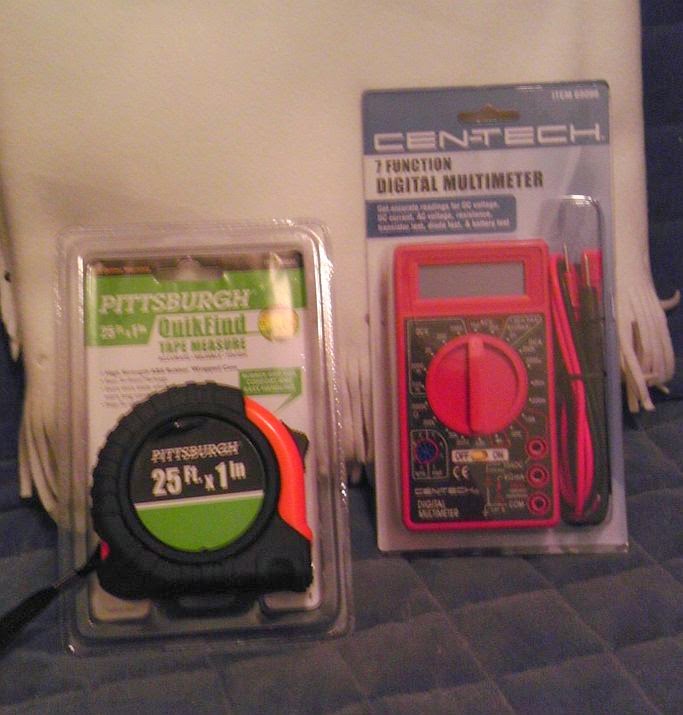 Freebies!  Have you guys discovered Harbor Freight Tools?  It's a chain of stores that sells basically cheap tools.  They're not Black & Decker or Snap-On quality--not by a long shot-- but often they're good enough fer what they're fer, if you know what I mean. It's where I got my rechargeable drill (which works just fine, thank you.)  Anyway, they have a lot of really good sales and almost always have coupons for free stuff--no purchase required.  So I got this tape measure and the multimeter, both for work.  I highly suggest signing up for their emails. Over the course of a year, you can pick up a whole lot of good stocking stuffers.

I've been on quite a belt-tightening tear lately.  I'm not really sure why, other than the fact that I'm basically a cheapskate.  So here's where I'm going to start cutting back:

A:  The Newspaper.  We get the daily paper, at a cost of about  $218.00 a year.  A couple of weeks ago, Groupon had a deal to get the Wednesday and Sunday papers only, for 10 bucks.  A year.  Now, I really only get the paper for the funnies and the Sunday sale ads, so the ten-dollar deal seemed like a no-brainer.  Of course, this is the Baltimore Sun we're talking about, where intelligence and/or logic do not exist.  My current subscription runs out on April 28th.  One would think that they'd wait until that was over to start the new deal.  Not so.  So now I'm getting double papers on Sunday (and presumably Wednesday as well.)  Because that makes sense.

B.  FIOS TV.  When we signed up for FIOS last year, I had them add the most basic TV package, which is basically the 3 or 4 networks plus a bunch of Spanish stations.  That added 10 bucks a month to the bill, which I didn't think was bad.  Unfortunately, we also need to rent a little decoder box, and that runs another 6 bucks a month.  Now, we really don't watch much TV (other than DVDs), but it wasn't until I really started paying attention that I discovered we don't watch TV at all.  Well, hardly.  Hubs watched the Tonys or the Oscars or something.  And there was a good six-month period where, even if we wanted to watch TV we couldn't, as neither Hubs nor I knew where the remote was.

So the TV service is going, if I can cancel it without screwing up the rest of my plan, which I think I can do.  I think, though, that when I cancel the TV I'm going to up the Internet service speed for that same 10 bucks a month, if it can be done.  At the very least, I'll save $6.00 a month on the little converter box.

Oh, and by the way, we get the same channels with an antenna, plus a whole lot more.

C:  Cell phone.  Currently, I pay $37.00/month including taxes to Virgin Mobile for my service.  This buys me unlimited text and data, and 300 talk minutes a month.  All in all, a very good deal.  I've been with VM for years and years and the service is just fine.  Turns out though, that I don't use my phone nearly as much as I thought I would.  For instance, last month (which was typical, I think), I only used 130mb of data and 35 minutes of talk.  I forget how many texts I sent, but I'd be surprised if it was more than 10.
Enter FreedomPop.  Has anyone tried this service?  I first discovered it when I saw a deal for a phone on One Sale.  I looked into it and kind of impetuously ordered the phone for $99.  Unfortunately, it turns out that the particular phone won't run a couple of apps I need for work, so I'll have to send it back.  But I ordered a different one right from FreedomPop that should work just fine.
Now here's the deal on their service.  They have several different levels, but the one that seemed the best fit for me is 200 talk minutes, 500 texts, and 500mb of data per month.
The price:  Free.
There are some downsides, though.  For instance, voicemail is not included.  I decided to spring the $2.49/month for that service.  Even though I don't often get voicemails, I wouldn't want to be without the service.  Also, you can't send picture texts (MMS) at this time, though they say they're working on it.  Youall probably know that most of the texts I send are pictures of weird stuff from the Goodwill.  Not a deal breaker, particularly if it may change in the future. Kind of a biggie is that you can't port your current phone number to their system, you have to get a new one.  That sounds like kind of a pain, but on the other hand, it might be a good way to do a clean sweep and get away from those people you're sorry you gave your number to!
The big question, though, will be the call quality.  They use a different scheme for making calls than most cellphone providers, and I've heard varying reports on the quality of the calls.  Granted, I don't make many calls at all, but when I do, I kind of want them to go through, you know?
Anyway, they give you 30 days to try it out and if you don't like the service, you can send the phone back and cancel and no hard feelings.  I've already signed up, though have not received my phone yet (they seem to take 2-3 weeks to ship.)  If anyone's interested, I'll report back on my findings and let you know what's what.  For the time being, I'm keeping my Virgin Mobile service, just in case.
And if anyone else signs up, you can make them your friend or some such and thereby earn more data each month.

Annnnnnd...that's it, I guess.  Hopefully, there will be some Pyrex or Corningware or something worth buying at the thrifts next week.

So until then, I'm linking up with  Sir Thrift A Lot, Thrifter/Maker/Fixer/Farm, The Nifty Thrifty, and We Call It Junkin.