Here's something different:  I'm not going to start off by complaining about the weather!  It was really quite lovely this weekend, if a little humid.  Turned on the ceiling fans because I absolutely refuse to turn on the AC in April.

So.  We hit our usual spots, as well as a flea market.  Can't tell you how long it's been since we went to one.  The thrifts all seemed to be overflowing with merchandise this weekend--full shelves and unshelved carts all over the place.

And yet somehow there was nothing worth buying.  I almost got a new decanter for my mouthwash, but it was marked $8.00, which was about $7.00 more than it was worth.

Well, there was almost nothing worth buying.  I did get a couple of things, including the above-mentioned vintage linen.  Oh, and there was an Avon lady at the flea market, so I managed to scoop up 10 tubes of the hand cream that Hubby likes at two bucks a pop.  It was worth stopping just for that.  No picture, because who wants to look at new hand cream? 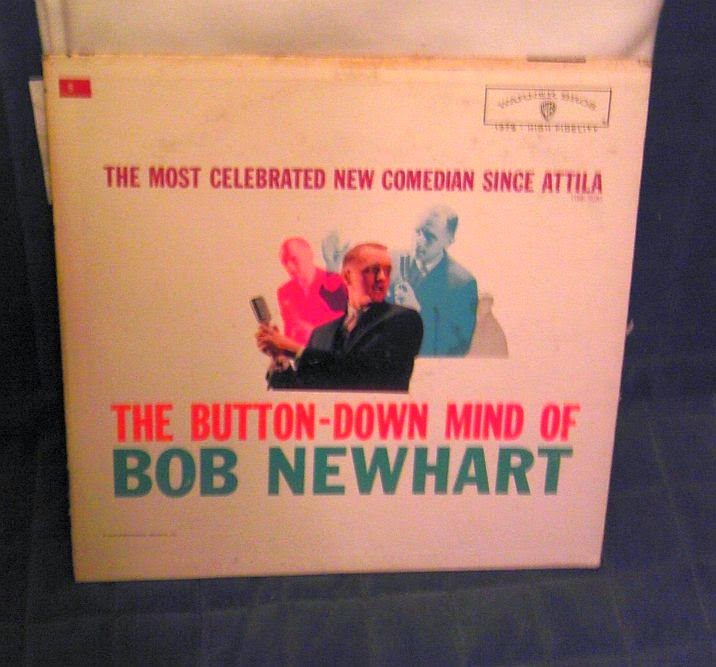 1.  Bob Newhart!  Yeah, I'm pretty sure I said sometime back that I wasn't going to buy any more records. But c'mon--this is Bob Newhart.  Unfortunately, it's not the album with the bit about the Grace L. Ferguson Airline and Storm Door Company, but it'll still be good.  Rescue Mission Thrift, $1.00

2.  Vintage Tablecloth!  Christmas tablecloth, no less!  My first!  I can honestly say that this is my first-ever sighting of a vintage tablecloth, much less a Christmas one.  It had some pretty bad stains, but most of them came out with an overnight soak in Oxyclean and Biz.  There are a couple of "shadows" still, but I think a little Spray & Wash and another trip through the washer ought to take care of the problem.  I made the rookie mistake of not unfolding it and checking for damage but luckily, there was none.  I don't think it'll fit my dining room table but on the other hand, there isn't a tablecloth made that will fit it.  So I'll just deal with it.  No tag, so I don't know who made it.  Flea market, $5.00

And that's it for the purchases this weekend.

In Other News:  Your ol' Uncle Veg had a bit of an adventure this past week.  Okay, it wasn't much of an adventure, but you know how I live--anything out of the ordinary is an adventure.  Anyhoo, I got to do a taste test for a spice company!  I don't know if I'm supposed to mention the company or not, but I live in Maryland and it's a major spice company, so do the math.  Basically, I got paid 30 clams to eat two chicken tenders.  Can't say I cared much for either one, but the money was good.
Edit:  If you're interested, you can sign up here: :  https://mccormickconsumertesting.at-hand.net/tqm/AppForm.aspx
I love doing this kind of thing.  A few years back, I was on a consumer panel for a major power tool manufacturer (again, this is Maryland, so put 2 and 2 together) about rechargeable vacuum cleaners.  I can't remember if I got paid or not, but I definitely walked out with a very fancy Dustbuster, and they also sent me one of those rechargeable jump starters that I put in Hubby's trunk because I worry about him.

Thriftiness Update:  You may remember from last week that I've begun a program of belt-tightening.  Here's the update so far:

Newspaper:  We have officially started our $10/year Wednesday 'n Weekend subscription.  Of course, the old subscription hasn't expired yet, so we're getting doubles.  Which is fine on Sunday, because it means double coupons.

FIOS:  This was kind of a nightmare, but what do you expect from Verizon?  I successfully cancelled our TV service and when I did, the woman I spoke to said "Oh.  Looks like I saved you another $5.00 a month.  I'm not sure why..."  Okay, that's fine by me.  I also asked to have the speed of our Interwebz access bumped up and supposedly that went through as well.  And yet somehow I managed to still save $15.00 a month.
Well, it turns out that the Interwebz upgrade actually didn't happen, which explains the savings.  When I called to get it bumped up, the woman said it would add 10 bucks a month to the bill, which is exactly what I expected.
Until she told me that her system was adding 20 bucks a month to the bill.  Even though it should only have cost 10.  She was understandably confused, yet didn't seem at all motivated to find and fix the problem.  So I left things as they are and for the time being, I'll enjoy my $15.00 a month savings.  I may revisit this in the future, but it's fine the way things stand now.

FreedomPop:  Still have not received my new cellphone, so cannot comment on the service.  Well, I guess I can, since they say it'll take 2-3 weeks to ship the phone, which seems like an awful long time to me.  But I'll hang on and when the new phone arrives, I'll report back.

And that's it for this week's installment.  Linking up with  Sir Thrift A Lot, Thrifter/Maker/Fixer/Farm, and We Call It Junkin.
Posted by veg-o-matic at 11:48 AM