Once again, there was diddlysquat in the thrifts this week, though I did manage to pick up something tasty for someone else.

Hubs took off work all last week, and I was off Thursday and Friday.  We did a lot of maintenance-type stuff--got our hair cut, had our eyes examined, got a marriage license :).  That sort of thing.  I got waylaid by a migraine on Friday (I could feel it coming on and between having my pupils dilated and that bright light shining at me, well, that didn't make it any better), but by Saturday I had pretty much bounced back.  Thank you, Imitrex.

Since we missed our usual Sunday rounds last week, Hubs and I decided to make up for it on Thursday.

Is Thursday some big thrifting day?  The stores were packed, despite not having any special sales or anything.  And it was all of them, not just one or two.  They're not that busy on the weekend.  Yeesh.

Didn't find anything, though.  Nothing even slightly tempting, darnit.

So since we already did our usual rounds, we decided to head up to Hanover, PA yesterday to hit a couple of Goodwills and the Community Aid(??) thrift store.  I only found one item, one that probably needs a bit of an explanation.

I have a friend at work who just got promoted and is a HUGE New Kids on the Block fan. I mean, a major major fan.  So when I found this on the shelf, well, buying it was a no-brainer: 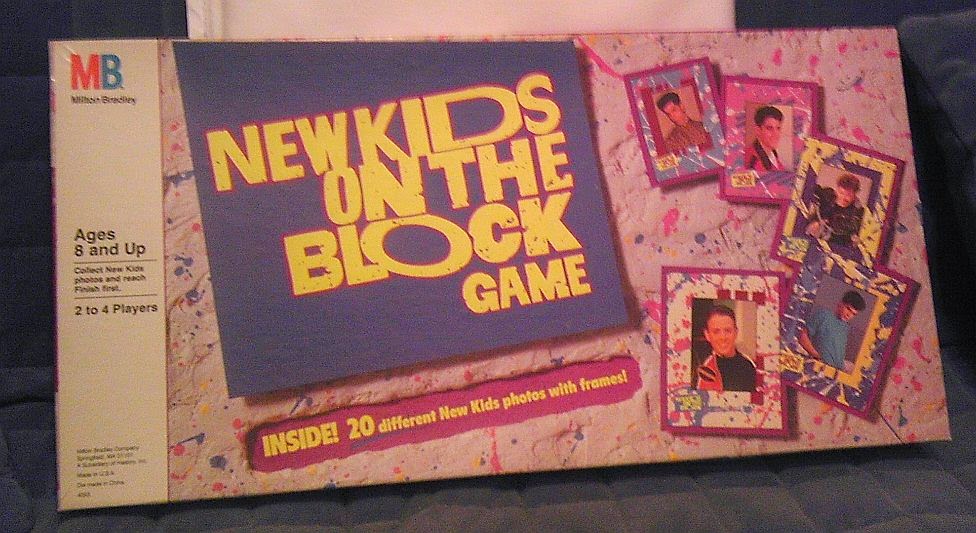 1.  New Kids on the Block game!  I had a moment of unease when I realized that I really don't know one boy band from another, and that these dudes might be the wrong ones.  But then I kind of recognized one of the guys from a picture over her desk and figured these dudes were the right dudes.  They also had a NKOTB (that's what people In The Know call them, apparently) lunch box, but I thought that might be overkill.

And that's it, kiddies.  Nothing for your ol' Uncle Veg, nothing for the Hubster.  On the other hand, who knows what we'll find next week, right?  It could be anything!

In Other News Department:  I finally got my FreedomPop phone on Friday.  It's a little early yet to make a final decision, but everything seems okay so far.  Not fabulous, okay.  Which, given the cost, is still pretty good.  I've found that with every new phone I've had, there is a teething period that you need to get through before making a final decision.  I'm going to live with this for a while and see what happens.

Due to the lack of really cool thrifted finds, I am linking up rather shame-facedly with Sir Thrift A Lot, Thrifter/Maker/Fixer/Farm, and We Call It Junkin.

Email ThisBlogThis!Share to TwitterShare to FacebookShare to Pinterest
Labels: FreedomPop, New Kids on the Block