After a pretty slow start, this turned out to be a good weekend, thrifting-wise.  Neither hubs nor I got anything at all on Saturday, but when we started making our Sunday rounds, that all changed.  Hubs picked up (among other things) a blue vase similar to the one in this post, and yet another vase that looks like a bong!  Really, who designs those things?

This is probably the best haul I've ever had.  Shall we get started? 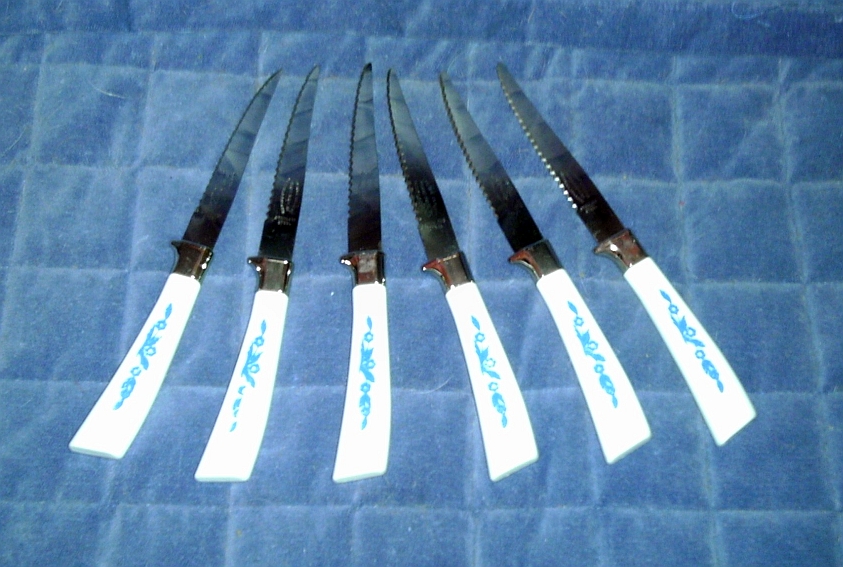 1.  Fake cornflower knives! We already have a bunch of these (they match our china and silverware), but they're really cheap, so I don't think they're going to last very long.  Plus, the handles get yellow so it's nice to have spares.  Got at Savers.  $1.99 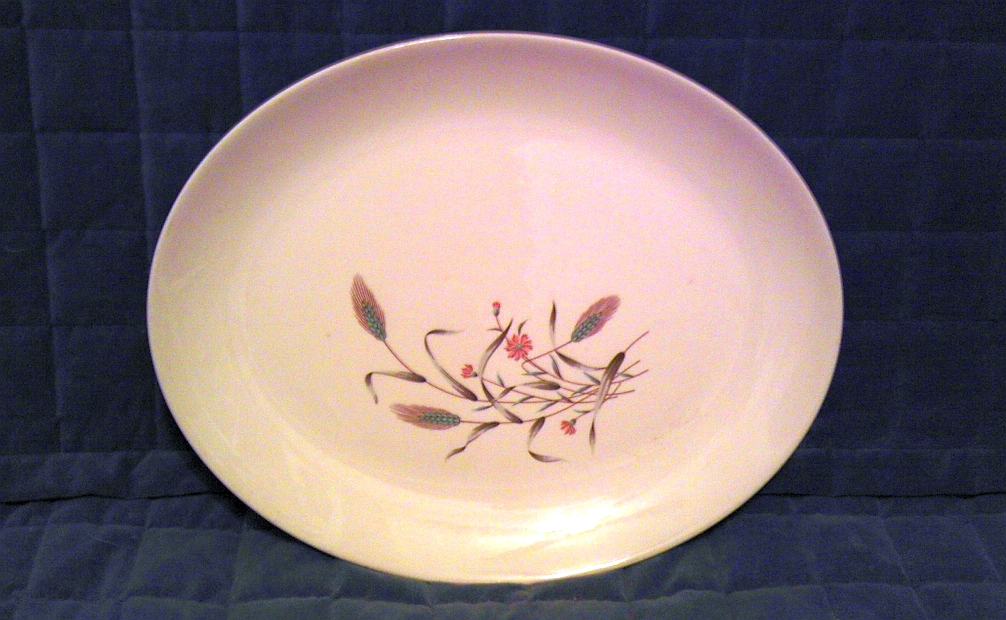 2.  Random platter!  We needed an extra platter and this one filled the bill.  I don't know the pattern name or the manufacturer as it's completely unmarked.  I kind of like it, though, and it was cheap.  The first one I picked up was $5.00.  What's up with the pricing, Goodwill?  This one cost $2.50. 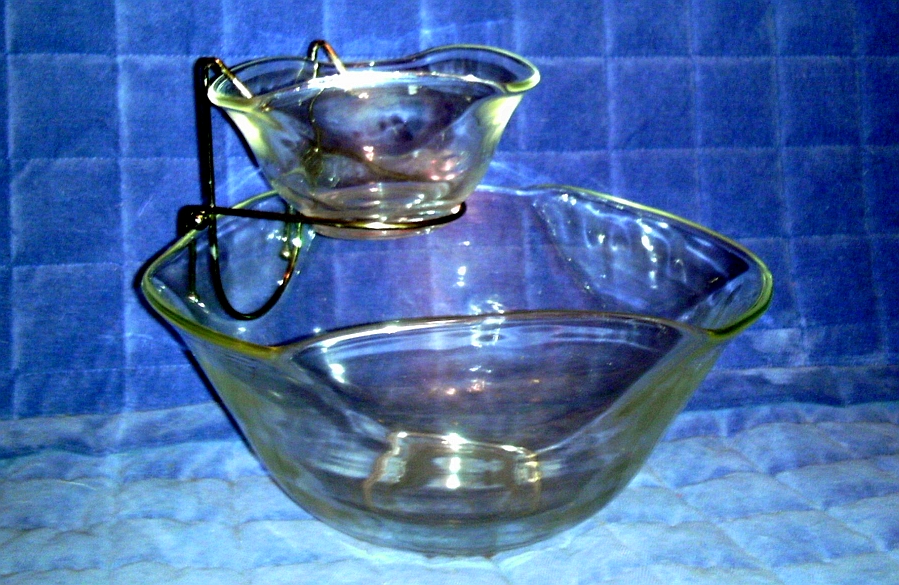 3.  Chip & Dip set!  This came in the original box, but I can't for the life of me remember the manufacturer.  It's not particularly vintage, and it's only slightly cool, but I needed one and this had all the pieces in brand-new condition.  $4.00 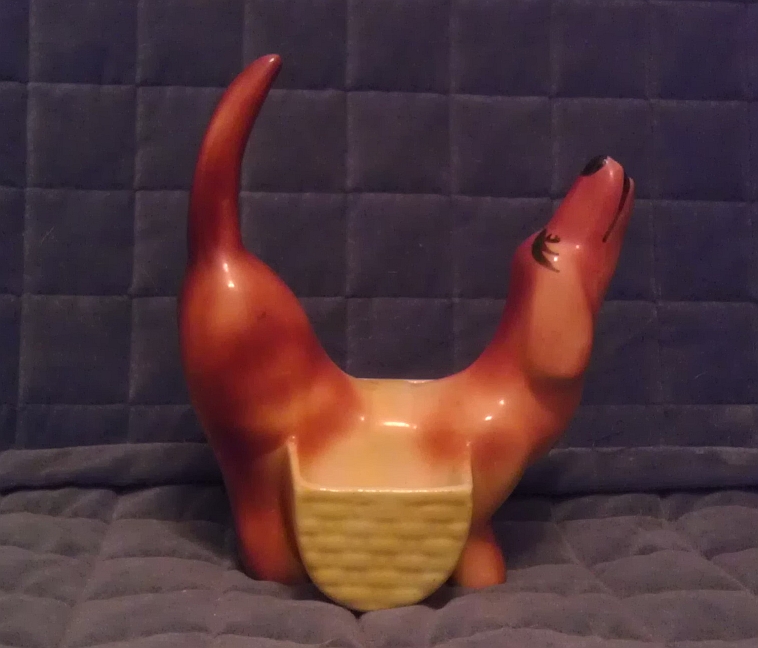 4.  Weiner dog valet!  This was my splurge of the day.  Normally, I wouldn't pay this much for something from the Goodwill, but these don't show up very often and when they do, they're usually chipped.  This one is in perfect condition.  Plus, it's a weiner dog!  I had to buy it!  Oh, and in buying it, I broke my rule of not getting anything that I can't use.  This will have to be purely decorative.  Still, it's a weiner dog! $9.00 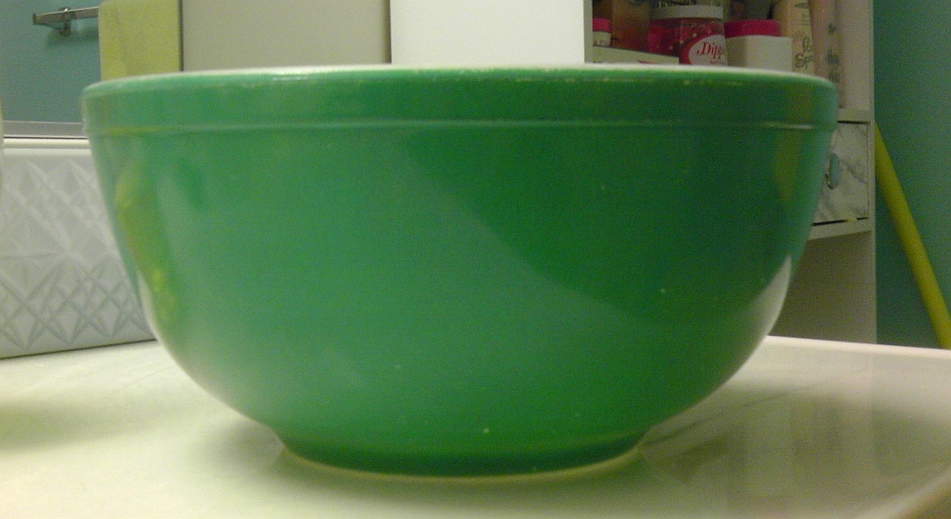 5.  Pyrex!  Look--I found the 403 I needed!  You can probably imagine my pleasure when I spotted this little beauty on the shelf with an unfortunately dishwashered 402 inside it.  This is in good condition--not perfect, certainly, but that's good.  If it were perfect I wouldn't use it and I like to use my stuff.  This--like my yellow 404--only says Pyrex, not the model number.  Apparently, that means it's an older model.  These older ones are supposed to be thicker than the newer ones, but I can't tell the difference. $4.00

(Minor little rant:  I was in line to pay for this behind a guy who clearly runs a business and bought $429.83 worth of stuff.  Now, if you're buying that amount of crap and the person behind you is buying one item, wouldn't you let that person go ahead of you?  I would.  Because I like to think that I'm not a douchebag.
End of rant.) 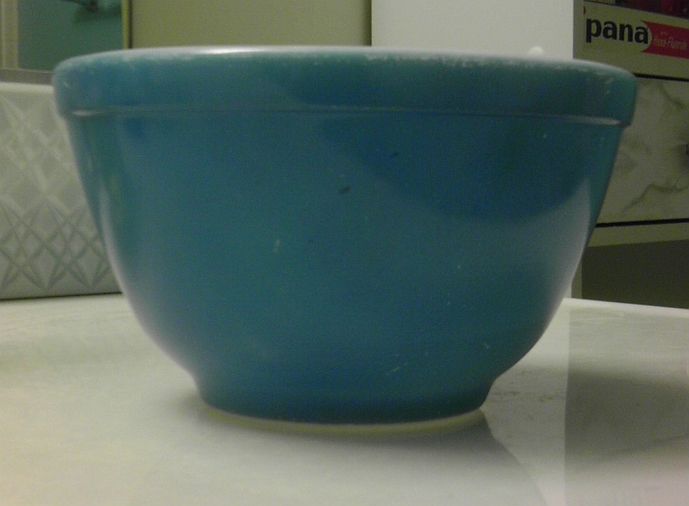 6.  More Pyrex!  And a little while later, I found the 401 I needed, thus completing my set of Primaries!  Woo hoo!  I almost didn't spot this, as there was a dog dish inside it which oddly obscured the color of the bowl.  Like the 403, it's in good, but not perfect, condition.  I doubt that I'll be using this much, as it seems pretty small to be useful.  I've used the 404 a number of times already.  $2.00

That's all, but that's plenty.  I can't remember when I've gotten so much in one day.

Linking up with the delightfulness at Sir Thrift A Lot, The Nifty Thrifty, and The Remnant