Greetings, everyone!  (I did a little re-reading of past posts, and discovered that about 95% of the time, I start off with the word "Well."  Not sure why I do that, but I thought I'd try something a little different this time!)

Okay, so it was another disappointing weekend at the thrifts.  Hubs and I even stopped at a yard sale, something we never do because around here they're usually all about children's clothes and Little Tikes toys.  I almost bought an old reel-to-reel tape recorder but reined myself in at the last minute.

We did, however, come across a bumper crop of WTF this weekend, though. It seemed everywhere I looked, I screwed up my face into that WTF expression, which is doing my crow's feet no good whatsoever!  I took a few pictures to share, but first, here's my sole purchase of the weekend:


1,  Hot buns!  Well, a bun warmer, anyway.  I already have one but it's not very practical, so I got this to replace it.  It has the original box, which I love, but the wrong cord was inside.  Luckily, I have the correct one, so everything works out.  I'll need this for Thanksgiving and Christmas, so it's a purely practical purchase, even though it's vintage and cool.  Plus, the people on the box are pretty groovy.  $3.99 at Savers.

In totally unrelated news, I discovered this coffee maker on ebay the other day, and I think it's something I need to own: 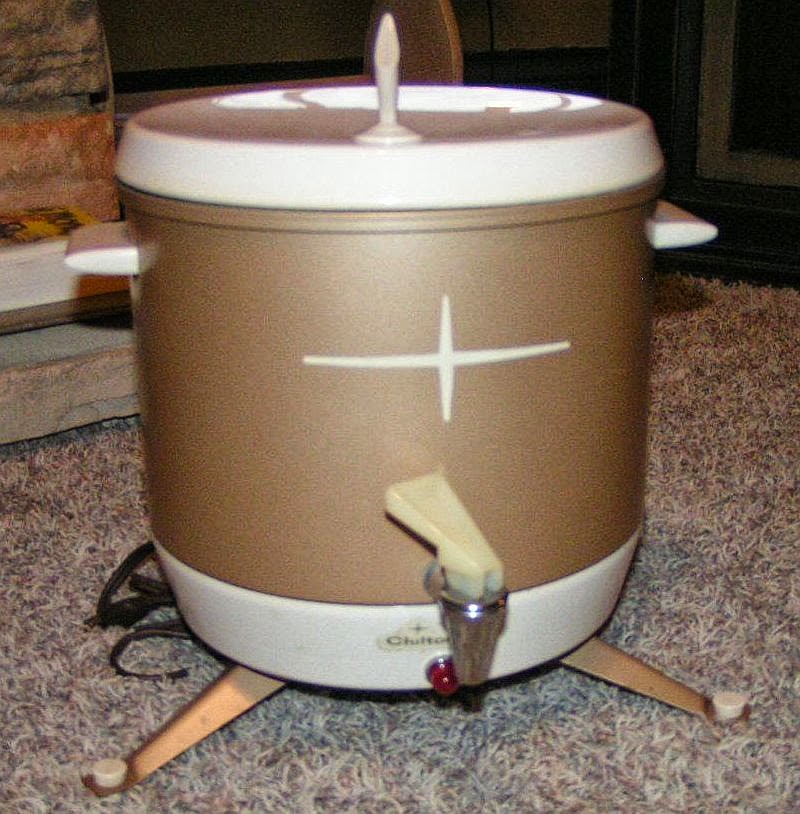 Awesome, no?  I sent this picture off to the hubs and asked what he thought.  His reply?  "I think this belongs in our kitchen!"  I'm waiting until I find one at a price that I like, though.  If anyone comes across one of these in their travels for five bucks, keep me in mind, won't you?

Okay, on the the weird stuff.  Bear in mind that this is only a selection of the stuff I found this weekend.  There was more.  Much more!

A.  Whaaaat???  What is this?  I don't even know.  It's playing some kind of instrument, I think.  This is super-creepy in real life.  The stuff of nightmares.

B.  Boobies!  Dirty boobies, to be exact--Native American woman really should have had a bath before being donated.  But my goodness, that's some cleavage, no?  When I saw it, all I could think of was "motorboat!!"
And that makes me want to rant think:  why do people donate filthy stuff to the Goodwill, etc?  There was a cookie sheet at Savers this week that still had the grease spots from the last batch of cookies!  Come on, people, wash your stuff.  Donating dirty stuff is just nasty.

C.  Obligatory Creepy Clown!  Yeah, the face is bad enough on this one, but there was something about the distended belly that kind of made me hurk a little.  It's like he, I don't know, has some kind of disease or something.  Ew.

D.  What.  The.  F-word!  This is a framed photograph.  Of a gun.  And bullets.  WTF people, WTF?  The frame was actually kind of nice, but that picture of a gun just gave me the willies.  Who does that?  Who frames--and presumably displays in their home--a picture of a gun?

If I were not the wonderful, kind person that I am, all of these items would have been purchased as Christmas gifts for friends and relatives.  And let me tell you, I was tempted!

Linking up with all the fun at Sir Thrift A Lot, The Nifty Thrifty, and We Call It Junkin