Thrifting Finds #30: It's beginning to look a little like...

Christmas!  But just a little.  I know that Halloween is barely over, but Thanksgiving is late this year and I like to get a head start on Christmas.  So if you hear me singing carols in the shower (and if you're in a position to do so, close your eyes, I'm nekkid!!), I hope you'll forgive me.

Anyhoo, hubs and I got to do our usual rounds this weekend, and while most of what I found wasn't very exciting, it was at least useful. Practical.  Not unlike me.  First up: 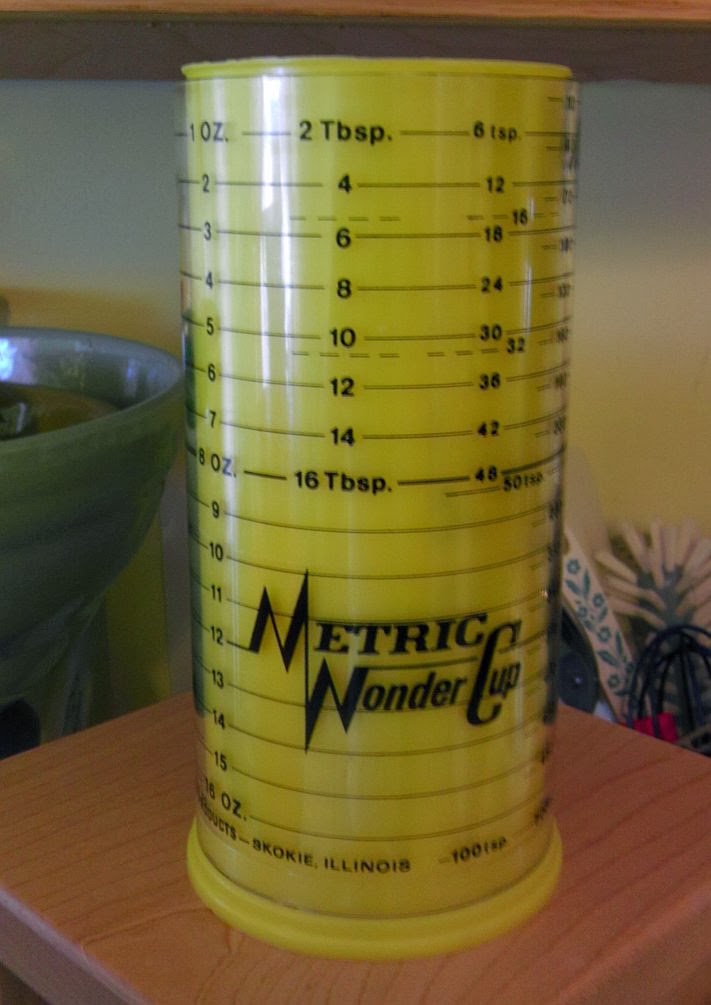 1.  Wonder Cup!  Not very glamorous, I'm afraid, but terribly useful.  In fact, I already used it when I made cookies yesterday (keep reading.)  Whoever previously owned this kept the instructions in the bottom for easy reference--I love that.  Goodwill, $1.25

2.  Buttoneer!  I got a generic one a while back and accidentally bent the all-important needle, so I was very pleased to find this on the Wall O' Bags at Savers.  I was especially pleased at the $1.99 price tag, as these always end up going for crazy money on eBay.  Did I mention that I hate sewing on buttons?  I can do it with the sewing machine fine, but that's such a hassle to set up for a single button. 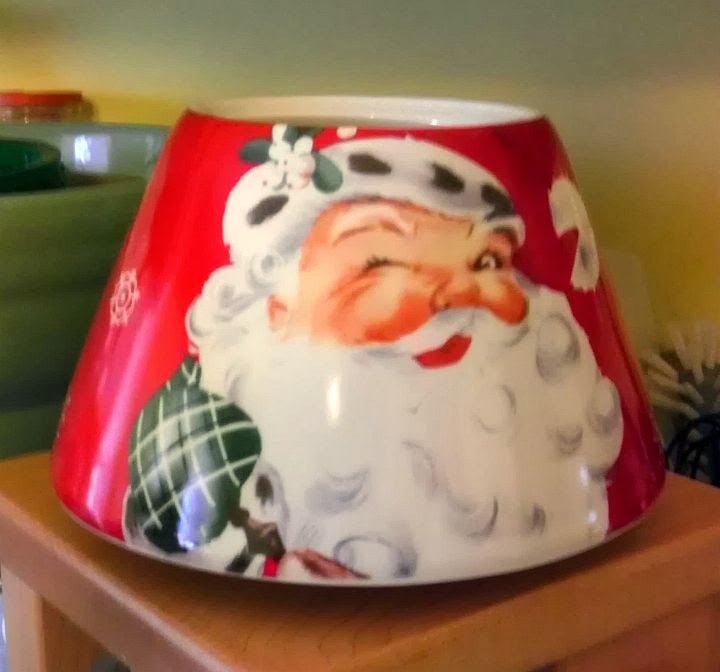 3.  This thing!  I believe this is a sort of lampshade-y thing that you stick on top of one of those bigass Yankee Candles.  Someone correct me if I'm wrong.  I don't actually own any bigass Yankee candles, but I do have a couple of generic ones that get hauled out at Christmas.  I'm pretty sure this is purely decorative, rather than functional.  It was actually a Dollar Store purchase for, uh, $1.00.  I was standing in line when I saw it, and I was taken by the insouciant Santa.  Wink. 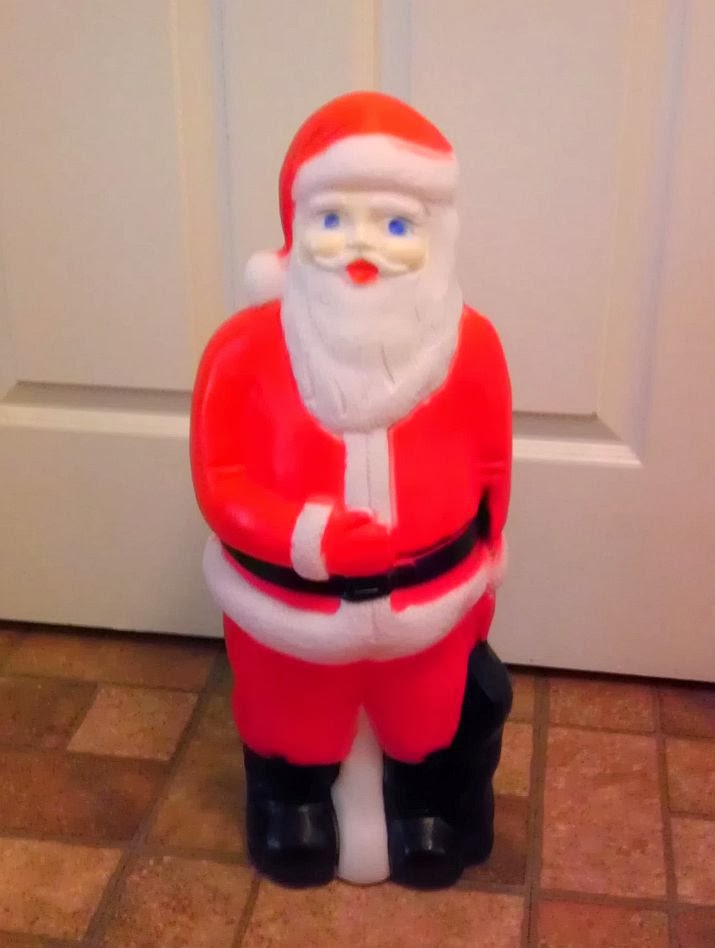 4.  Blowmold!  My first ever!  I'm pretty sure this blowmold is not vintage; I don't even think it's particularly old.  Still, it's the first one I've come across in my travels, and I couldn't beat the price.  I'd say Santa's a good two feet tall, and I haven't decided what to do with him.  He'll either go by the front door or on the balcony, or maybe I'll take him to work with me to decorate my cubicle (have to check the official "how to decorate for Christmas The Holidays memo.)  He had a $2.00 price tag attached to the cord, but that might have been from a garage sale or something, since he also had an "official" $4.00 Goodwill price on the bottom.  The cashier gave him to me for two bucks!  I have no place to store him, so once Christmas is over, back to the GW he goes.

I also bought a serving spoon for $0.25, but didn't take a picture.  You can never have too many serving spoons, particularly with Thanksgiving coming up. 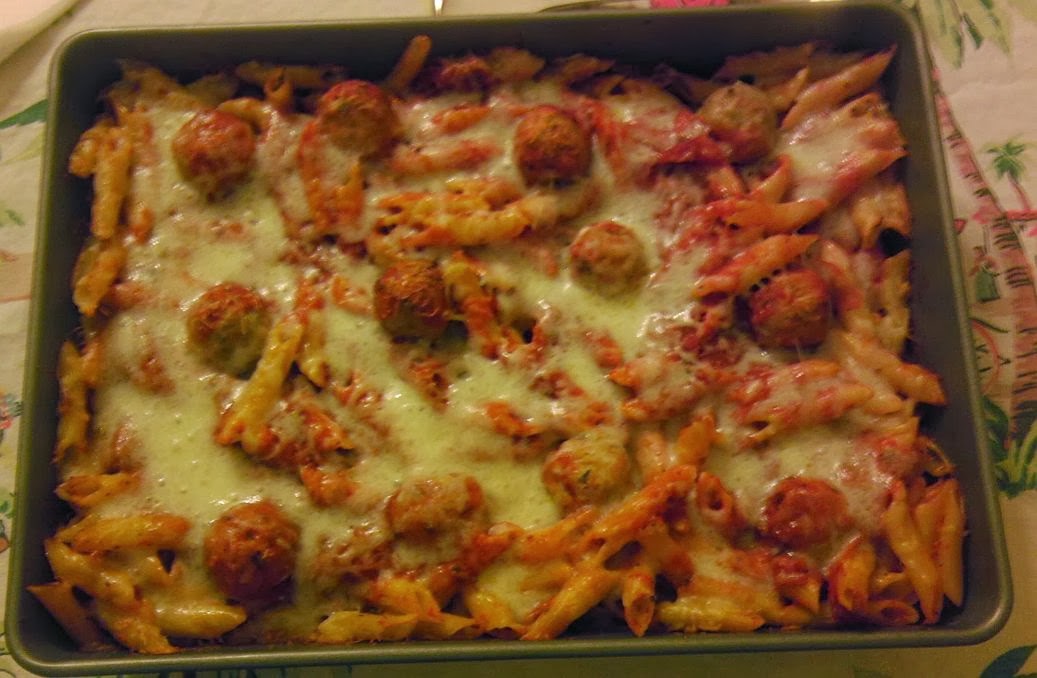 A:  P-P-P-Pasta!  Technically, Penne Pasta with Pesto, Pepperoni, Parmesan, and Provolone (also meatballs, sauce and three other cheeses, but those don't begin with P.)
The verdict?  Pretty pedestrian.
This wasn't an actual recipe, just something I threw together, using ingredients we like.  Unfortunately, it came out kind of bland, despite tossing in some crushed red pepper to give it a little oomph.  I didn't use much pesto because it tends to take over and the pepperoni wasn't very spicy.  So, while it wasn't bad, it just wasn't knock-your-socks-off good, either. 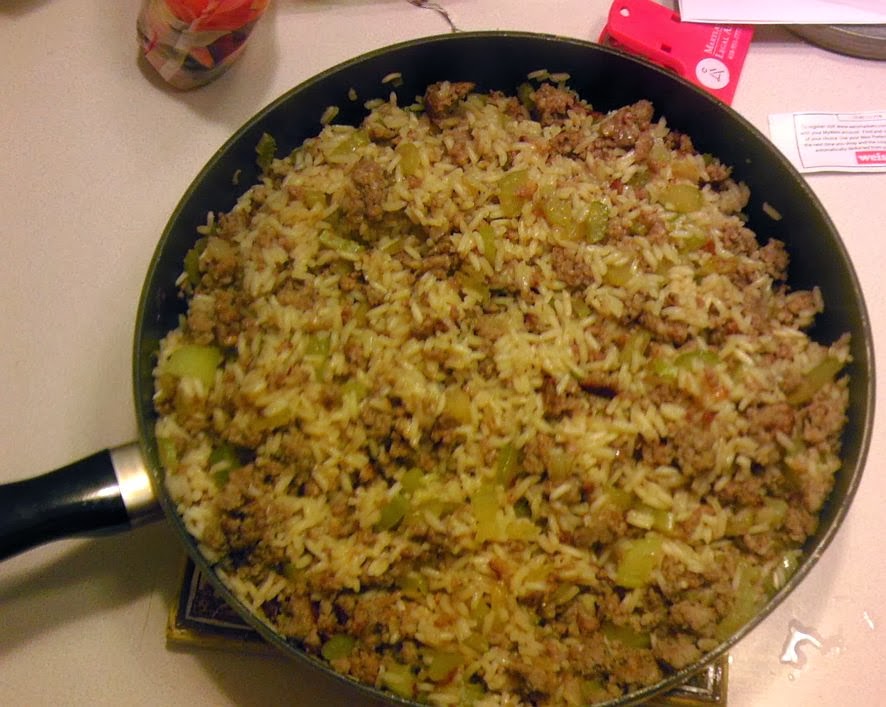 B.  Dr. Martin's Mix!  This recipe comes from The I Hate to Cook Book by Peg Bracken.  I'm not going to give the recipe because you all--every single one of you--need to own this book.  And every other book she wrote, too.  I've read her books literally dozens of times and I still laugh out loud.
Okay, this is basically sausage and rice. I really don't like sausage, but I love this.  It's simple, quick and one of those dishes that is better than the sum of its parts.  P.S.  I don't know what kind of rice Peg was using, but this does not need to simmer for an hour!  Twenty minutes pretty much does it. 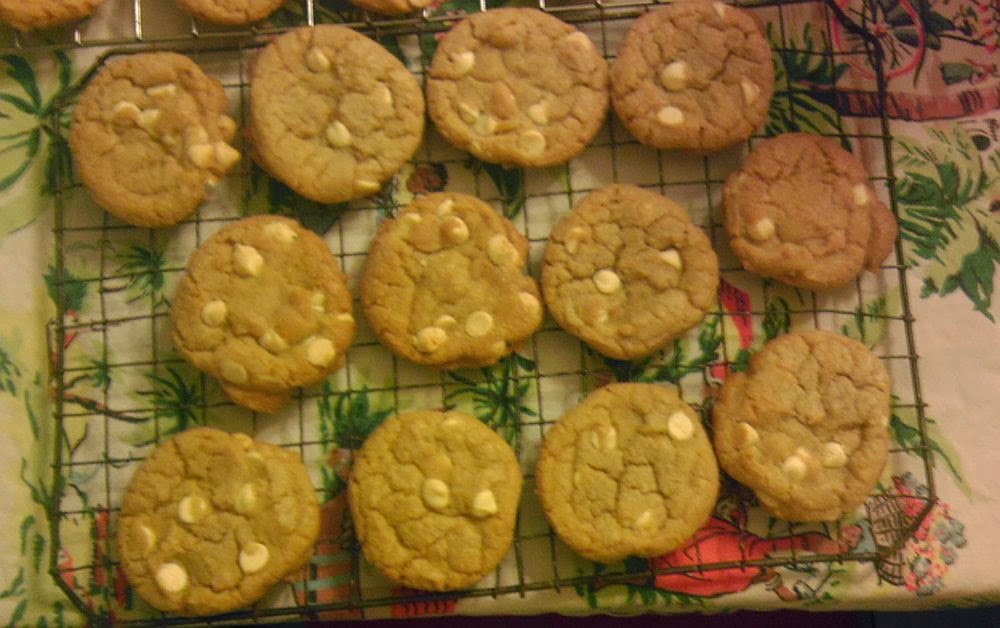 C:  Cookies! We have a cookie exchange at work and a friend of mine is running it this year, so this is the first time I will be participating.  I made White Chocolate Macadamia cookies but I left the Macadamias out, because who wants to spend that kind of money on people at work?  They're delicious even without the nuts.  I used 1/2 cup of butter and 1/4 cup of Crisco instead of all butter.  I think next time, I will use all butter-flavor Crisco* because I like cookies that are chewy instead of crispy. Also, I think two cups of white chocolate chips were too much, so I'll cut back on them as well.  These smell great when they're baking.  I haven't gotten the review from hubs (aka Cookie Monster), but I'm pretty sure he'll approve.

And that's it.  Seven pictures in one post, and my fingers are typed to the bone.  Not to mention the fact that I'm at work and should probably be, uh, working...