Well, I kind of knew--or at least suspected--that after last week's haul, this week would be kind of puny.  And boy howdy was I right.  Not that I found nothing at all, you understand, but, well, you'll see in a minute.

The good news (I always like it when there's good news), is that there's some good new thrifting potential.  To make a short story long, when Hubs and I were in the Rescue Mission thrift last week, I overheard a woman asking if they had a square dining room table.  The man running the place said no, but that he'd call blahblahblah and see if there was one there.

Now, I only heard this conversation "out of the corner of my ear" as it were, so didn't pay too much attention.  And then, thirty seconds later, I forgot about it entirely.

Until late last week that is, and I started wondering.  Then I started doing some research.  Turns out that the Rescue Mission does have another store. It's only a mile or two away, located in a quaint little downtown shopping area.

It's a great store!  Okay, I'll admit I didn't buy anything, but I was certainly tempted.  The RM thrift we usually go to is in an unheated gym, and always seems kind of, I don't know, random.  Like an outlet, I guess.  This other store was heated (much to Hubby's relief!) and clearly had the cream of the crop there.  Everything was neat and well organized, the furniture was immaculate, and there was a ton of stuff.

I was tempted by a couple of end tables, but Hubby thought they were too big (and I think he was right.)  I was also hugely tempted by a coffee table that A) didn't have a drawer (which is what I'm looking for) and B) was likely too big. But it was extremely cool, and only 15 bucks!  I can't wait to go back again next week and see what they have.  I'm sure I missed a lot of stuff, just because I was overwhelmed by the joint.

Also this weekend, I managed to lose my gloves, I think in one of the thrifts we visited.  Oh, well. Serves me right for being careless, and maybe someone who could actually use them found 'em.  Here's a minor problem, though:  have you ever tried to buy gloves in January?  Good luck!  I finally found a few pairs of leather gloves at Macy's.  For eighty bucks.  Yeah, that's not happening.  I have a backup pair, but they're a little slippery for comfortable driving.  I might just give up the search until next winter.

Okay, after all that, are you ready to see what I got?  I hope you're sitting down, because it's, well, it's something... 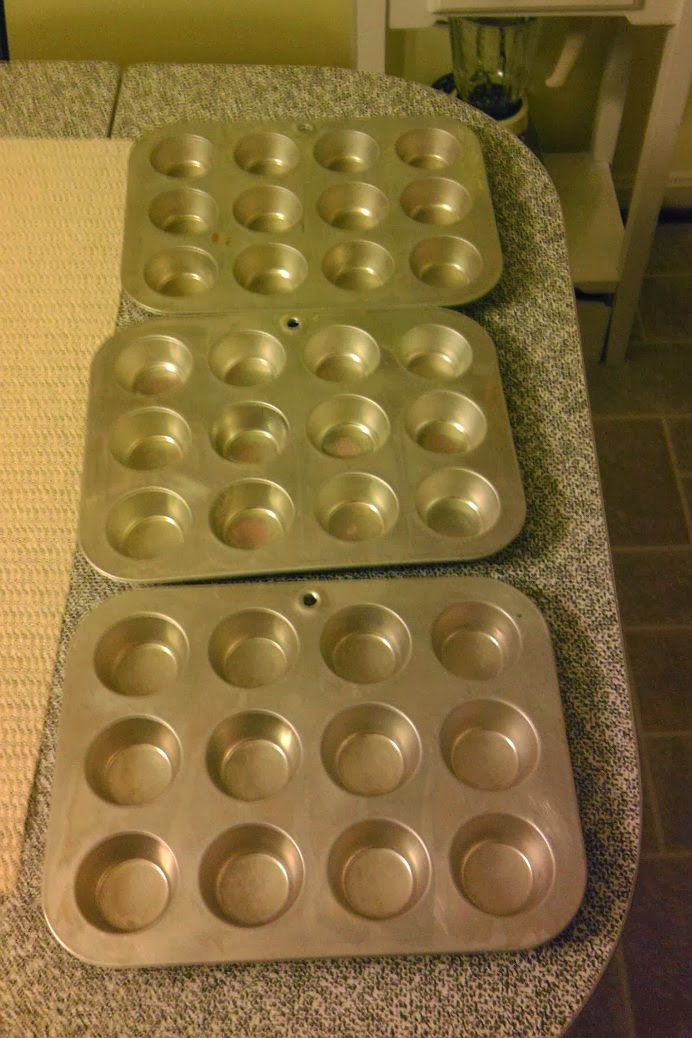 1.  Baking pans!  Three of 'em!  Can you believe it?  Awesome, no?  Okay, no.  But I've been looking for some so I can make those peanut butter cookies with the peanut butter cup inside. They were clean, and only a buck apiece.  Plus, one is marked "Happy Home" which is a Woolworth's trademark, so that made me happy.

Does anyone else miss Woolworths?  Man, I sure do.  Nobody could make a patty melt like Woolworths. Nobody.  I seem to particularly miss the store around Christmastime.  All their stuff was cheap and cheerful, and it was one of the few stores that actually made me feel Christmasy.  I even miss the odd smell that they all seemed to have.

Here's a little something I didn't buy: 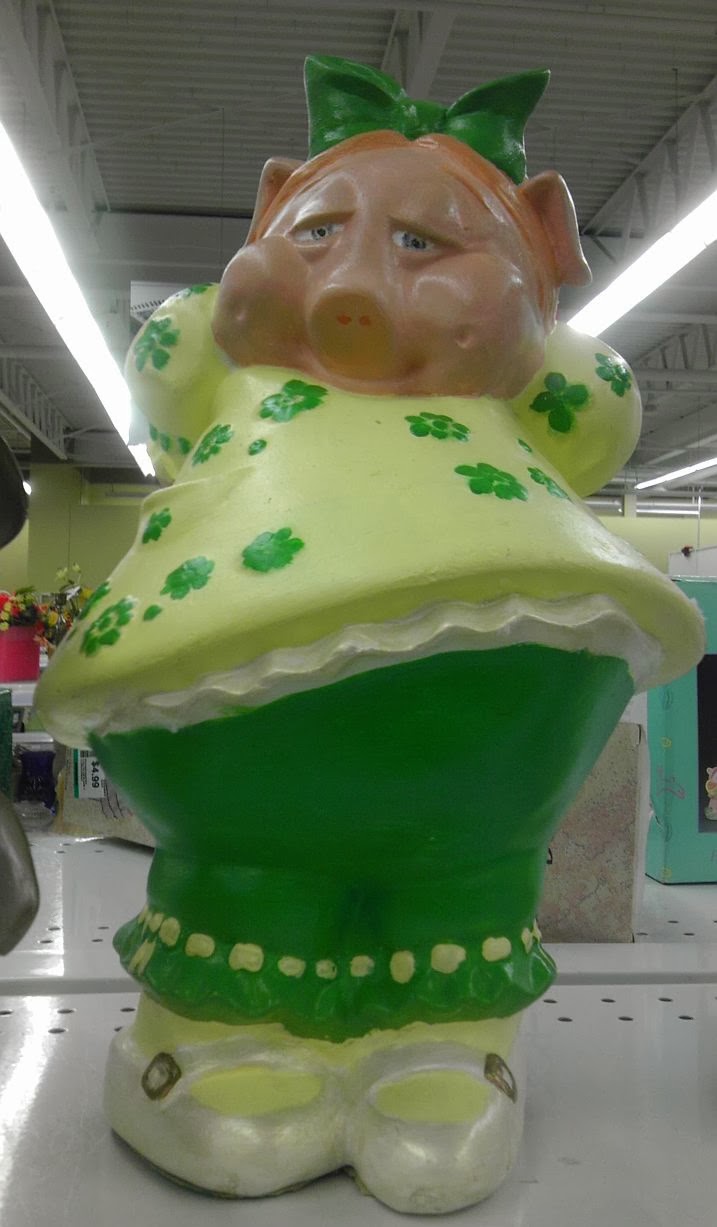 Oink!  This was on the shelf at Savers (who clearly got cleaned out with their sale on Monday and haven't restocked yet) and I couldn't resist taking a picture of it.

My ebay auctions end this evening, and I'm a little disappointed, frankly.  The Cathrineholm fondue isn't generating much excitement--it's up to $11.01--and I'm not sure why.  It's certainly in wonderful condition.  Oddly, the auction with the most watchers is for those doll clothes patterns I got a couple of weeks ago.  Really?  I hoped to recoup my original expenses, but I didn't think that many people would be interested.  Still, watchers aren't bidders, so there's that.

I was hoping to make, if not a killing, at least a nice profit, because I've kind of gone a little insane on ebay lately.  Nothing's arrived yet, but I'll post a couple of pictures of some of the things I've won.

You see, I have this terrible habit on ebay:  If I see something I like, but not necessarily "like like", I'll make a token bid and say "Oh, someone else will outbid me."  Well, that sometimes happens, but often enough I'll find myself the winner of, oh say, a laundromat bleach vending machine* that I really hadn't counted on owning.

What I Made This Weekend: 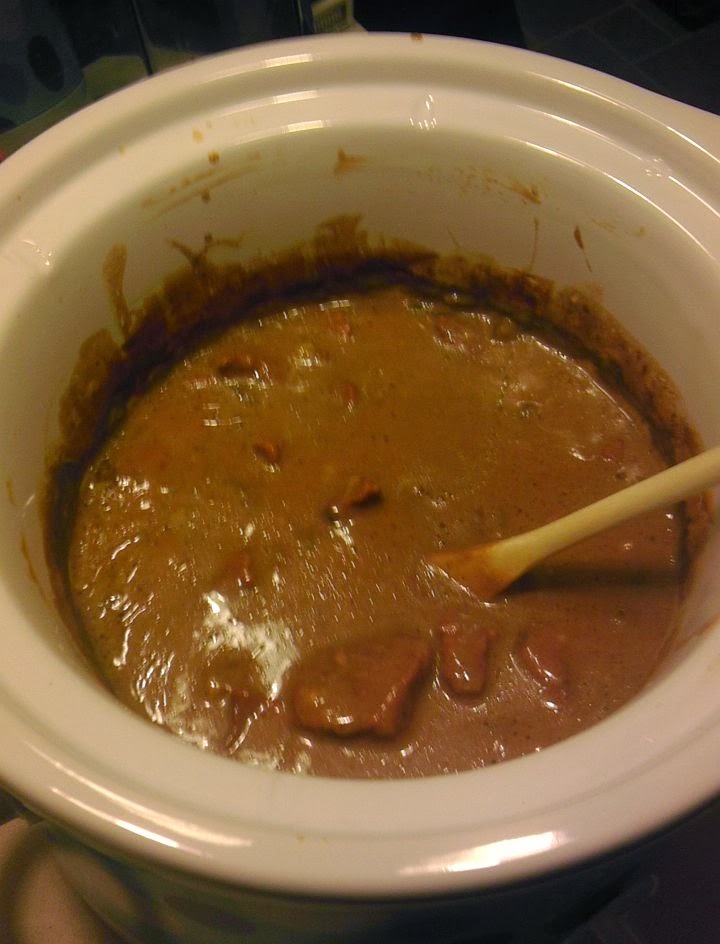 Beef Tips over Noodles!  Sorry, not a good picture.  I find brown is particularly difficult to photograph, particularly under fluorescent lights.  I'll post the recipe if anyone cares.  It's delicious. 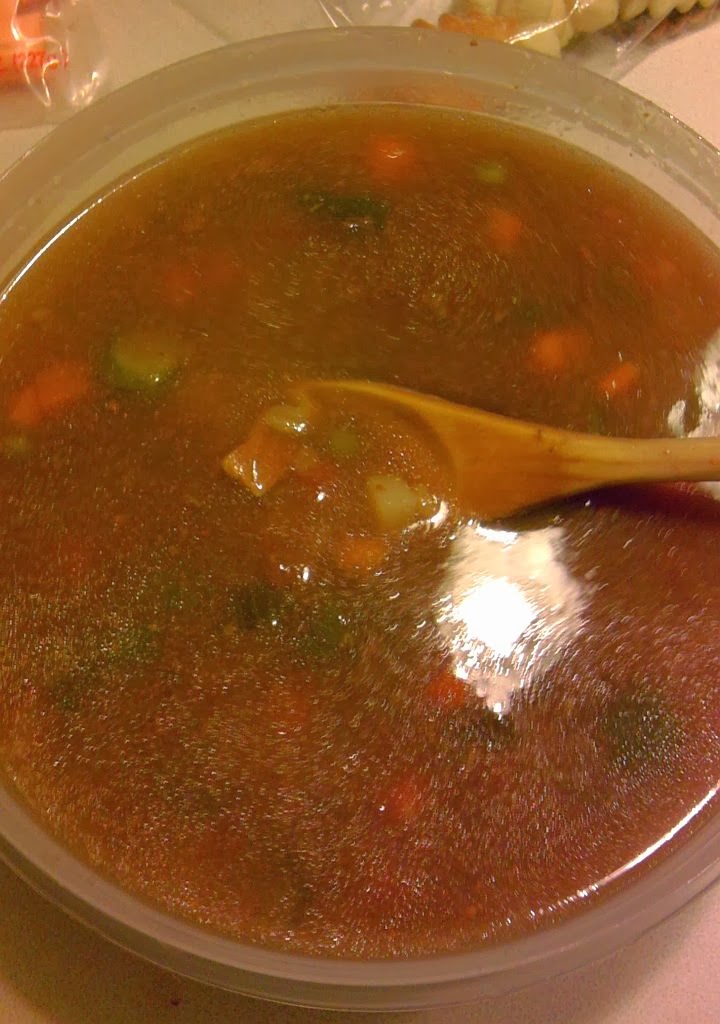 Beef Vegetable Soup!  Actually, I made this a few weeks ago and froze it.  It's supposed to get frigid again here, so Hubs requested some soup this week.

Cheesy biscuits!  Which I completely forgot to take a picture of.  To go with the soup.

I'm not proud of it, but I'm linking up this week with Sir Thrift A Lot, Thrifter/Maker/Fixer/Farm, The Nifty Thrifty  and We Call It Junkin.

Hopefully, next week will be better!