You know, we here at Fondue HQ (and by "we", I mean "me") are a generally easy-going sort.  Not quite glass-is-half-fullish, but more kind of goofily pleasant.

This weather, though, is turning me into a Grumpy Gus.  Enough already.

Yeah, I know it's useless to complain about the weather, but criminy, this is just getting on my nerves.  It's been a constant barrage of precipitation since early December, mixed in with just enough nice days to lull one into a false sense of security.  Last week (I don't remember the day, they're all a blur now...) we got 18 inches of snow.  Okay, that's not too bad, in the Grand Cosmic Scheme, but WHY ARE THE PILES OF SNOW TEN FEET HIGH????  I think there's some law of physics that's not being adhered to here.

Okay, enough ranting.  Thanks for sticking with me.

Anyway, it was a pretty good weekend at the thrifts, despite the weather.  We skipped a couple of our usual stops because I knew the parking lots were going to be nightmarish.  Two places were having President's Day sales.  The Goodwill had 50% off everything, and it turned into Hillbilly Day/Bring Your Inbred Children and Don't Watch Them Day.  It was kind of awful.  Hubby lasted about 2 minutes before he ran screaming out to the parking lot.  I lasted a little longer, but not much.  The people at Saver's were much better behaved, but there were so many of them that I was starting to get annoyed (and youall know how hard that is.)

Hmmm. I think I just ranted again.  See?  This weather is bringing out the worst in me.

So.  Let's get to the Thrift Finds!  And here I'd like to apologize for the quality of the photographs.  I don't know what happened or why they're all so terrible.  My phone seems to take either really good pictures or really horrid ones, and I can't figure out why it happens. 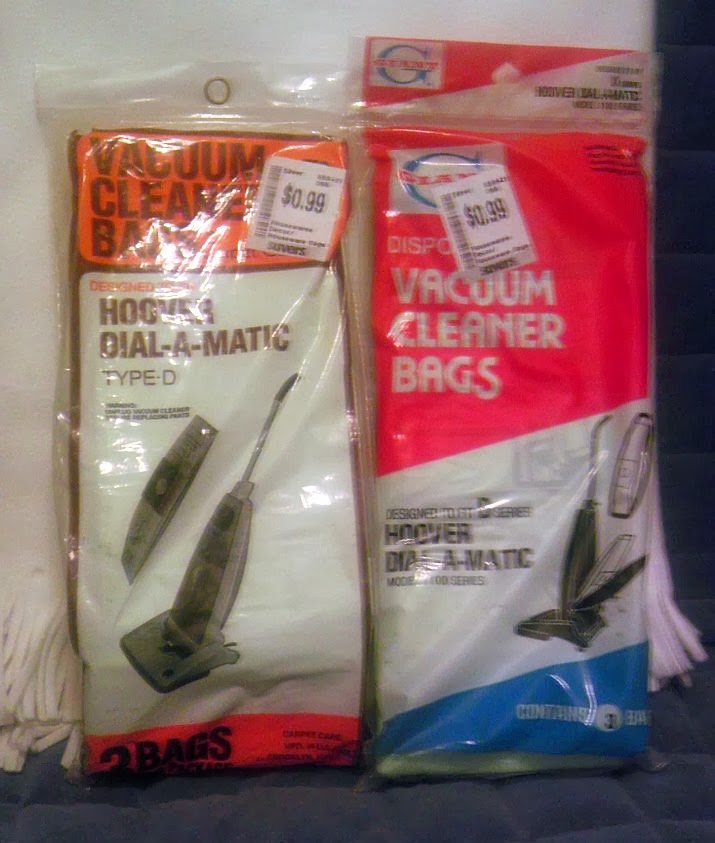 1.  Vacuum cleaner bags!  Yeah, I know these aren't very exciting, but a pack sets me back five bucks at the sewing machine/vacuum cleaner store.  I couldn't argue with .99 each.  Just to give this a kind of vintage slant, they fit my vacuum which is the same one Laura Petrie won on "Pay As You Go!" in the episode "Coast To Coast Big Mouth."  The last time Saver's had their half-off sale, it was advertised as clothes, bedding, and shoes only, but turned out they were discounting everything in the store.  Didn't happen this time, so .99/each.
By the way, why do sewing machines and vacuum cleaners seem to go together? 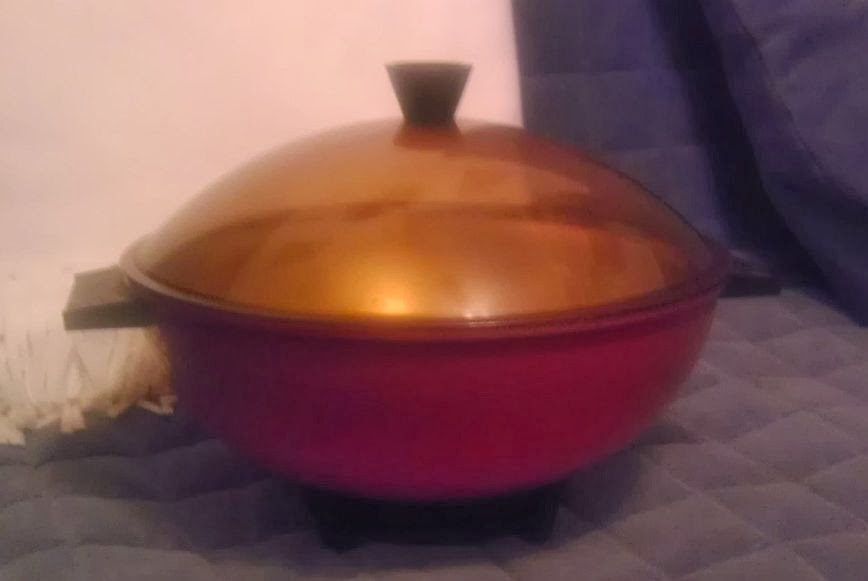 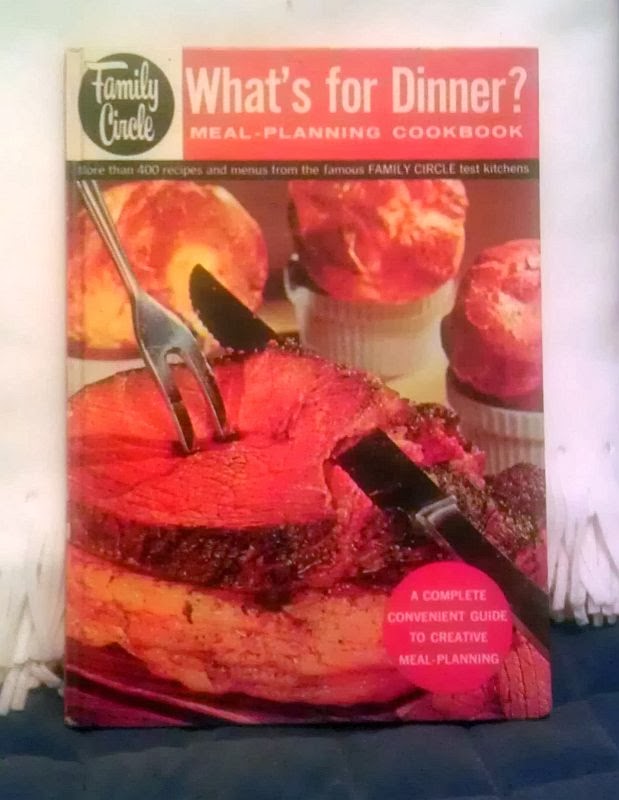 3.  Holy Cwap, Another Cookbook?  So yeah, I found that I couldn't resist this.  I've only quickly flipped through it so I can't report on it yet, but Family Circle had a reputation for publishing some truly WTF recipes, so I'm hoping to find some good stuff in here.  Saver's, $1.99. 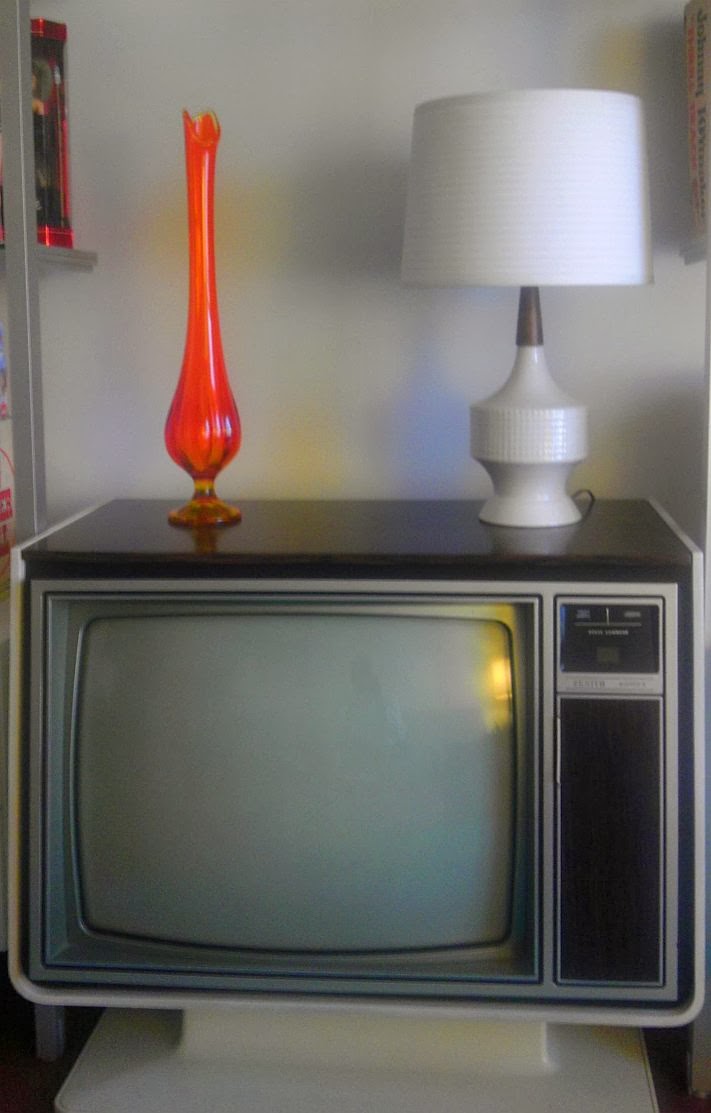 I spotted this baby the moment I walked into the Goodwill.   As gracefully as a gazelle, I sprinted over to the shelf and grabbed it.  I actually said "Snatch!" out loud as I did.  Did the fact that there was a $12.50(!!) price tag on it dampen my joy?  It did not--I have a gift card!  So yeah, I was a happy boy.

Which brings up a point (and I feel another rant coming on):  what is UP with the Goodwill pricing lately?  One of our usual stops seems to have a new pricing person on staff, a person who is apparently convinced that they are reselling gold.  And now another one is suffering from the same disease.  I realize it's all for charity, but come on.  One GW actually had a stack of disposable plastic plates from microwave frozen dinners.  Maybe 40 in the stack?  I didn't count.  Price:  10 bucks.

It's February and I finally got my Christmas present from Hubby!  Okay, let me explain:  I asked for a new cordless drill and flashlight, but I would only let him get one for a price that I thought was reasonable.  Ended up not finding anything, so Hubs gave me a gift card instead.  I bought a drill but couldn't find a rechargeable flashlight that I liked.  They I stumbled across a battery store that would rebuild the non-replaceable batteries from my old drill/flashlight. Great!  I returned the drill I bought and had the batteries rebuilt.  It was kind of expensive, but by doing so I could save not only the drill and flashlight, but also the sander, saber saw, and circular saw that was part of the set.

To make a long story longer, flash forward two weeks to discover that the rebuilt batteries didn't work.  Well, they worked, actually, they just wouldn't recharge.  So I took 'em back.  Bummer.

There's a bright spot, though:  by sheer accident, I discovered a sale on a drill/flashlight combo that was not only what I wanted, but cheap, too.  So we went to the store and got the set.  I also wanted to get a spare battery, but the difference between the battery alone and the whole set was only five bucks, so I now have a spare drill, flashlight, and charger in stock.  Plus, they gave me a really nice tape measure for free!


I finished our income taxes a couple of weeks ago and when I went to print them out discovered that my printer didn't want to work.  It's always been a little touchy.  After some frustrating time, I managed to get the WiFi back on line and when I clicked Print, everything seemed to work well--except the pages were all blank!  Plenty of ink, so that's not the problem.  Hmmm.  Let me get out the manual and see if i can fix it.

Oh that's right--there is no manual.  You have to read it on the computer.  Well let me tell you, it was the Most.  Incomprehensible.  Manual.  Ever.  Nothing it said to do worked, and half of what it said to do didn't give a clue about to how to do it.  So out the window it went.  Luckily, it didn't cost me anything, as I got it with points from my credit card.

So I decided to go back to a laser printer and the last one I had was a Samsung and I liked it, so that's what I got.


Now, I could have gotten it for $134.85 from a big online place, or I could get it for $70.00 refurbished from another online place.  I love refurbished stuff because it means someone has actually looked at it and fixed it.  So I went the refurb route and when the site invited me to type in a code to get an additional ten dollars off my order, I did not refuse!  Free shipping? Yes, please!

If you sent me a comment last week and it didn't get published, please don't take it personally:  I'm just a jughead.

What happened was, I selected a bunch of comments to post but I accidentally clicked Delete instead.  I couldn't figure out how to get them back, so they're gone.  I am fairly sure I'm stupid enough to do this again.  Still, I will endeavor not to and in the meantime, please accept my sincere apologies.

All righty.  This post is already too long, so I'm not going to bother posting what I made this weekend (trust me, it was nothing exciting anyway.)

It was a pretty good week, so I'm linking up with Sir Thrift A Lot, Thrifter/Maker/Fixer/Farm, and We Call It Junkin.