Just a quick update, kiddies.  I wanted to let youall know that progress (no matter how small) is being made.

First off, we took down the big flat builder's mirror in the powder room and replaced it with an oval mirror we picked up at a used furniture store.  Sorry, but I forgot to take a picture.  It doesn't really matter though, because the powder room still needs to be painted.

I didn't want to just toss the old mirror, so I put it on top of a cabinet we have.  It's too big, but I like the mirrored-top business.  From the little research I've done, it looks like one can cut mirror at home if one has a glass cutter and a straight edge.  I may just tackle that, so stay tuned.

In other news, we got the couch!  The living room is definitely looking better: 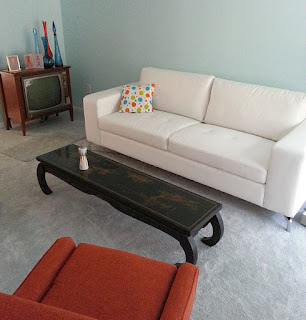 I had the bright idea of renting a U-Haul van instead of paying the $120.00 (I know!) the furniture store wanted for delivery.  It all worked out in the end, but it was a certain amount of hassle, and it ended up costing about $75 bucks.  That's still better than $120, but I think I could have found some random dude on Craigslist with a truck who would have done it for less.

I have a lead on dining room furniture.  Stay tuned!

Didn't get to go thrifting this week, but a friend and I went to the outlets in Lancaster, PA.  Nothing much there, but through a series of events, we found ourselves at a restaurant supply store.

Guys, guys.  If you ever go by a restaurant supply store, go in.  Seriously, I could have done some major damage there.  I mean, did you know you could have your very own nacho cheese pump, just like they have in the movie theater?

In your own home!!

I showed restraint, and only bought two baking sheets (they call them bun pans, I think): 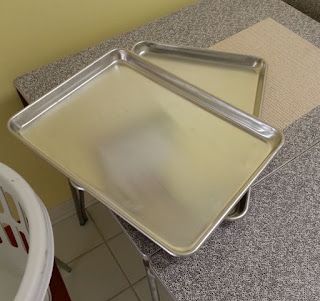 They're 13 X 18 and super heavy aluminum.  The price?  $3.49 each.  Can you believe it?  They'll easily outlast anything you can get at regular retail, and for about 1/4 the price.  If anyone wants to know the name of the store, I'll try to find it.  I know they have a website as well and they don't mind at all selling to just regular people.

That's all for now.  More later as events warrant!