Thrifting Finds #85: And He Goes for the Hat Trick!

Three in a row!  Can you believe it?  I certainly can't!

So I noticed that the last couple of weeks, all the thrifts seem to have a lot more stuff in stock than usual.  I mean chock-full.  Not a whole lot I want, mind you, but the shelves are packed.

Again, all the Christmas stuff seems to be from Walmart or the Dollar Store.  Not that I need any.  When we were moving the HQ, I discovered that we own a crap ton more Christmas stuff than I ever realized.  If I decide to really get into it this year, Christmas could be quite the extravaganza.

It's going to be garish at the very least, and here's why.  I don't know if anyone remembers when I made my ornament wreath: 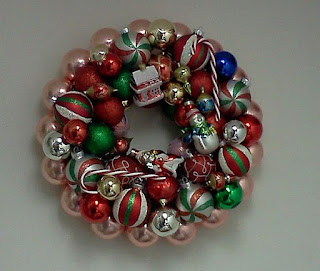 Wellsir, it was a casualty of the move. I loved it, but it was made with almost all new ornaments, so there wasn't a whole lot of emotional attachment.  Anyway, it's gone and I'm not sure I'm up to making another one, but I think I'm going to try my hand at making a Sparkle Ball:

This will be hanging by the Fondue HQ front door, and it will be the only one in the neighborhood, I can guarantee.

But I digress.  What a shock.

Anyway, I managed to pick up two things this weekend, though only one is pictured.  The other item is a plastic milk-crate type thing for holding record albums which, like Christmas decor, we own a whole lot more of than I realized.

Please forgive the grammar and syntax of that sentence.

This is what I want: 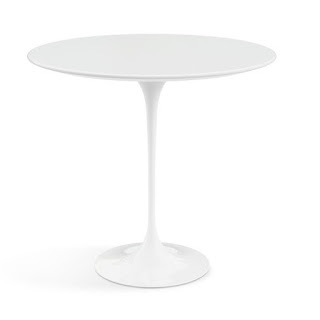 I have just the right place for it, between two chairs in the living room--It's about 24" in diameter.  I am, however, unwilling to pay the 800 clams this table costs.  Then I saw this little table at the Goodwill and thought it would be a good candidate for a makeover: 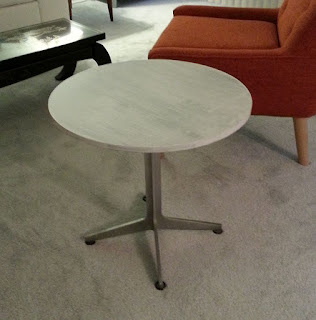 It's not identical, of course, but it's similar, and for seven bucks, I could hardly say no.  It's pictured with the first coat of white paint on it--it's "walnut" Formica underneath.  It'll certainly do until I can find what I'm looking for at a price I'm willing to pay.

This reminds me of a series of articles that used to appear in Metropolitan Home, I think, back in the '70s.  They'd do one room with all chic, luxurious stuff and then do another one that looked similar, but on a budget.

And that's it for this week.  Next week may involve picking up a trash compactor, which will certainly be exciting.   Oh, and Wednesday, we're getting our new furnace and AC unit here at Fondue HQ, and let me tell you, I am WAY more excited about that than I need to be.  Especially since it's costing as much as a car.

Other big news:  we're getting new rollers on the patio doors.  Again, way more excited than I should be!

Tune in again next week and I'll tell you all about it.  In the meantime, I think I'll link up with Thriftasaurus.