Thrifting Finds: Does This Even Count? Edition

Well, once again your ol' Uncle Veg ventured out to the thrifts and did not come home empty-handed.  I do believe this is the longest streak I've ever had.

Not that what I found was amazing, mind you.  In fact, I'm not even sure what I got is really good enough to even mention.

Anyway, it was a pretty busy weekend Chez Fondue, what with getting ready for Thanksgiving and everything.  I think I have a handle on things, but you know as well as I do that the wheels could all fall off at the last minute.

It looks like there will be about 14 of us this year.  I say "about" because there are always those who decide/change their mind at the last minute.  I hope it's not much more than that because if it is, someone's going to end up sitting on the floor, and I suspect it will be me.

But on to the finds!

I didn't even bother taking a picture of this because I thought it was so boring:

CD Player!   I'd been looking for one of these since I got my console stereo a few weeks back, as most of my Christmas music is on CD.  These of course used to be all over the place, but since the advent of MP3 players, they're old hat.  I actually bought two players because they were only 2 bucks each and I didn't know if either worked.  That was a good move, as one of them didn't want to play both channels.  So that one will get tossed.  We listened to some Brazilian jazz last night, and it sounded great coming from the console.  Goodwill, $2.00
P.S. One of them came with a bonus CD inside:  The Cheetah Girls Cheetah-licious Christmas.  Needless to say, I tossed it without listening to it.
UPDATE:  Okay, I just previewed it on Amazon.  My original decision was wise. 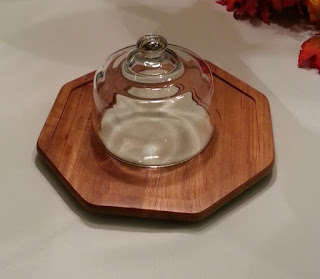 Cheese Dome!  We serve Party Cheese Ball often enough (basically every single time The Girl Child comes by) that I thought it deserved a fitting display.  This was in its original box and looked to be either very lightly used or completely unused.  There was an inadvertently hilarious insert in the box about how the teak comes from some magical forests in Thailand and how the texture of real wood can never be equaled by synthetics, yadda yadda.  Goodwill, $5.00 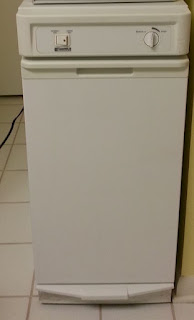 Does This Even Count?  I ask because it wasn't a thrift find but a Craigslist purchase.  It does count?  Because I can do whatever I want with my own blog?  Then

Trash Compactor!  Here at Fondue HQ we only have trash pickup once a week.  And not by a company, either.  It's a 70-something-year-old guy named Lloyd.  Somehow, Hubs and I seem to produce a prodigious amount of trash, so I thought a compactor would be a good idea.  The development next to us (built in the mid '70s) put them in every kitchen.  Have you priced these lately?  They're close to 600 bucks, and go up. Way up.  I found this on CL, as I say, for 99 bucks.  Bought it from a lovely couple who only used it a couple of times and weren't impressed.  I'm liking it so far, particularly when we use the "Extra Pac" cycle, which really squashes the stuff down.  Craigslist, $99.00

And that's it for the finds, but I do have one more thing I want to report on:  I did a craft.

Remember a couple of weeks ago when I mentioned Sparkle Balls and how I thought I would make one?  Wellsir, I did: 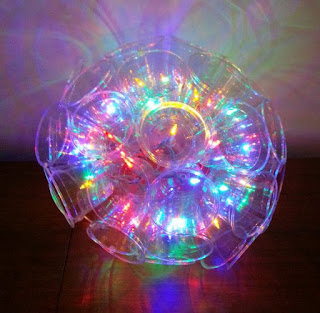 This was my first--and likely last--attempt.  It was truly a pain to make.  I didn't buy the fancy stapler you need and my stapler didn't work, so I had to melt the cups together with a soldering iron.  I also used the soldering iron to make the hole in the bottom of each cup, which I had to do twice because I didn't make them big enough the first time around,.  As you can see, this is not perfectly spherical, but I'm hoping that won't be blatantly obvious when I get it hung up by the front door.  I'm guessing that if I ever stumble across the proper stapler at a thrift store, I might buy it and give this another go, but this one is going to have to do for now.

Hopefully we'll run into each other again next week, but until then, Hubs and I wish all of you a wonderful Thanksgiving!

Linking up, as usual, with Thriftasaurus.