Felt a migraine coming on this morning, so I took a  pill for it.  Unfortunately, that introduces its own set of problems, so I'm not feeling tip-top today.

Plus, hey guess what it did yesterday?

Tomorrow's April. This had better stop.

Anyway.  I want to take a moment to thank youall for your comments and emails about our wedding rings.  I love the fact that even though I haven't technically met most of you in person, we're still friends anyway.  Don't you think that's kind of cool?

Looks like we're probably going to go down the Amazon route.  It sounds easy until you realize that they have eleventy-million  wedding rings to choose from, and I'm not good about making a decision.

Plus, we have a birthday!  My cheesy little slice of the blogosphere is officially a year old!  Actually, it was a year old three weeks ago, but I never said I was good at details. 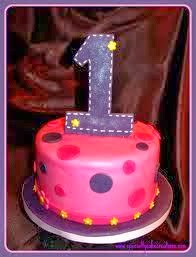 So Happy Birthday to me!  I'd celebrate with a slab of cake, but since I can barely fit into my jeans as it is, I'll have to forego it.

Too bad the pickins at the thrifts were so thin this week.  We had torrential rain yesterday (which turned into sleet and snow, see above) which did not keep people out of one of the Goodwills, but totally did keep people out of the Savers.  I don't know how to explain that.

So here's what I found: 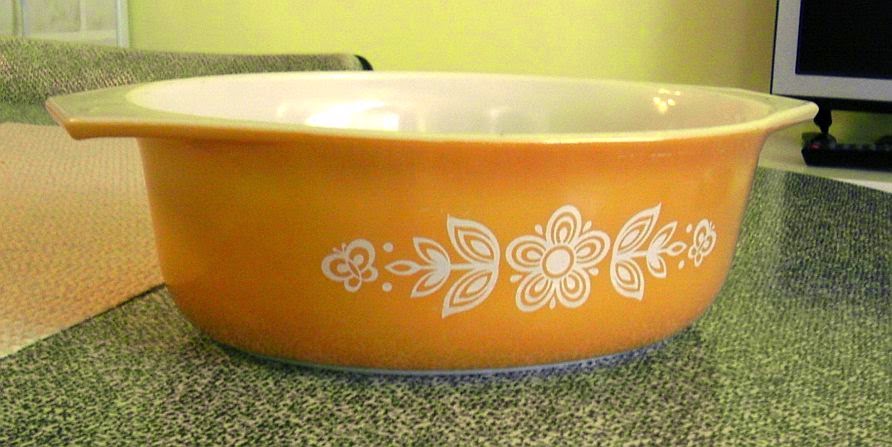 1. Butterfly Gold Casserole!  Let me start out by saying that I do not collect this pattern, despite the fact that I got this yesterday and a gravy boat last week.  I'm going to chalk this purchase up to "empty hand syndrome" and leave it at that.  And since I only have two pieces of BG, it is officially not  a collection.  Whew.  No lid, but I can probably find one later.  Goodwill, $3.00

And by the way, it looks like they've got someone new pricing the Pyrex at the GW.  I saw a Spring Green casserole with lid that I thought I might buy until I saw that it was marked $18.00.  Now, that's probably not a bad price for it (though correct me if I'm wrong), but that seems more of a retail or antique mall price than a thrift store price.  Hubby keeps picking up things he likes, looking at the prices and shaking his head.

What's Cooking? Department The Spotless* Test Kitchens here at Fondue HQ went out on a limb this week, as you'll see in a moment.  But first, a bit of Pedestrian Pasta: 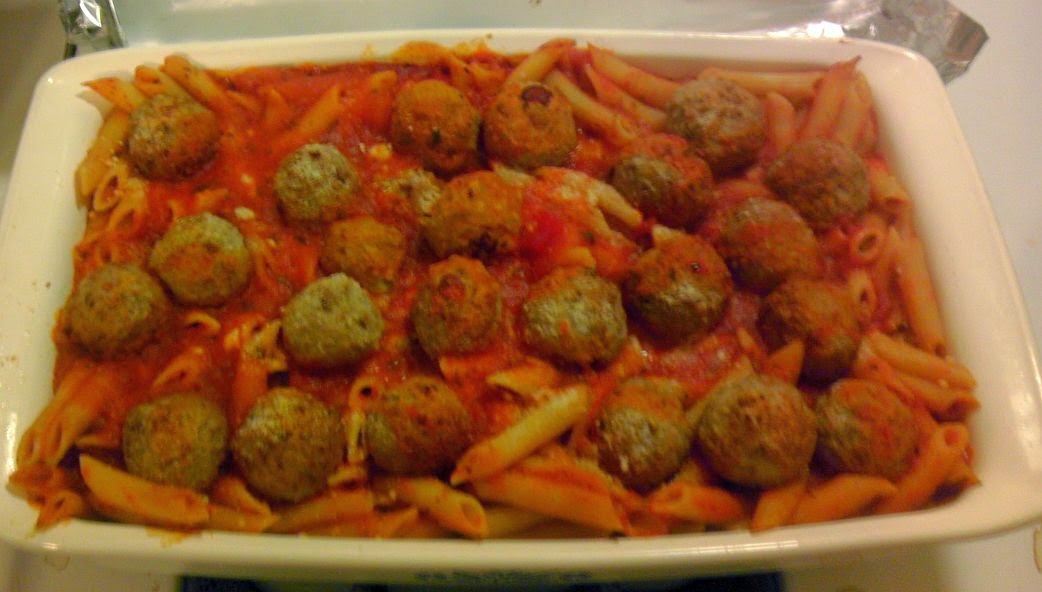 Baked Penne with Meatballs!  Plus a healthy shot of pesto for good measure.  I don't know why it is, but my pasta always seems really dry, no matter how much sauce I use.  Any ideas?  I bake it covered and try not to overcook it, so I'm not sure what I'm doing wrong. It's palatable, but never juicy enough. 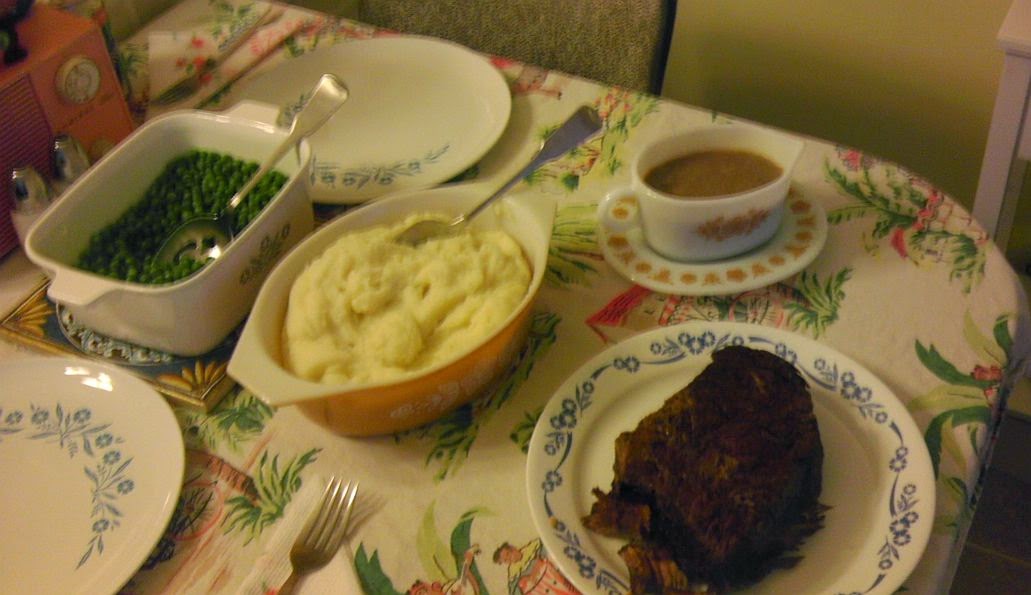 Peking Roast!  This needs a bit of explanation.  I got the recipe from an old "Hints from Heloise" book.  She said it came from a Chinese hotel famous for its tender beef.  Basically, you marinate the roast in vinegar overnight, then pour it off and pot roast it in coffee.  Weird, huh?  It was one of those recipes that was just so strange that I had to try it.  On the good side, it didn't taste of coffee when all was said and done.  And it smelled great while it was cooking in the Crock Pot.  It didn't look too good--kinda like a hunk of beef floating in ink, but it was extremely tender.  Unfortunately, it was overall kind of bland.  Certainly no more effort than making a regular pot roast, but not really worth making again.  I'm a little skeptical of its Chinese origins, too--one doesn't usually associate China with coffee, you know?
Notice that I managed to sneak in the new Butterfly Gold casserole and the gravy boat from last week?  By the way, the gravy boat isn't that great--the lip is really kind of dribbly.

And that's it for this week.  Kinda slim, I know, but maybe things will pick up next week.  Maybe?

Linking up with  Sir Thrift A Lot, Thrifter/Maker/Fixer/Farm, and We Call It Junkin.