Yes, I'm going to start out complaining about the weather again.  On Thursday, we had a high of 70, followed by thunderstorms, 70 MPH winds, and temperatures dropping into the teens overnight.  Saturday was sunny and breezy, with a high of 60.

Work opened at 1:00 which was nice, but really, it just needs to stop.  Now, please. 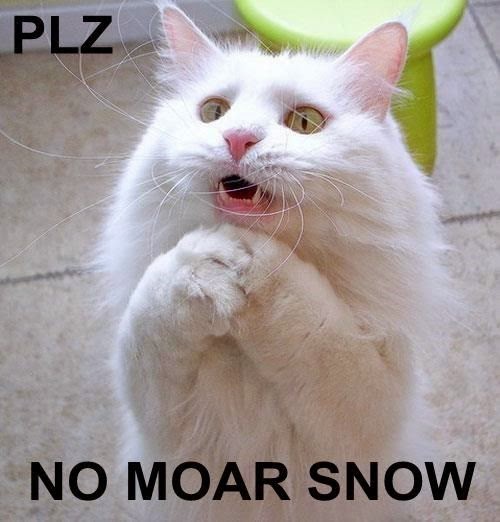 Okay.  Enough of that.  On to more pleasant things.  Well, slightly more pleasant, anyway.  It was not a particularly good week for thrifting, despite being able to cover all of our usual spots.  We'll start off with something different--one of the Hubster's finds!

1.  Another Stretch Vase!  We seem to be finding these fairly often, which is just fine with me.  This is a slightly smaller one, not sure if it's even a foot high.  Hubs sprinted ahead of me and spotted it, so to the victor go the spoils, or something like that.  Savers, $3.00 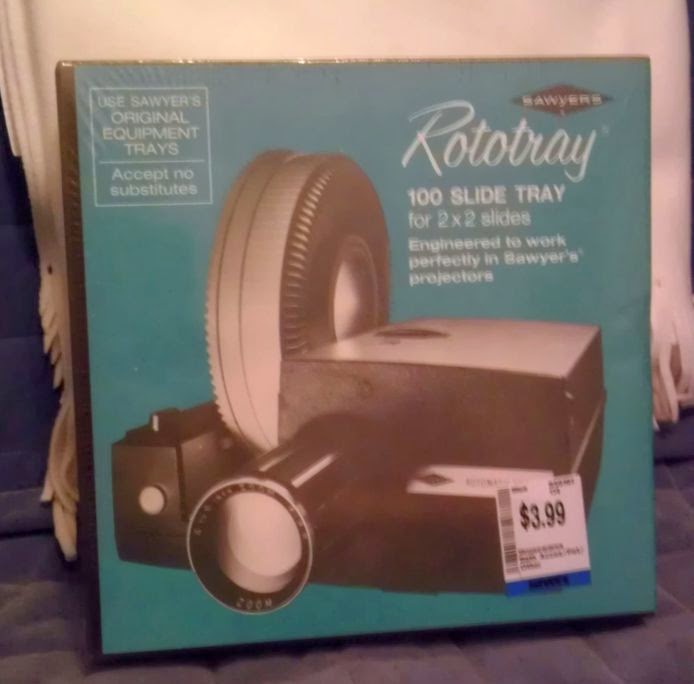 2.  Slide Tray!  This, of course, is for the Crestline slide projector I got some time ago, hoping to find some slides.  Naturally, as soon as I got the projector, the supply of slides in the thrifts dried up.  Still, one likes to be prepared, and this was still in its original shrinkwrap, so how could I resist?  Savers, $4.00 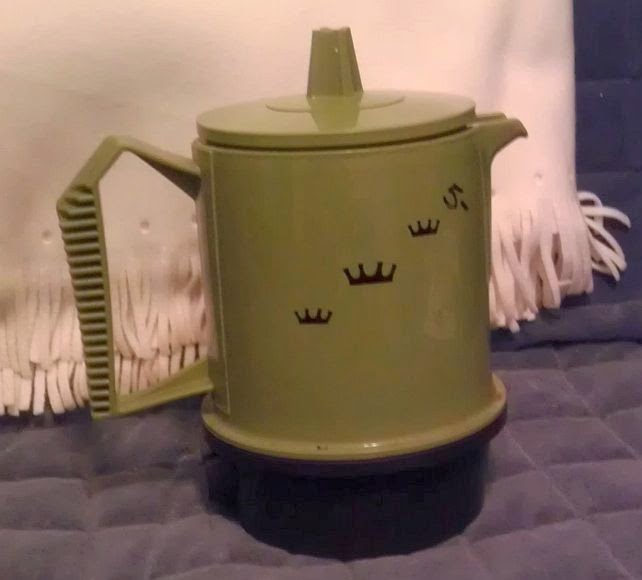 3.  Poly Perk!  I've been wanting a little percolator to use at work because I find those K Cups too expensive, not to mention a huge waste.  All that plastic for one cup of coffee?  No, thanks.  So this looked perfect, or at least I thought it did.  I'm actually going to give it back.  See the "5" above the top crown?  That came off easily with a Mr. Clean Magic Eraser.  Unfortunately, some wiseacre wrote "Hobo Frank" on the other side in Sharpie and I thought I would be able to get it off.  Well, no amount of assistance from Mr. Clean did a thing, nor did straight acetone.  Sorry, but I'm just not going to use a "Hobo Frank" coffee pot.  Especially at work.  Not much harm done, though, as it was only $3.00 at Savers (disregard the "5" as I did.  Didn't even notice it until I got it home.

WARNING!  CREEPY CLOWN ALERT!  SCROLL AT YOUR OWN RISK!! 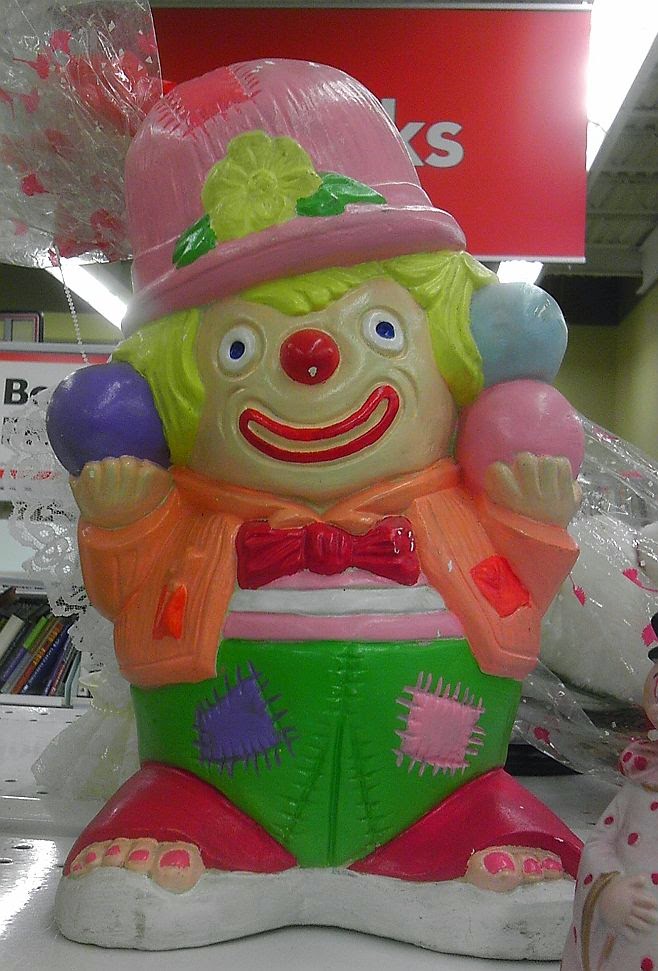 Would you believe me if I said he looked even worse in person?  Maybe it was his size (almost 2 feet tall, I bet), or maybe it was the pink toenails.  I think, though, it was the lines by his mouth that really did me in.  Eek.

Bargain of the Week Department! Lookit--something new has been added. So I guess in addition to my thrift finds, I'll post my BotW if there is one.  This week it's Detergent!  Both Rite Aid and CVS had a buy one, get two free sale on Purex.  We've used it before and I guess it works about as well as any other detergent.  Ninety-nine loads worth for $6.29, which works out to 6.4 cents per load.  Not bad.  Hubster figures we do 7 loads of wash a week, so this should last us over three months.  But we won't even start using it until we've run out of the Sears detergent we got at least six months ago.

Which makes me think of something Smart People say:  Buy it when it's cheap, not when you need it.  To which I would add If you'll use it up before it goes bad and if you have room to keep it.  This won't spoil, so I'm not worried if it takes a while to use up.  And I have room to keep it, so win/win.  Frankly, I'd love to be able to buy one of those huge packages of paper towels, with like 50 rolls.  Unfortunately, I'd have no place to put it, unless I threw a cloth over it and made it into an end table.

What I made Department:


A:  Chili and Cornbread.  Well, I made the cornbread yesterday, but the chili is from a few weeks ago, via the freezer.  What with today's weather, this will be a good dinner tonight. 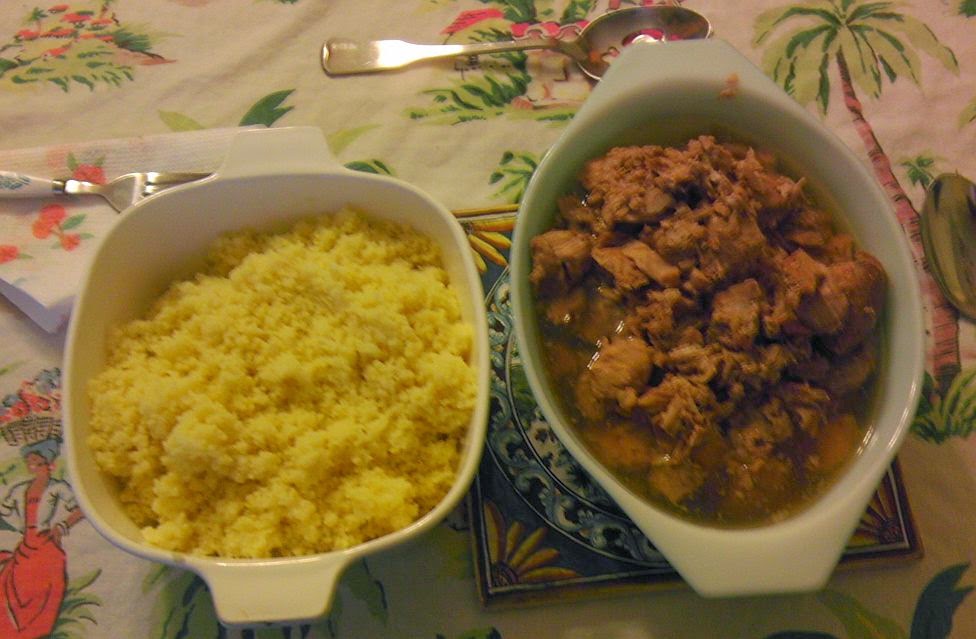 B:  Portuguese Spiced Pork and Couscous.  The pork came from that bigass loin I got a couple of months ago.  it doesn't look like much, but it sure is delicious.  This is something my Grandmother made and Mom made, and now I guess it's my turn.  Mine isn't as good as theirs, but Hubby kept going back later for "just another bite."  So I call that a win.

And that's it for this week.  I'm hoping to have a better week next week, but I realize I say that all the time and nothing ever really happens.  Still, doesn't hurt to cross one's fingers, right?

(Whew.  Accidentally closed the wrong tab and I thought I lost this whole post!  Thank you, Blogger for your excellent Auto Save!)

Linking up with Sir Thrift A Lot, Thrifter/Maker/Fixer/Farm, and We Call It Junkin.