So I'm sure youall are disappointed that I had no post last week.  I didn't want to add to your pain, so I thought I'd pop in today and post the ONLY thing I've been able to find at the thrift stores in a couple of weeks.

But first, let me go on one of my famous rambles.  We didn't get to do much thrifting last week because we went to a wedding. It was lovely, but the whole day was filled with weirdness.  For one thing, hubs and I were THE ONLY TWO PEOPLE IN THE STATE who didn't know the entrance for I70 was closed.  This added a good 45 minutes to our trip, making us exactly 30 minutes late for the wedding.  As we pulled into the church lot, I said "Well, we'll at least be able to catch the end."

Not so.  As soon as we got out of the car, people started streaming out of the church.  Really?  Assuming the wedding started on the dot, the whole ceremony lasted less than half an hour.  Isn't that kind of fast, particularly for a church wedding?  And add in the fact that weddings never start on time.  Oh, well.

So we then headed off to the reception.  Someone (who shall remain nameless) was supposed to be reading the directions and watching the signs because I was busy driving.  Well, that someone kind of fell asleep at the switch and we overshot our turn by like 4 miles.  We finally arrived safe and sound.

Unfortunately, we were seated at a table with one person we know and 9 total strangers.  Luckily, there were two open spaces at another table with friends of ours, so we jumped ship.

In need of alcoholic fortification, I decided to try Scotch for the first time (the bar was pouring the Good Stuff, so I figured it was safe.)  Well.  For those of you who have never tried it, the best way I can describe it is that it tastes like a funeral.  Really, I can't be more specific than that.  It was depressing.

The reception was lovely, though the Mashed Potato Bar (that I had been eagerly anticipating) was a huge disappointment.  They were garlic mashed potatoes, which I can't abide.  The gourmet mac & cheese, on the other hand, was absolutely delicious.

I almost forgot:  One of the guests was wearing a straw hat at the reception.  A straw hat with a huge (8 inch, maybe) bug stuck to the top.

Okay, first of all, why did he think this was appropriate to wear to a wedding?  And worse, why was he wearing it indoors?  I'm sorry, but you take your hat off when you go inside.  It's still a rule.

When we left, it was raining. Naturally.  We wanted to go home by a different route because on the way out we saw a HUGE backup in the other direction that didn't look like it was going to clear up any time soon.  So we put our faith in Jack, our GPS.  Jack's a nice guy, but he's kind of slow, and often quite stupid; he's supposed to route us around backups, but he drove us right into that one on the way out.  So we were a little hesitant about trusting his judgment, but what choice did we have?

I had a brief moment of panic when I saw the "Welcome to Pennsylvania" sign, but hubs assured me it wasn't as bad as I thought.

Part of our conversation on the way home went like this:

Me:  "Man, I just hate driving these winding country roads in the dark.  And the rain.  Why are there no street lights?  Shouldn't there be some street lights?

Anyway, we made it home safe and sound.  Yesterday was spent helping Hubs at the office, so we didn't get much thrifting done this weekend either, but I did find one thing: 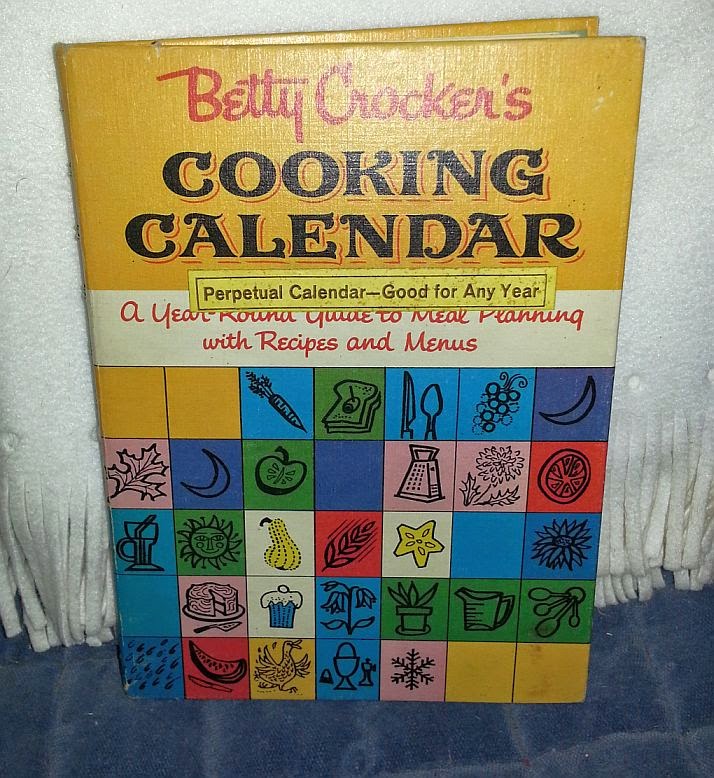 1.  Not another Betty Crocker cookbook!  Yep, 'fraid so.  I have never seen this one before, nor even heard of it.  There's a perpetual calendar on one page and recipes and stuff on the other.  I don't think the calendar would be too useful, but there's a lot of trivia and interesting stuff beside the recipes.  I think this is going to be a fun one.

Okay, so you read through all that just for this.  My apologies.  Hopefully. next week will be better.

I probably shouldn't, but I'm going to  link up with  Sir Thrift A Lot, Thrifter/Maker/Fixer/Farm, and We Call It Junkin because I have no shame.