Thrifting Finds #74: It's beginning to look a lot like

Please bear with me--I have a feeling there's going to be a whole lot of rambling today.  More than usual, I mean.

Okay, to get right to the heart of the artichoke, so to speak, my thrift finds this week were nothing.  Again.  I could tell you how sick I am of looking at crappy Christmas stuff, but I believe we've already covered that in depth.

So this week I'm going to talk about other stuff, mostly Christmassy!  Your ol' Uncle Veg loves Christmas, dontcha know?

In keeping with the season, I've been perusing (again) my collection of Christmas catalogs, mostly from the 60's.  We're talking the major players here--Sears, Montgomery Ward, and Penneys--as well as some Minor League names--Gamble/Aldens, Spiegel, National Bellas Hess.

There are two themes in these catalogs that just kind of surprise me.  And it's not just one company--it's all of them:

1.  His 'n Her's matching outfits.  These catalogs have tons of these outfits--matching shirts, pants, sweaters, jackets, and on and on.  Did anyone actually wear these?  I don't ever remember seeing any couples in matching clothes.  My parents never did this, nor did the parents of any of my friends.  You find this thing throughout the 60's.  Weird.

2.  Slippers.  OMG, each catalog has a section of just pages and pages of slippers--for Mom!  For Dad!  For the kids!  Dozens of selections for each member of the family.  Were cold feet a problem back then?  Were winters particularly harsh?  Was one expected to have a wardrobe of slippers?

In other news, Hubs and I joined the 21st Century!  Those who know us know that we don't watch much TV.  Remember when I dropped FIOS TV?  Generally, we'll get a season of some old show from the library and watch a couple of episodes a night, on my vintage Zenith Avanti: 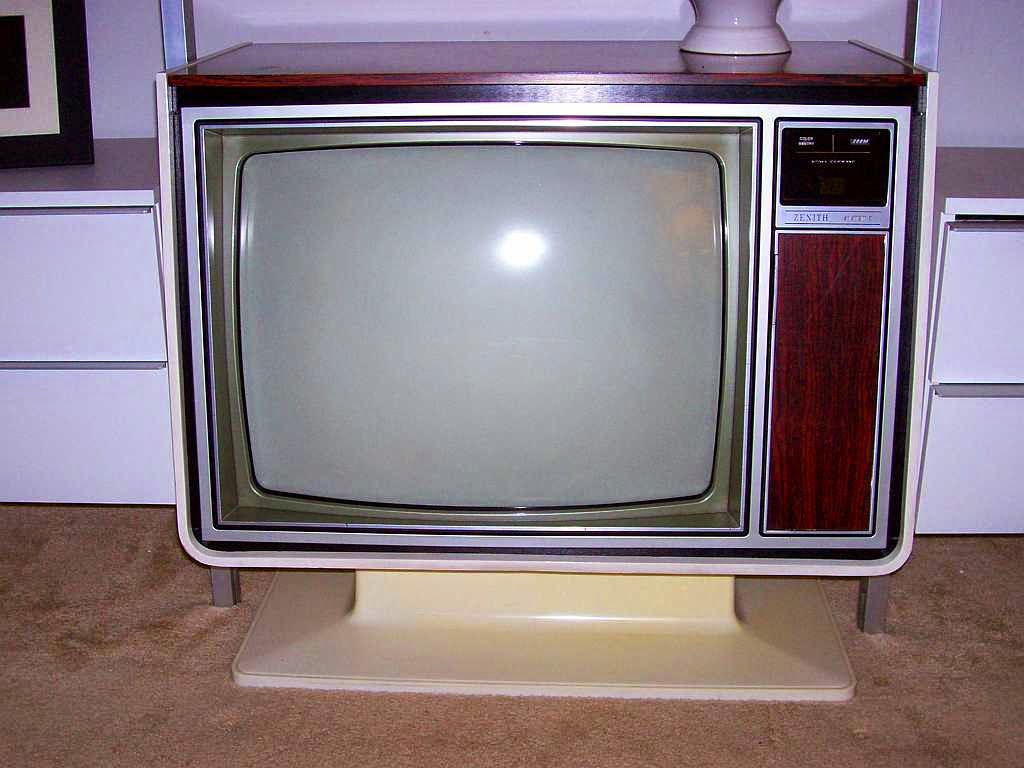 I love the set and it looks great in the den, but it's finally starting to go.  I could try to repair it myself (I've repaired TVs before, with varying success), but it seemed time to maybe upgrade a bit.  So I went out and bought ourselves a Smart TV:

Normally, I hate when my appliances are smarter than I am, but we're loving this.  There is a ton of stuff you can do with this, but so far, we've just watched DVDs and stuff on Youtube (did you know you can get the Christmas 1968 episode of Hollywood Palace on Youtube?  We'll be watching that, for sure!)  I just need to figure out what to do with it.  For now, it's on top of the Avanti, which is a look I hate.  I could mount it on the wall, or I could get a stand for it and trash the Avanti.  What do you think I should do?  Help! 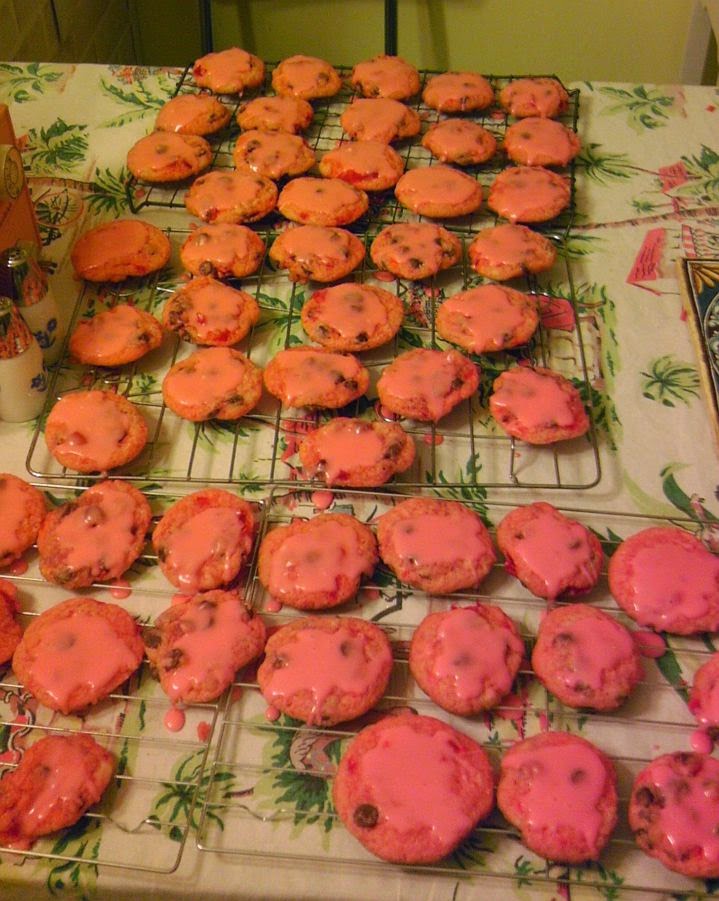 Cherry Jumbles!  I actually made these before Thanksgiving and stuck 'em in the freezer. 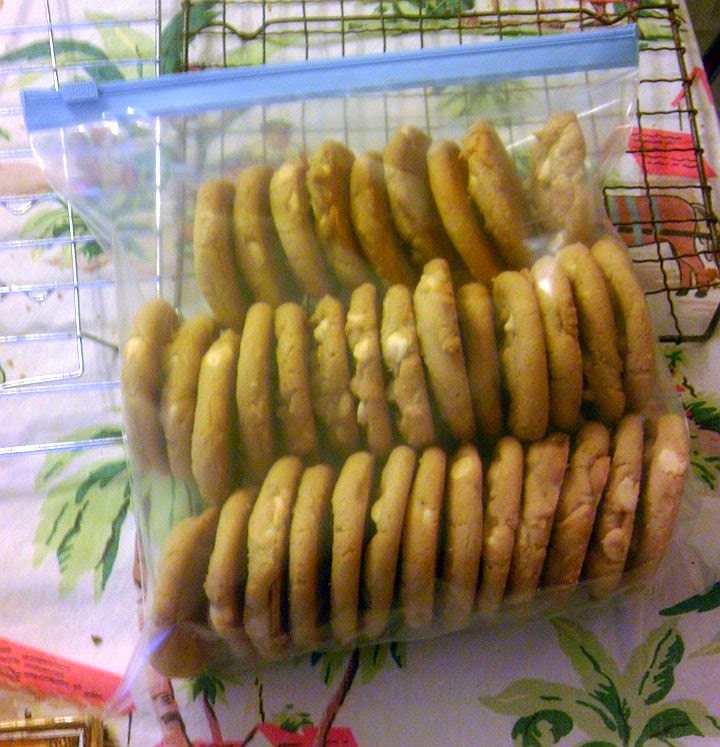 Platinum Blondes!  This picture is a retread from last year, but they look the same.  Also sitting in the freezer. 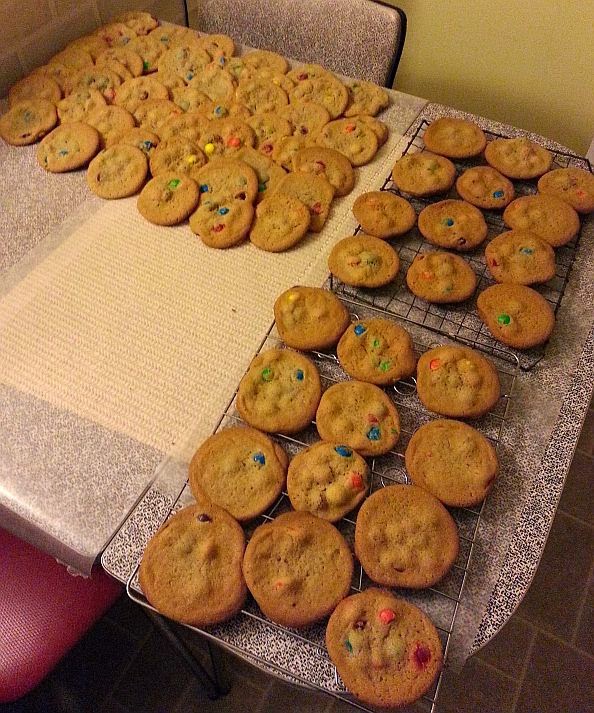 M&M Cookies!  My brother's favorite, and my Yearly Sacrifice (I hate making cookies.)  So far I've made 6 dozen, and have another 6 dozen to go.  But at least I'm halfway through, right?

By the way, I found the best cookie scoop ever.  I went to Bed Bath & Beyond looking for an Oxo scoop, but I wasn't impressed by it.  The I found this one: 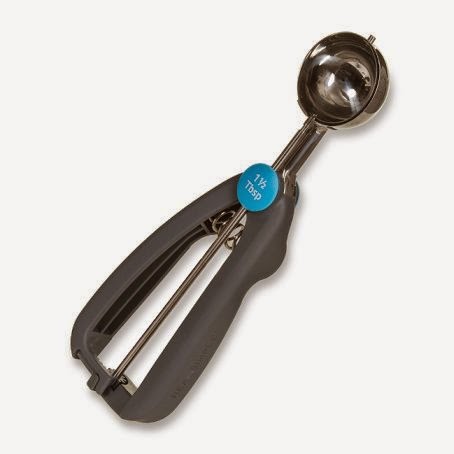 It's super comfortable.  It was 10 bucks.

The House is Decorated!  Anyone who's read this blog for a while will not be surprised by the following pictures.  I have no imagination so I end up doing the same thing every year.  Hubs and I realized just yesterday that we only have white trees this year.  Not quite sure how that happened. 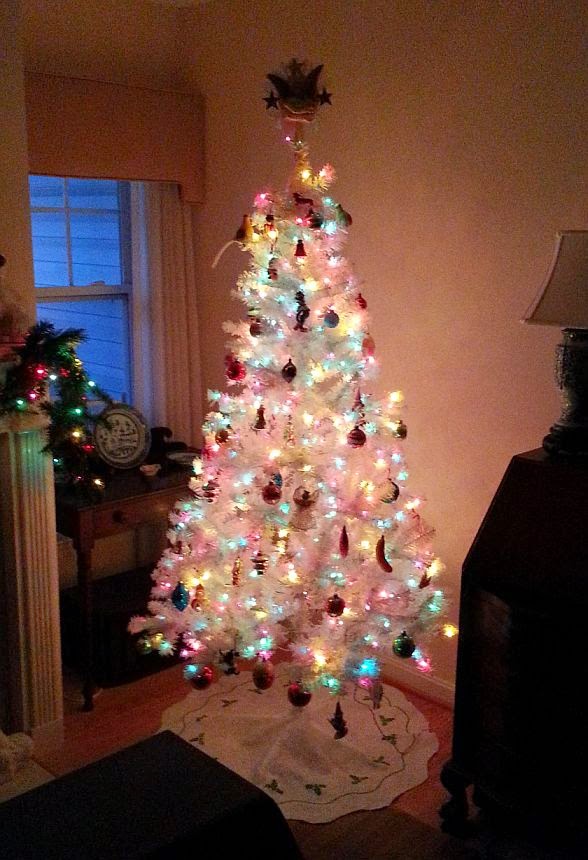 The Big Tree!  I don't know why it always looks pink in pictures, because it doesn't look that way in Real Life. 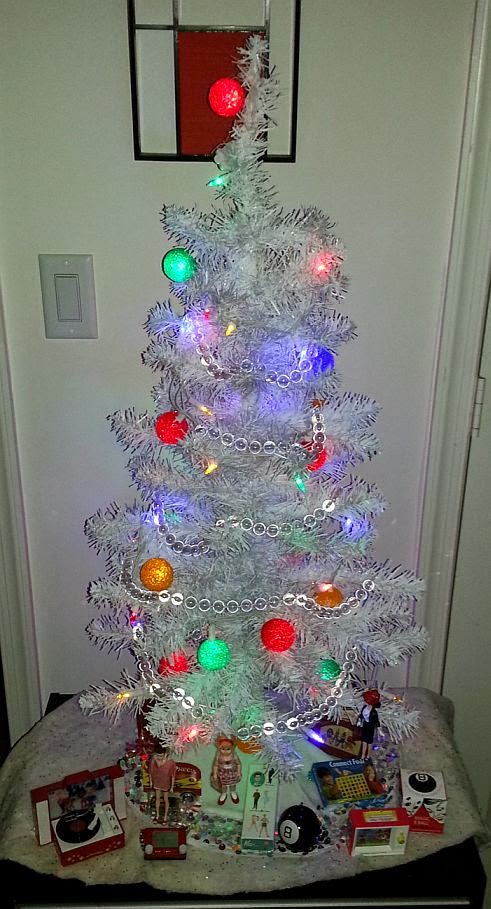 The Hubster's Tree!  The string of lights gave up this year and we had to replace it with LEDs, which I'm not crazy about.  They're too bright for one thing, and the colors seem a little "off" to me.  Here's a closeup of the

Toys Under the Tree!  My goal is to turn this into a vintage toy tree, but until I have enough miniatures, they'll just go under the tree.  Most are Hallmark ornaments, with a few others thrown in.  The Chatty Cathy talks--even makes the "string pulling" noise!  The record player plays "Rudolph".  Loud. 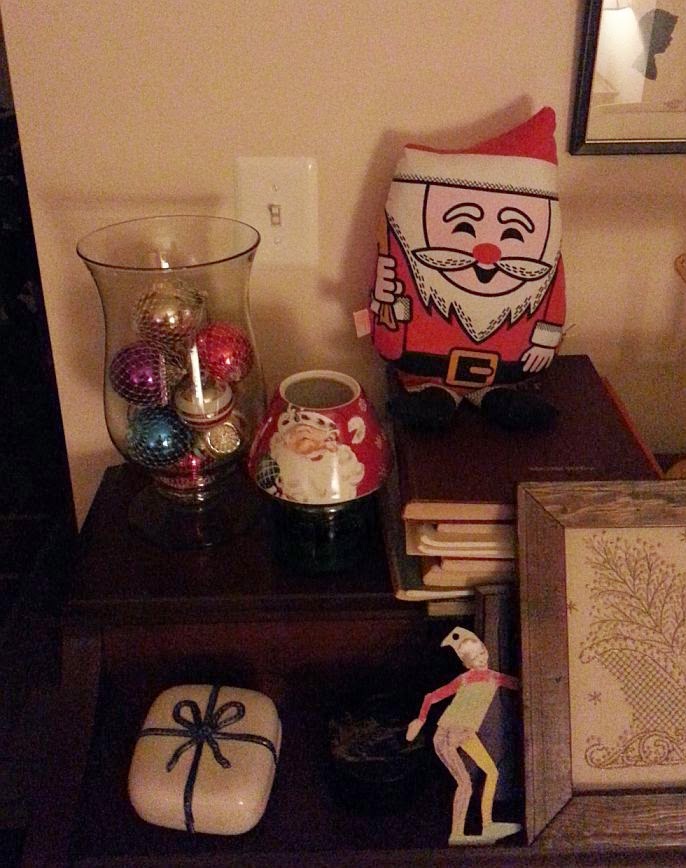 You've Seen This Before!  Shiny Brites in the urn, my Dollar Store candle shade, and the talking Santa pillow I fixed.  If you look closely, you can see the decoration Hubs made when he was just a little tad.  Cute?  I'll say! 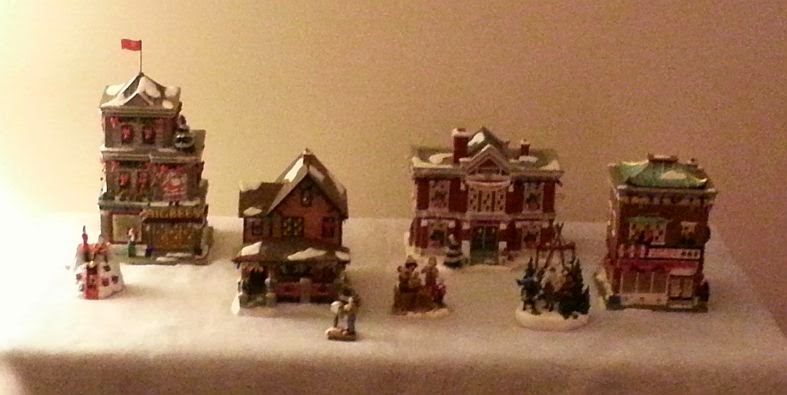 Hohman, IN!  This year, I got to put up my Christmas Story houses 'n things.  These are already a few years old, and far superior the the ones they're selling now.  I'm really glad I got them when I did.  Sorry for the crappy picture--I was using the zoom feature on my phone. 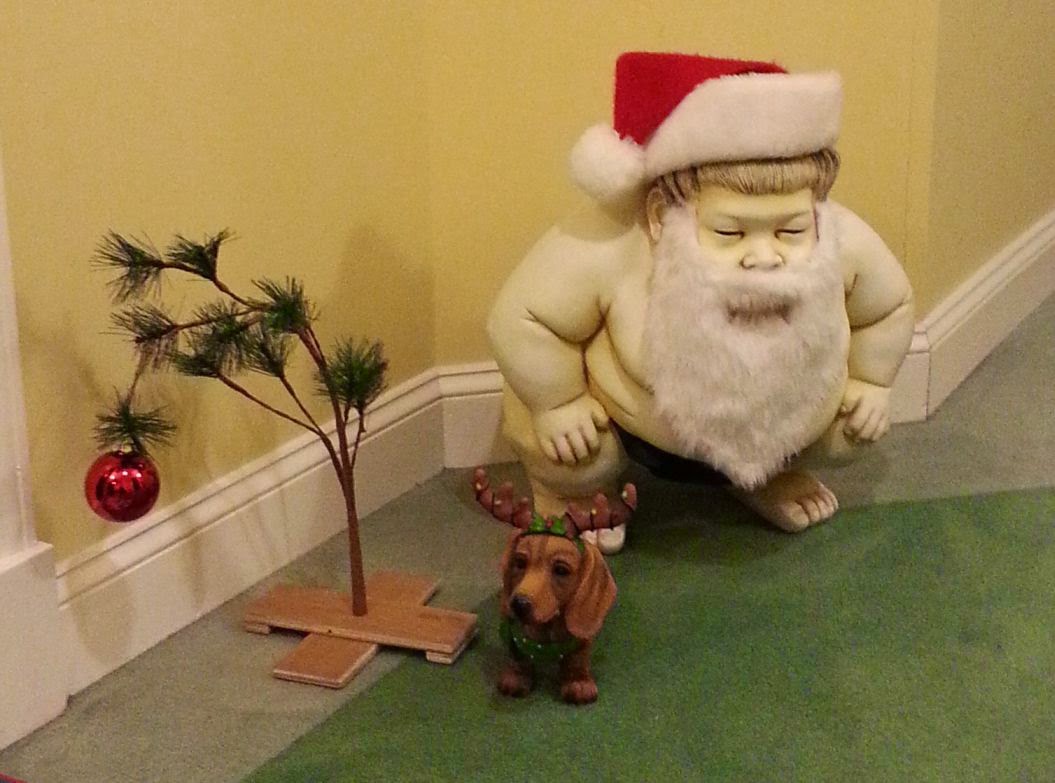 Basho and Tinkles!  They wish you the Merriest of Christmases!! 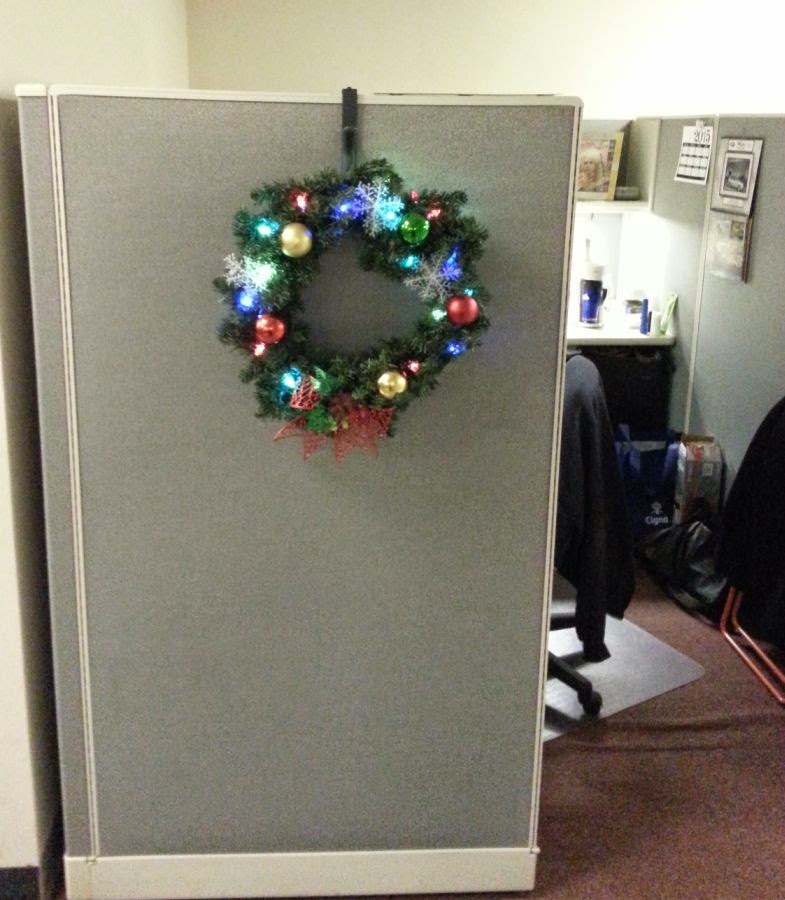 My Cubicle!  Not many people seem to decorate around here, but I thought I'd bring a little cheer to the office, so I made this.  I don't know if you can tell, but there are lights in it.  Other than the wreath itself (4 bucks on sale at Michael's), everything came from the Dollar Store.  I used a lot of hot glue...

And that's about all I can think of for this week.  I think I used more pictures in this post than in any previous one, even though there are no actual thrift purchases.  I guess that says something, but darned if I know what!