Well now, did everyone who got one enjoy their long weekend?  Hubs and I did, though we didn't do anything out of the ordinary.

Well, kinda.  We celebrated Labor Day by grilling these: 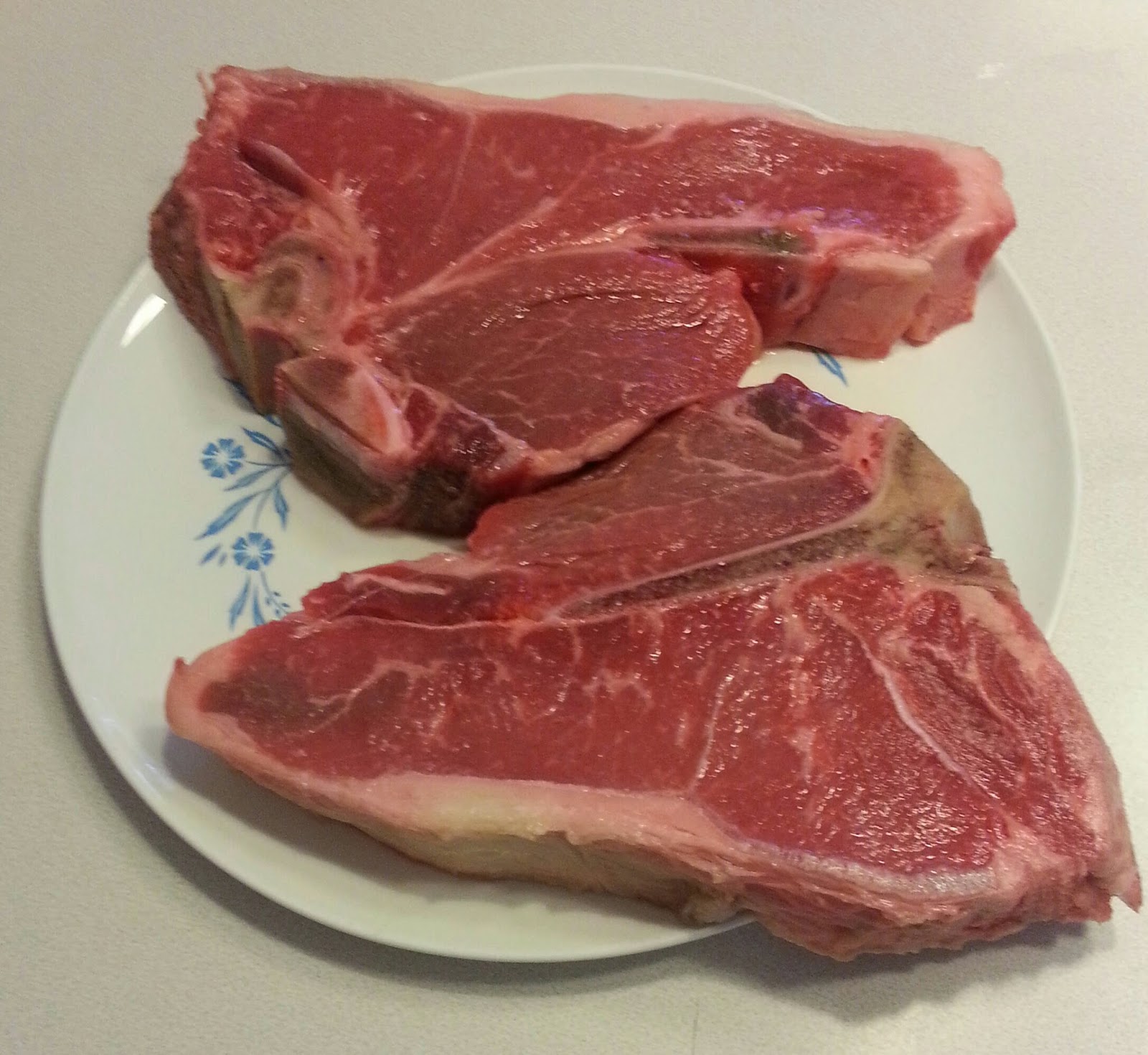 I don't do meat very well, often turning it into leather, but I was inspired to try grilling a Porterhouse by this gal:

They came out pretty well, too!  Little rarer than I care for, but just to Hubby's taste.

Now, does it sound like I'm avoiding talking about our thrifting rounds?  I am, because once again, we found nothing.  Oh, I came across a Spring Green plate that I've been looking for, but there was no way I was about to stand in line to get it.

Saver's must have been having a half-off sale because the place was packed.  With animals, apparently--someone just left a banana peel on one of the shelves.  A banana peel.

You know, if you feel the need to eat a banana while shopping in Savers, you might want to examine your life a little bit.

And the Goodwill we went to yesterday was beyond wild.  Walking in we saw this chick with two overflowing carts--one of clothes, one of crap.  Nope, not waiting in line here either.

The week wasn't completely without purchases, though.  I did get this little baby: 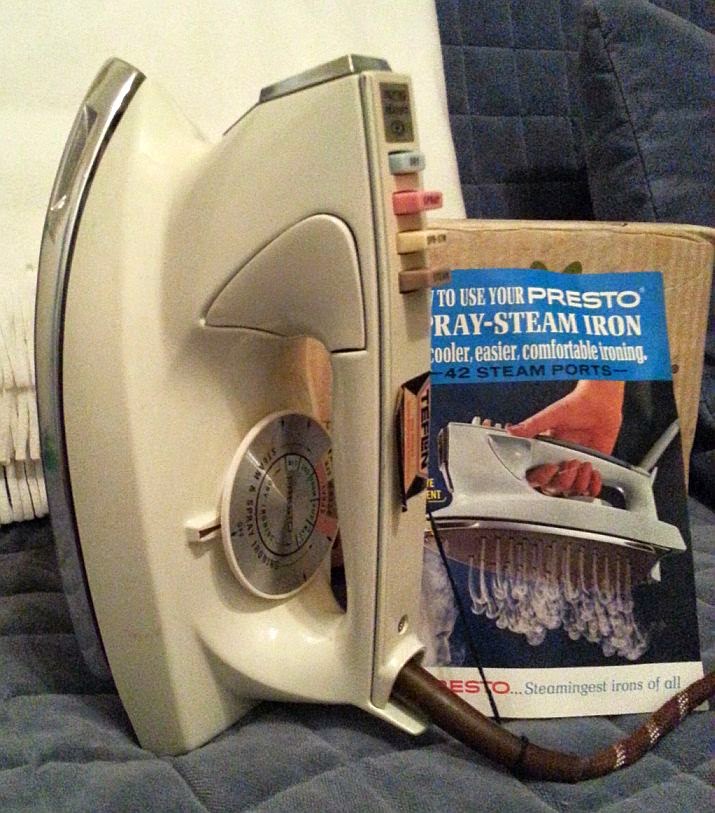 Presto Iron!  In the original box!  Complete with instructions!  Never used!  Because if I'm going to iron (and I do.  Sometimes), I'm going to do it in style.  I already own a similar one in green, but I've knocked it off the ironing board so many times that the thermostat is now wonky.  This was an ebay purchase, which came to about 20 bucks including shipping.  Unfortunately, when I went to unwrap the cord (still in its factory coil) last night, there was an awful lot of crackling, meaning the insulation inside has given up the ghost.  Shoot.  Now I'll have to replace the cord, probably with the one from the other iron.  Or I could just use this for show.

Bargain of the Week Department:

These were on sale at Walgreens: 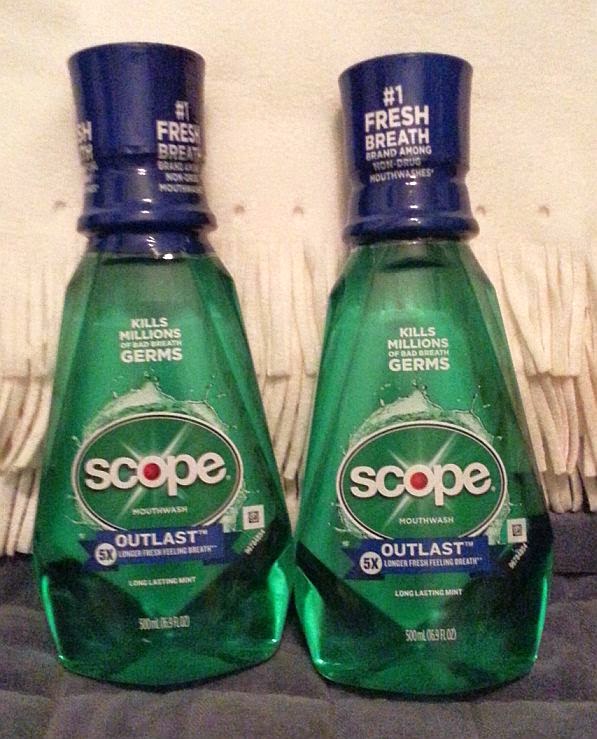 How I averted a Disaster of Nearly Epic Proportions!!!

So I own the world's best "Granny Cart"--you know, those folding wire carts you use to haul your groceries around.  We live on the fourth floor and though we have an elevator, hauling the amount of groceries we buy would be time consuming by hand.  So 11 years ago, I bought the World's Best Granny Cart--big and sturdy, the label said it holds 250lbs, and I believe it.  It gets quite a workout every weekend.

So leaving to do the marketing on Saturday I heard a sound that made my blood run cold.  One of the front wheels crumbled to pieces, leaving the cart with a distinct list to starboard.

O noes! as they say.

What was I to do?  I will never find another cart as good as this one,  Even the store I bought it from has gone out of business.

Once again, as I lay down to take my nap, inspiration struck-- Harbor Freight Tools to the rescue!  I knew they sold tires for hand trucks and such, so I hoped they also sold somewhat smaller wheels.

And indeed they do!  We got two replacement wheels that, while not an absolutely perfect fit, are good enough for what they're for.  Paid 10 bucks for the pair and I've already installed them.  They work nicely, but there's one problem--they stink to high heaven!

The cart lives in the laundry room, which is right off the foyer.  All weekend, we've been treated to the kerosene-like smell of the new tires, combined with the Yankee Candle cinnamon oil warmer thingie. It's a heady aroma, lemme tell you.

It was a little better this morning.  Or else I'm getting used to it.  I think the cart's going to live out on the balcony for a while, though.

Now, it wouldn't be a trip to Harbor Freight if there weren't some free gifts, and this was no exception: 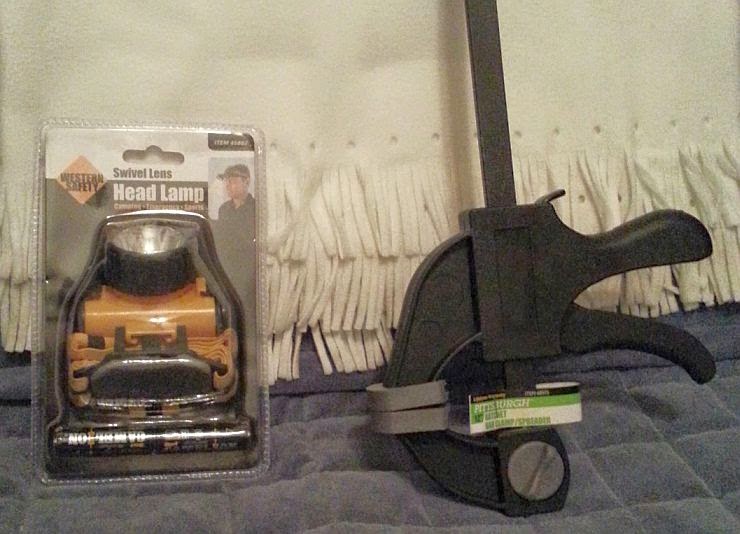 That's a bar clamp on the right for those who don't know.  I'm not quite sure why, but that head lamp makes me think of Wile E. Coyote.  And that it should be marked ACME.

We got two freebies because I made Hubs buy one of the wheels while I bought the other LOL.

So.  While it wasn't a particularly good weekend for the thrifts, there was at least a little bargain gathering, which is fine with me.

Linking up this week with Thrifter/Maker/Fixer/Farm,  We Call It Junkin and The Nifty Thrifty