Hiya, kids!  This week's post is going to be even more random than usual, I'm afraid.  Actual thrifting finds were few (again), but I have a couple other minor things to share, so let's get down to it, shall we?

No, wait.  I want to complain about something first.  Huge surprise, no?  Anyway, I'm reading through all the sale flyers in the Sunday paper, but have you noticed that the latest thing seems to be "buy one, get the second at 50% off"?

That just really irritates me.

Most of the time, I don't need two of something.  And when you do the math, each item ends up being 25% off, which I don't consider much of a sale, do you?  It's not until you hit a 40% discount that I start listening up and paying attention.

Sorry.  I'll try to keep it under control from now on.

Anyway, on to the finds 'n stuff! 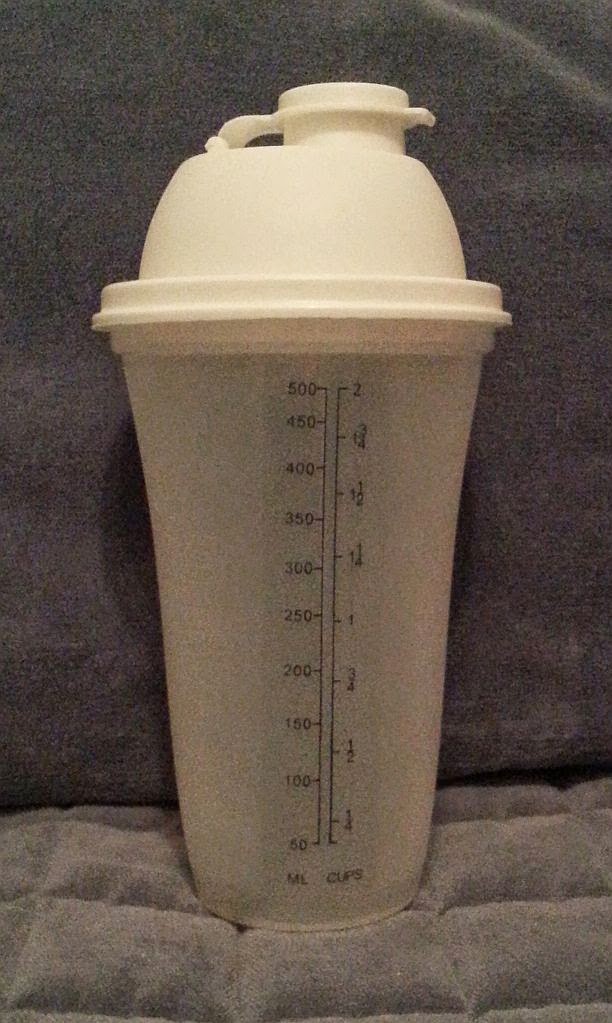 1.  Tupperware!  Sharp-eyed readers will remember that I bought a Rubbermaid jar a couple of weeks ago for toting my half & half to work.  Unfortunately, if I don't remember to take the durn thing home on Friday, I'm out of luck come Monday*.  So this is a backup.  I think it's some kind of diet shake maker, as there's an insert that looks like it's there to break up the lumps.  Goodwill, $0.50.  I think that's the first time I've seen anything for less than a buck at the GW.

*So this morning, I tried using the half & half that was left over from last week.  While it tasted okayish, the coffee was really quite...chunky is the only way I can describe it.  Not good. 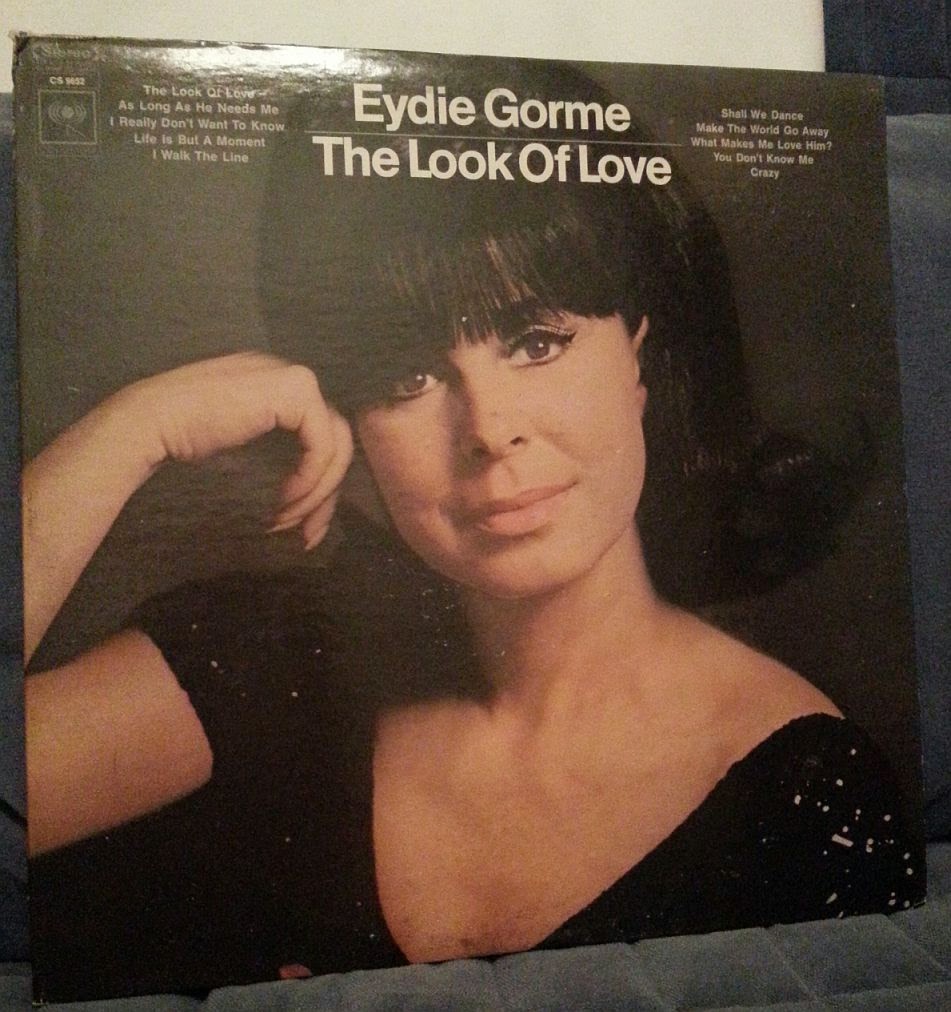 2.  Eydie!  I like Eydie (and Steve, too), but she's not someone whose albums I ever felt the need to own (other than the Christmas album.) This was staring at me from the front of one of the record bins, so what was I supposed to do?  I still don't ever look through the records, but if a good one is staring me in the face, well...  Plus--and this is probably going to be the gayest thing you'll hear all day--look at that hair!  Miss G. is rockin' a truly Marlo-grade flip.  You might not be able to tell from the picture, but take my word for it.  Unfortunately, some wear on the jacket makes it look like her cleavage is dirty.  And that makes me giggle.  And one of the songs is...are you sitting?...I Walk the Line.  Anyone else think that's kind of an odd choice?  Goodwill, $1.00

What I Didn't Buy Dept: 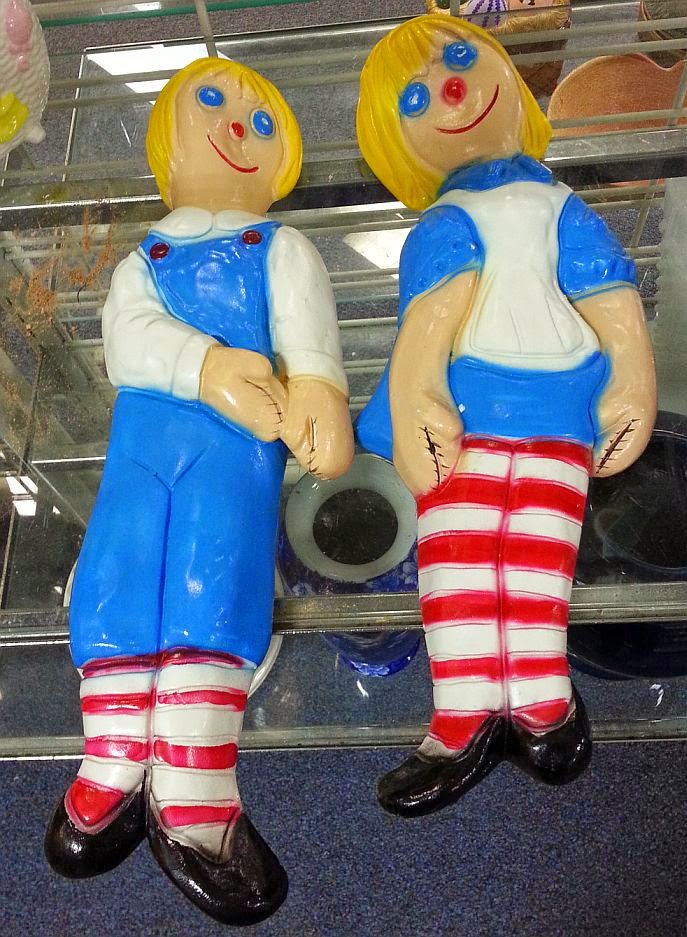 Electromatic Tray:  Couple of weeks ago, I got a Corningware Electromatic heating tray sans cord.  I lamented that the cord I had didn't fit it.  Well, it finally hit me that I'm kind of an idiot.  What I was using was just some random cord I had in my kitchen drawer.  Once I tried an official Electromatic cord, it fit perfectly.  And the tray got nice and hot, so this officially becomes a  five-dollar score!

The Coffee Situation at Work:  Back at my old job, I would make coffee every morning in my West Bend Fiesta Perk (which you can see Mary Richards using in an episode of season two of the Mary Tyler Moore show.  How sad is it that I know this?)  Unfortunately, there are no dish washing facilities close by here, so that wasn't going to work.  I could join the Coffee Club, but it's Keurig-based, and I think I've complained about that before.  So then I got the Regal Poly Pot and tried making instant coffee, and youall heard how well that worked out.  So I finally thought that I should just get a non-Kcup coffee maker (think I can't make this story any longer?  Think again!)  So I went online and found the Black & Decker Brew 'N Go: 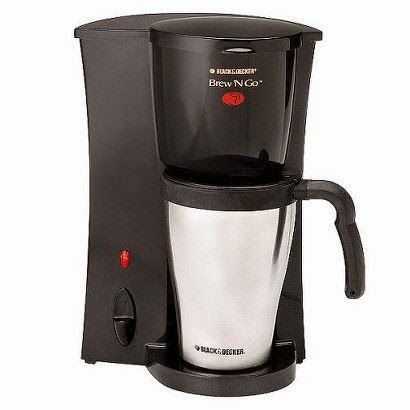 Which got really good reviews at Amazon, Walmart, and Target.  So I went ahead and ordered it from Target because it was like 10 bucks cheaper than Amazon.  Oh, and free shipping?  Yes, please.  It came to 17 dollars and change after sales tax.

Youall may know that I'm not the most patient person in the world, so when I stumbled across a different machine that I could just go to the store and buy, that's exactly what I did. 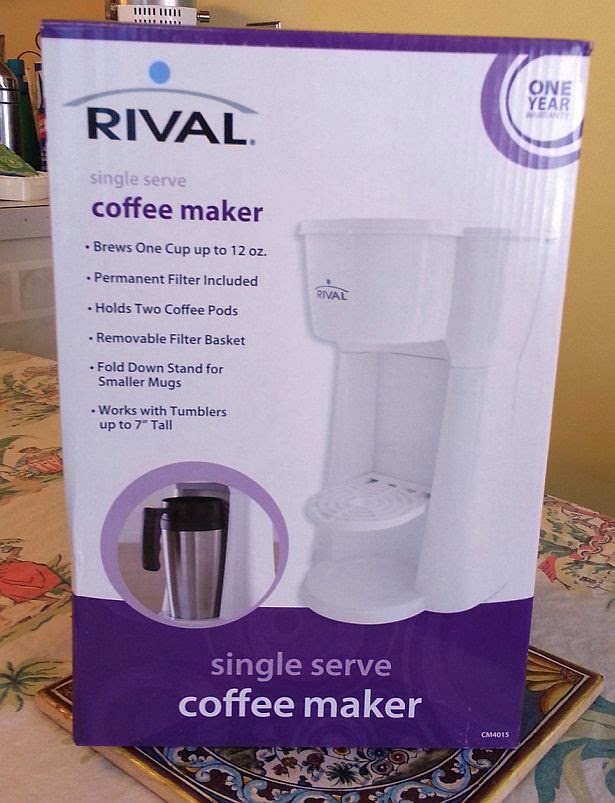 This little baby was nine bucks at Wally World and to be honest, I didn't have much hope that it would work.  Boy, was I wrong!  This cheap little machine makes a nice hot cup of coffee, which is kind of a pet peeve of mine.  I can only drink coffee if it's practically scalding.  It also makes a 12-ounce cup, which is a decent size.  And there's a little shelf thing so you can make coffee in a regular mug or in a travel mug.  Word to the wise:  If you get one of these, try to find a mug that fits as close as possible to the basket, as there's some splashing.  This isn't a problem at home, but at work I like to keep my desk reasonably splatter-free.  Also, some of the reviewers said that the power button is hard to push.  It does require a certain amount of determination, but overall, not a big deal.

So I guess I'm going to give the Black & Decker to someone as a Christmas present.  Or maybe I'll keep it as a spare.

In a word, vanilla!  I got the idea from Coleen over at Coleen's Recipes.  I decided to try it because it's a simple process, there are only two ingredients involved, and I really like high-quality vanilla.  I used to be able to get Mexican vanilla in the Latino section of the supermarket, but all I can find lately is Mexican imitation vanilla.  Really?

So here's what I started with: 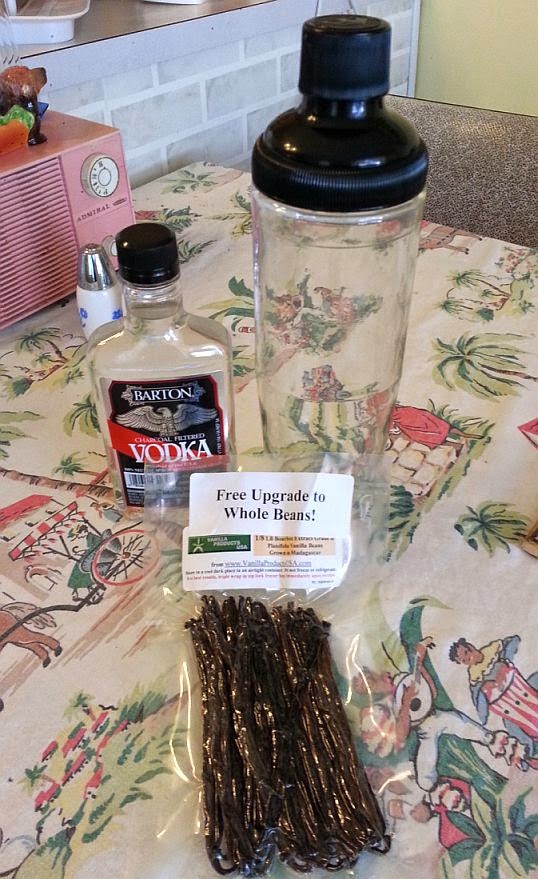 Coleen's instructions call for a quart of vodka, but I determined that that much vanilla extract would outlive me, so I decided to cut the recipe in half.  The beans came from Amazon, the vodka from the liquor store, and the shaker from the Goodwill.  Basically, you cut the beans into half-inch pieces (TIP:  Use kitchen scissors) and soak 'em in the vodka for a month.  When you're done, strain through a coffee filter.
Here's what it looks like after just one week:

Isn't that crazy?  It's so dark already that light doesn't shine through it.  And it smells really good.  I probably should have started this earlier, since Christmas Baking Season is fast approaching, but better late than never, or something like that.

Now let's do a little math.  The beans were 12 bucks, the vodka was 5, and the shaker was a buck-and a half, for a total expenditure of $18.50.  Assuming I get 15 ounces of vanilla out of this (I'm guessing the beans are going to absorb some of the vodka), that comes to $1.23 an ounce.  I think it would have been cheaper if I made a whole quart (4 ounces of beans would be 18 bucks), but the price seems okay to me, as long as it tastes good.  McCormick vanilla was on sale at Weis for $2.00 an ounce, but I don't know if that's high, low, or the going rate.  Anyone?

And that's all I've got for this week.  You're probably tired of reading anyway, right?  Linking up this week with Sir Thrift A Lot, Hey What's For Dinner Mom?, We Call It Junkin  and Vintage Bliss Tuesdays