Weekend thrifting finds, and I created a monster...

Well, the weekend had its ups and downs thrift-wise, but overall hubs and I did pretty well.

Before I continue, a word about the Hubster.  Up until about a month ago, (and you might want to sit down for this), The Hubster didn't collect anything.

Out of the blue, he decided that he was going to start collecting glass barware to display on some shelves in his office.  I think that's great, and now he's started shopping with a vengeance.  Where he used to follow me around in the Goodwill and occasionally chuckle over something I thought was cool, now I can't find him at all because he's run off to find stuff to buy.

He started off just collecting clear glass but soon discovered that that was kind of boring; now he's branched out into colored glassware.  This weekend he bought seven rainbow-colored wine glasses, a vase with three of those stupid champagne flutes that only have a stem, and a gigantic vase that he practically sprinted across the store to grab.

I am getting such a charge out of this! And get this--he's already planning on going thrifting next weekend.  I think I've created a monster.  An adorable monster.

Okay, now for the rest of the story.  We tried the Rescue Mission thrift that our favorite checker at Weis told us about.  There really wasn't much there of interest, other than an end table I would have bought if it had been a pair (did that make any sense?)  Hubs said we could probably skip it next week, but I told him that we have to go back weekly for a while to see how often the stock changes, and he saw the logic in that.

We also went to the new Savers that opened up and enjoyed it immensely. It's huge and very clean and neatly organized.  I wouldn't say the prices are great, but they're okay.  Next time we go, we're going to invest a little more time looking through their Bags O' Random Crap.  There were a zillion of them and it was a little overwhelming.

Cooties!   This fake marble sign was in the first Goodwill we visited on Sunday.  How could I not buy it? Hubs and I decided that we need to find two more so we can each have one at work and one at home.  (P.S.  I bought Lifetime Cootie Protection way back in second grade.  Best nickle I ever spent.)  $3.00 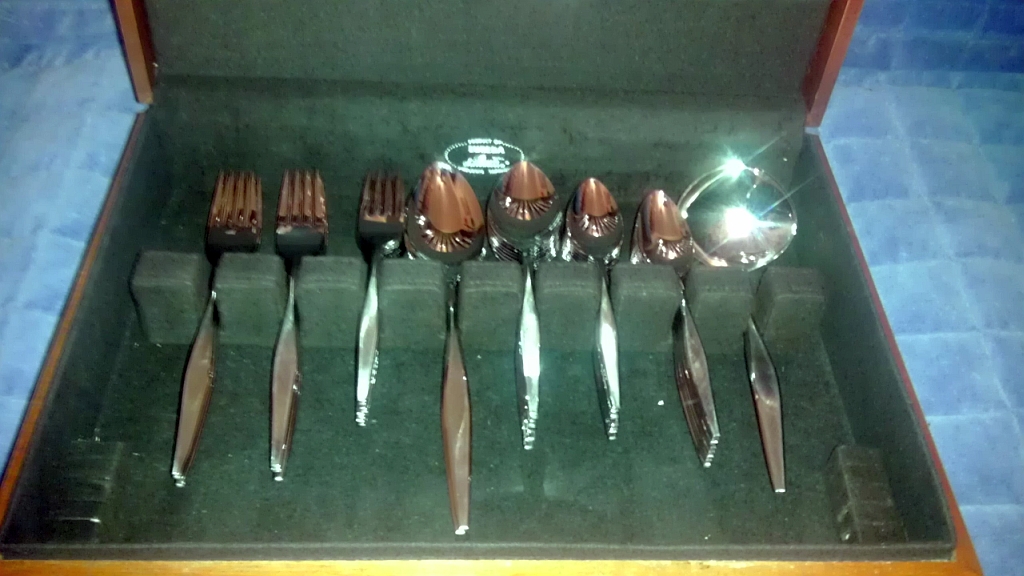 Windrift!  I saw what I thought was a jewelry box, but it turned out to be a silver chest.  Well, stainless chest.  I'm not particularly fond of our current "good" flatware (we don't have "good silver" here at Chez Fondue; we have "good stainless") so when I found this treasure, I snapped it up.  The chest contains service for 8 plus the Hostess Set, and I don't think it was ever used.  There isn't a single scratch, scuff, or mark on any of the pieces.  It's made by Oneida and I believe the pattern is Windrift.  The chest is mahogany, I think.  This was my splurge:  $25.00, but totally worth it.

Vase!  I have been lusting over the 2-foot version of this vase for some time now.  This is the one-foot model, and I think it's in danger of disappearing (hubby wants it.)  Sorry about the condition--it still has residue from the price sticker, and I was anxious to take its picture.  Got this at the new Savers.  $7.00.

Update:  Thursday really is going to be interesting because I officially have everyone scheduled to come the same day.  Let's see if I survive...

Linked up with Sir Thrift-A-Lot