Well kids, the vacation is finally over and it's back to the Salt Mines for your old Uncle Veg.  Naturally, hubs and I spent the last day of our time off scoping out the local thrifts looking for cool stuff.

We found a little.

But first, here's the scorecard for the stores we hit during our time off:

Looking back, I had NO idea there were that many thrift stores around.  Of course, a bunch of them were in Pennsylvania, and a couple were about an hour away, but still.

And you'd think that with that many thrift stores around, we'd have ended up with a lot more than we actually did!  Not that I'm complaining, really.  We did get some good stuff, and with my hoarding tendencies, it's probably best that we keep the purchases to a minimum.

Moving along to what I got: 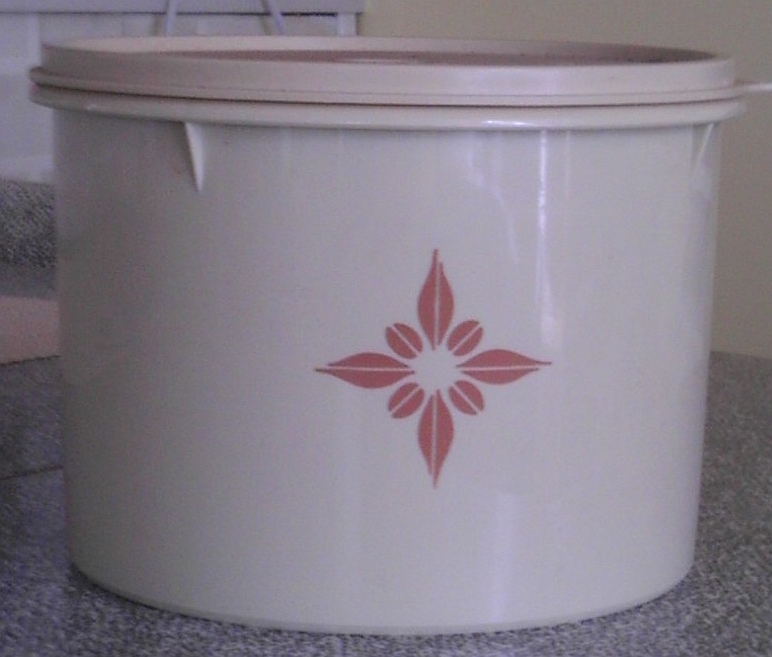 1.  Tupperware!  This looks familiar,but it's actually a slightly larger size than the one I got here.  Hubs said he couldn't fit his hand in the piece I was using to hold sugar (piece in the back), so I picked up this one.  Goodwill, $3.00
And here's a little mini-rant.  What is up with the Goodwill's prices?  One of them had a nice big Tupperware salad bowl, but it was priced at $6.00.  In retrospect, I guess that's really not outrageous, but it was definitely more than I wanted to pay for a used piece of plastic.  Especially when you consider that I got that beautiful, unused cake carrier for $2.00. 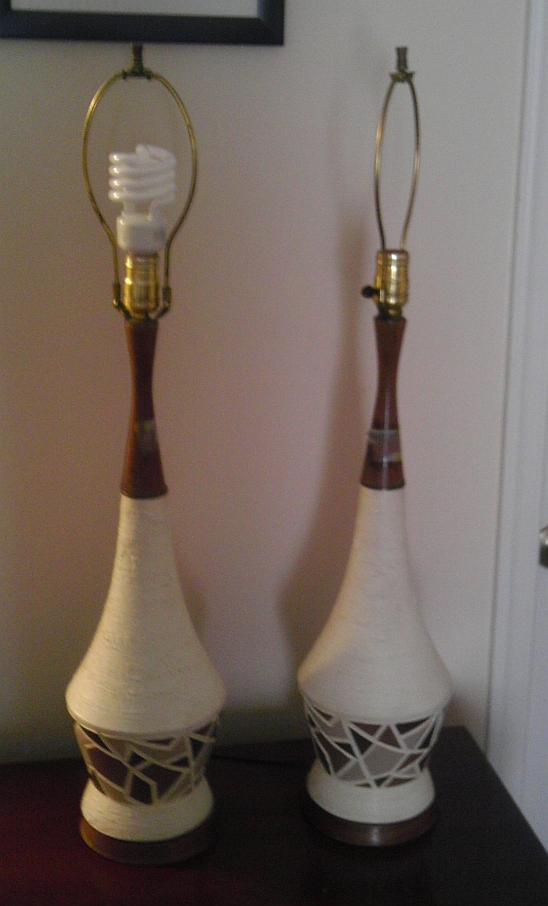 2.  Lamps!  Aren't these awesome?  Well, you'd think so if A) the picture were better and B) the price stickers were off.  A couple of our Goodwills use these price labels that absolutely refuse to come off.  I was soaking these with some Goo Gone when I took the (crappy cellphone) picture.
But back to their awesomeness!  I saw one of these on a high shelf at the Goodwill on Saturday and immediately thought "Ooh, I like that.  Too bad there aren't two of them."  You can imagine my surprise and pleasure when I discovered the mate to the one I saw lurking behind it on the shelf!  Wellsir, it was a matter of a nanosecond before those two beauties were in my hot little hands.  They cleaned up really well with just a bit of soapy water, and the stickers are now gone.  I'm going to live with the colors at the bottom, but I'm toying with the idea of repainting them in shades of blue.  Or maybe keeping some of the brown and adding some orange.  Neither will likely happen because I'm basically lazy.
Ready for the price?  Sit down:  $14.00 for the pair!  I know!  Just like these.
Of course, I still need to find shades, which I think I will probably have to purchase new;  I'm pretty sure we used up our lampshade-finding-mojo when we got these.
Since these lamps are quite narrow, they're slated for our nightstands.  I can't wait!

Oh, and just as an aside, at one of the Salvation Army stores we went to, I spotted the biggest, most beautiful Broyhill Brasilia china cabinet for 200-and-some bucks.  Boy, howdy, if I had a place to keep it, I'd have snapped that sucker up in a heartbeat!  Didn't take a picture, though :(

Linking up with all the fabulousness at Sir Thrift A Lot.